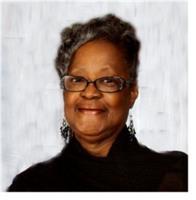 Barbara "Bobbie" Harper, the second of eight children born to the late Charlie C. and Evelyn F. Moore of Denison, Texas, brought sunshine and joy to her parents when she arrived on February 16, 1942. She was a faithful member of Mount Zion Baptist Church throughout her childhood and accepted Christ as her personal Savior at an early age. She attended Denison Public Schools and graduated from Terrell-High School.
Barbara began working at Levi Strauss in Denison for eighteen years as a seamstress. During those years, she made all of our clothes, Frank's two-piece fabric filled plaid suits, girls dresses, and the boys slacks. "We looked good". She worked at Libbey-Owens Ford for over ten years and retired from the Katy House Assisted Living as the Dining Service Coordinator for over ten years.
She met and married the love of her life, Frank Benjamin Harper on October 1, 1975 in McKinney, Texas after they were married, they became a family of six children; Benny, Charles, Jackie, Bridget, Freda, & John Jenkins Later, three more children were born to this union: Erick, Karen, and Darrin Harper.
"My pleasure in life is helping others and making sure when we are together for family gatherings there is plenty home good food. There is much love between my children, brothers, and sisters. All nine children went to college. A servant to me means; in my profession I try my best to serve food that is catching to the eye, good taste and home cooking. The people I serve only have a few things to look forward to, and food is their most concern. I go above and beyond my regular duties to make this happen."
Barbara was a member of Mount Zion Baptist all her life. She served as the Church Clerk, Deaconess, Chairman of Program Committee, President of Choir, and members of Pastor's Aid.
Barbara entered eternal rest on Wednesday, February 5, 2020 with her family by her side in Denison, Texas. She was preceded in death by her husband and her parents, one son Darrin Victor Harper, two brothers William and Curtis Moore, one sister Evelyn Woods and one great-granddaughter Zaiben Jenkins. She leaves to cherish her memories her eight children: Benny Jenkins (Theresa) of Denison, Texas, Charles Jenkins (Ermalinda) of San Angelo, Texas, Jackie Priester (James) of Forth Worth, Texas, Bridget Scruggs of Denison, Texas, Freda Jenkins of Denison, Texas, Rodney "John" Jenkins (Sandra) of Dallas, Texas, Erick Harper (Patrice) of Las Vegas, Nevada, and Karen Ellis (Stacy) of Greensboro, North Carolina.
Her siblings Frank Moore (Anita) of Las Vegas Nevada, Betty Ray of Sachse, Texas, Moses Moore (Kathy) of McKinney, and James Moore of Grapevine, Texas
Thirty-One grandchildren and thirty-two great-grandchildren and a host of other relatives and friends.
Public visitation will be Friday, February 14 from 10:00 AM to 7:00 PM with her family receiving friends beginning at 5:00 PM at Waldo Funeral Home in Sherman.
The Home Going Celebration will be Saturday, February 15 at 1:00 PM in the Mt. Zion Baptist Church, 530 W. Walker Street in Denison. Pastor James Wilson will officiate and her former pastor, Rev. K.W. King will deliver the eulogy. Burial will follow in Oakwood Cemetery in Denison.
Arrangements have been entrusted to James E. Smith and the professionals of Waldo Funeral Home. You may sign the guestbook at waldofuneralhome.com

My deepest sympathy to the family!

Grief can be so hard, but our special memories help us cope. I love you aunt Bobbie and will always cherish the fact that we shared our birthdays on the same day, and I will miss the times where we used to call each other to say Happy Birthday on the 16th.

Youll never be forgotten in my heart, because I know that every year Ill be reminded of you on our birthday...May your soul Rest In Peace!!!!!