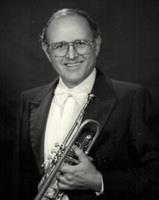 Adelstein, Bernard
April 24, 1928 - September. 30, 2017
Bernard Adelstein, 89, of Sarasota, FL, was born in Cleveland, OH to Frank Adelstein and Rose Hechtman Adelstein. Bernard was a world renowned orchestral trumpet player known for his lyrical sound. He began his career at the age of 16 with The Pittsburgh Symphony followed by The Dallas Symphony and The Minneapolis Symphony, where he served as principal trumpet. Bernard was invited to return to his hometown to join The Cleveland Orchestra as principal trumpet where he remained for 28 years. Bernard travelled the globe touring with the orchestras led by world famous conductors. He played on numerous critically acclaimed recordings. He taught at the Cleveland Institute of Music, Oberlin College, and later was a Professor of Music at Indiana University. In 1994, he moved to Sarasota with his wife, Connie. Regarded as one of the finest classical trumpet players and revered by his many students, he always remained extremely modest about his playing. He was known for his colorful storytelling, his humor and kindness. Highly devoted to his wife Connie, his children and his career, Bernard also loved his summer cottage on Martha's Vineyard. Bernard is survived by his wife, Connie; his children, David of Chicago, IL, Frank of Ithaca, NY, and Marlene of Cottekill, NY; grandchildren, Lisa and Joel Fishbain, and Robyn; and great grandchildren, Claire and Reagan as well as nieces Lyn and Ilene.
Funeral services will be 1:30 PM Wednesday, October 4, 2017 at the Jewish Congregation of Venice, 600 N. Auburn Rd., Venice FL, with burial to follow. Donations can be sent to the American Cancer Society and The Alzheimer's Foundation. Online guestbook at hebrewmemorialsarasota.com. Hebrew Memorial Funeral Services, 2426 Bee Ridge Road, Sarasota, is serving the family.

So sorry to learn of Mr. Adelstein's passing. His recordings with the Cleveland Orchestra are second to none, especially those from the Szell-era!

I was a composition student at the Cleveland Institute c.1970. I frequently spoke with Mr. Adelstein, and sometimes accompanied or conducted for his trumpet students in recital. A fabulous, impeccably brilliant player, and a very nice man as well. I'll never forget sitting in on a Cleveland Orch rehearsal of the Ives 4th Symphony (tremendously complex) one morning in October, 1971. Later that day, I saw Bernie in the hall at CIM and asked him "how do you like playing the Ives 4th?"...

We were so sorry to hear about Bernard's passing. He touched so many lives throughout the years of his life. May his memory be for a blessing.

Connie,
I'm so sorry to hear of Bernard's passing. What a wonderful guy!

Please accept condolences from my family to yours.

Please accept my sincere condolences. May the love and hope God promises along with prayers and support from friends comfort the family during this difficult time.

Dear Connie we are so sorry to hear of your loss and offer our deepest condolences to the family. May the God of all comfort be with you during this difficult time. 1 Thessalonians 4:14

I am so sorry for your loss.
May you find comfort in knowing that the bible calls "God the source of life"
The one who gave life is certainly capable of restoring life to someone who has died.
Acts 17:24,25
Sincerely,
M.W
Sent from Yahoo Mail on Android