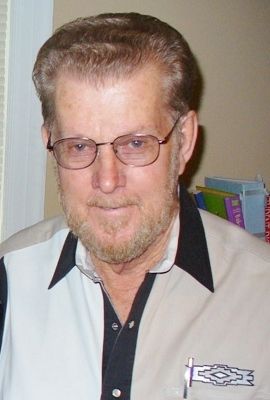 Bobby Conard Lowrey, age 76 of Bald Knob, Arkansas passed on from this earthly life into his eternal one on Tuesday, February 11, 2014 after a long and arduous battle with PTSD and for the last several years, Lewy Body Dementia. Bobby was born March 3, 1937 in Bald Knob, Arkansas to C.V. "Vess" & Lenora Lowrey. Mr. Lowrey served in the United States Navy during the Korean War. He was a business owner who had the gift for gab, an endearing personality and lots of charm. After leaving the US Navy, Bobby learned that he was good, indeed very good at selling used cars. He opened and operated his own used car lot and body shop for many years in Bald Knob. He was civic minded and enjoyed a good political argument. He is preceded in death by both of his parents, one brother, Lionel Lowrey, and one sister, Veda Lowrey Wortham. He is survived by his wife of 32 yrs, Kathy Lowrey; 2 sons, Micheal Lowrey (Trish) and David Lowrey (Amber), of Bald Knob, and 4 daughters, Lisa Lowrey Davis (Jim) of Bald Knob; Anita Lowrey Humphryes (Ronnie) of Cabot, Elizabeth Lowrey James (Steven) of Beebe and Marilee Lowrey Stallings (Nathan) of Bald Knob; one brother, Ronnie Lowrey of Bald Knob and 2 sister, Glenda Pratt of Bald Knob and Carol Diane Marler (Wilbern) of Bald Knob, 14 grandchildren, and 4 great-grandchildren. No public service will be held. Family arrangements were handled through the services of Searcy-McEuen Funeral home. Tax deductible Memorials can be made to caregiving.com Caregifters or mailed to Center for Family Caregivers 3323 W Addison mb 6 Chicago, Il 60618 An on line support community for caregivers. Learn about Lewy body dementia at www.lbda.org Share a Memory: www.SearcyMcEuenFuneralHome.com