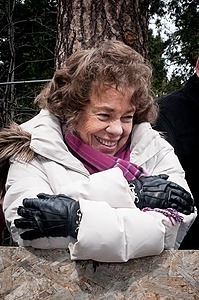 Mrs. C. Susan (Howard) Kurth, of Lake Arrowhead, California, born on May 12, 1938 in Long Beach California, to the late Katherine Agnes Gilchrist and the late Wilbur E Howard, passed away at age 80 on October 3, 2018.

She attended California State University, Long Beach. She was a teacher in the public school system. Cathryn, was known as Susan or Sue, using her middle name, was the loving and devoted wife of Hudson E. Kurth.

She was preceded in death by her brother, Richard Howard; and sister, Jean Howard Kouzes.

Susan had a passion for gardening, transforming raw land into works of natural art. She was a believer in Jesus Christ as a personal relationship.

A celebration of life will be unannounced & private. Family members who wish to attend should contact, elder daughter: Debbie Kurth.

Susan requested no flowers. Any memorial offerings are requested to be given to the ministry of David Jeremiah. Susan was greatly inspirited by his ministry that brought her much comfort in recent years. Donations may be sent to: TURNING POINT, PO BOX 3838, SAN DIEGO, CA 92163. In Memory of Sue Kurth should be written on the check.

One did not need to talk to Susan for a long time to find out the special person that she was. Polite,considerate and convincing she would master the conversation and I found myself listening instead speaking. I felt the need to listen and learn. I initially talked to her as a neighbor and the owner of the most beautiful garden in the Villas. Susan instilled respect and consideration and I felt privileged to exchange my thoughts with her! Such person stays in my memory, without effort. I am...

What a great friend! We have known each other since filming the movie"Fish Food" at her beautiful home. What a wonderful, loving person.

So sorry for the loss of such a good woman, wife and mother.

Never miss an update about Cathryn. Sign up today.