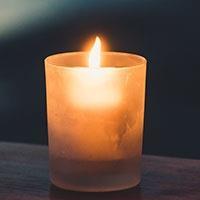 Chester was preceded in death by his parents, and two brothers, Stephen Wayne Hundley and David Charles Hundley.  He is survived by his sister, Kathy (Hundley) Jelinek (husband, John) of Duluth, GA, and a brother, Timothy Glen Hundley, by his nieces, Ashley (Hundley) Kirchaine and Jessica (Jelinek) Morales, and by his nephews, Charles Austin Hundley, David Ryan Hundley, and John Jelinek IV.  He is also survived by many extended family members and friends.

Chester was a graduate of Englewood High School in 1969 and attended Florida State College (formerly Florida Junior College).  As a teen, he helped his father build Trinity Temple Assembly of God on Hogan Road where he learned about the Bible and God’s love for people.  Most recently, he attended Peace Presbyterian Church on Southside Boulevard.  Although Chester faced many challenges in his life, he is remembered as someone who was friendly, kind and helpful, and he was very interested in others and showed it when he asked them questions about their lives.  Chester did his best to live his life according to “The Golden Rule”.

Interment will be in Greenlawn Cemetery, 4300 Beach Blvd. A Memorial Service will be announced at a later date.

In lieu of flowers, memorial donations may be made in Chester’s name to the SCHIZOPHRENIA AND RELATED DISORDERS ALLIANCE OF AMERICA (SARDAA)  Donate to SARDAA (TIN: 33-1213657).

Glad you are home at last...

Thank you for always making me laugh, and all your kind words, you were one of my favorite uncles, the kids really enjoyed spending time with you, this is such a heartbreak to us, we love you and cant wait to see you again in the kingdom of heaven, rest in peace uncle chester xoxo

So sorry we are to hear of chesters death. He was an intelligent, kind and caring man in whom we thank the Lord for the privilege of knowing. Our prayers will continue for the family. We'll trust the Lord to bring comfort and Peace to all our hearts.

So sorry to hear about Chesters passing, I have known him since we were teenagers. He was friends with all in my family. RIP Chester.......Kathy Coroneas Davis......

I loved my nephew, Wilson, with all my heart. I babysat him when he was a baby. He loved people, had a giving heart, liked riding his bicycle. Loved talking together by phone about family and God's blessings. Aunt Esther (Owens) Zink -age 79.

He was a person who fended for himself. He loved to ride his bike and would go all over on it. He tried to help wherever he was .He will be missed greatly.

Never miss an update about Chester. Sign up today.