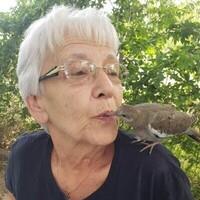 Connie Sue Simantel West was born to Earl Simantel and Esther Wagner Simantel in Hillsboro, Oregon on February 19, 1943. She was the youngest of four children. Connie was raised on her parent’s dairy farm in Hillsboro where she went to school and graduated. She met Staff Sergent William Moore of the Unites States Army after High School and they were married shortly after. Connie was a military wife and traveled with her husband from tour to tour. Traveling during the war gave Connie her love of traveling. Connie and her family moved to Blanco in the summer of 1985. Connie found work at the Blanco Bowling Alley as a waitress. There she found the love of her life, Tiny. Tiny and Connie were married during the winter of 1987 in Blanco. Together they had six children. Connie continued to raise her children in Blanco. She enjoyed going on various vacations with her children and grandchildren. Connie lost the lover of her life, Tiny in 2008. Connie then retired the same year to enjoy her children, grandchildren and great grandchildren.  In 2009 she was diagnosed with breast cancer. She had a mastectomy and was cleared of cancer the same year. After beating cancer, she spent lots of time with her family going on vacations and various cruises. In the beginning of 2021 Connie was diagnosed with Metastatic Breast Cancer that migrated to her spine. She underwent radiation for two weeks. Connie was in and out of the hospital for months with Pneumonia. In the early morning of October 30, 2021 she passed away from complication of Pneumonia.

A memorial service honoring Connie’s life will be held at 10:00 AM Saturday, November 13, 2021 at Crofts – Crow Funeral Chapel in Blanco.

My prayers are with you, Cindy and Jim... I know how close you were to your mom. May The Good and Gracious Heavenly Father comfort you in your loss and may He give you strength to carry on with your girls, other children and your beautiful grandchildren and great grandchildren!!

Never miss an update about Connie. Sign up today.