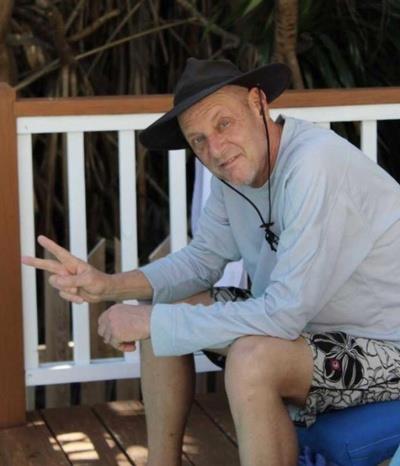 Danny Lloyd, aka Rooster, aka Winston, aka Pizza Pop, passed away on April 25th at the age of 64, “to avoid having to pay taxes for the past year and to avoid another year of his New York Yankees not winning the World Series.”

A celebration of life will be held at 5:00 pm on Sunday, May 20, 2018 at Davidson Funeral Home in Lexington.  The family will receive friends following the service.

Danny is survived by his sons, Frank Callicutt (Beth) and Chris Lloyd; daughters, Abbie Callicutt and Heather Lloyd, all of Lexington and five grandchildren; Mary Lloyd, Anabell and Abbie Callicutt, and Liam and Charlie Blackerby.  He is also survived by three siblings; James Lloyd (Tanya), David Lloyd and Suzie Lloyd.  He was preceded in death by his parents, Charles and Barbara Kimball Lloyd.

He was a generous man – giving away many of his possessions in the months before he died.  He even left his car to twelve different friends, depending upon who visited him last.  He was a life-long ticket scalper and broker, or as he called it “a facilitator of supply/demand economics.”  Once when asked about any regrets from his ticket sales, Danny confessed, “There was that time I told a Carolina fan that he needed to buy my ticket immediately if he wanted to hear Dean Smith sing the National Anthem.”

Danny was cremated – for two reasons:  There could be no viewing since his family refused to honor his request to have him standing in the corner of the room with a sign saying “Buying Tickets” in one hand, and in his other hand a sign saying “Selling Tickets” so that he would appear natural and life-like to his visitors.

Because his brother played football for Wake Forest University, Danny was a lifelong Demon Deacon fan, and he had respectfully requested six Wake Forest pall bearers so that the “Deacs” could “let him down” one last time.

Danny has informed Hampton Inn that they can finally reinstate their pledge to not charge anyone who is not 100% satisfied, as he will no longer be staying there.

For those attending his memorial service, please ignore Danny’s scalper friends who might be offering to upgrade your seat for a small price.  To any crooks reading this:  None of the family and friends attending this service have anything of value.  Remember, he gave his car to a dozen of us.  And one of his sons is Chris “Country” Lloyd, so it is certainly not worth the risk.

Danny Lloyd loved his siblings a little bit, and his children even more.  But those grandkids…they stole his heart.  They were the reason he lived his final 4 years with a sober mind and a giving heart.

We loved him.  And we already miss him.

I cannot believe it has been a year since u left us. I think about u with every event u use to work. ( Masters, Final four, Kentucky derby, etc)

I can't believe it has been a year since you went to heaven. I think of you everyday. I miss you everyday. You were such a big part of my life. You were my best friend and it has not been easy moving on without you. I love you today and I will love you tomorrow. I will love you until the day I come to Heaven. I hope you will be waiting to take my hand so we both can fly high with the angels. I miss my best friend. I love you always and forever. Until we meet again. ❤

Having just been to another NCAA Tournament and The Masters, it sure was different without Danny there. He's not forgotten though as we talked about him at each stop. Rest well my friend.

*I love and miss you so very much! Id do anything to just have one more late night talk with you or one more early morning drinking coffee with you! Your in heaven with uncle Harvey and your parents now!! i will see you again one day! forever love your bebop

I'm so glad I'm not the only one who desire my loved ones to laugh after I go. I told them to please celebrate! Laughter and sweet memories are contagious and long-lasting. This obituary is proof that the way we live our lives can be impacting; certainly makes one reflect and ask: What would people say about me..? The Man upstairs agrees.- Ec 7:2
Many warm embraces to all of you. OXOX

I remember when I was a kid you took me to my first hornet game i was hook!!! I wanted to be jus like you!!I the respect you got from all kinds of people! Lawyers,judges, police, hustlers, I was taught from the best!! To this day I want to be jus like you! But I kno I will never be on your level! the way you did middle deals and the way you close deals was crazy! Jus kno your son is keeping it going tho I love you pops ❤❤

Youre our topic of conversation tonight. You are so missed.

Danny was a great man. Its been awhile since I seen him but I seen him not long ago and we talked like we hadnt missed a minute. He was the best ticket scalper I knew in the lot. He is loved by so many and will be dearly missed. Prayers going up for the family.

I didn't know Danny or his family but I have to say, he sounds like quite the character. The person who wrote his obituary is simply awesome and genius. I wish more ppl would write this way. It made me feel like I actually knew this man and I smiled all the way through. This is a beautiful way to remember someone. I think he would have been proud. God bless you all.

Never miss an update about Danny. Sign up today.