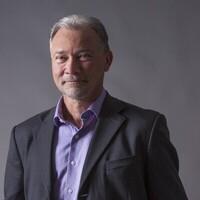 Curtis was born February 27, 1953 where he lived on a farm in Goodrich, ND. Parents William and Alma Fandrich were delighted to add a son to their small family. Carolyn was happy for her long-awaited sibling and soon was helping Mom with his care. Curtis often remarked that his farm upbringing helped prepare him for the hard tasks in his life and even when he was in college, he came back in the summers to help his parents with the farm. He attended Goodrich school for all 12 years, graduating as class president and valedictorian. He graduated from Union College, Lincoln, NE in 1975 with a BA of Science. His goal was always to be a physician. He often told his mother that when he grew up, he was going to help her breathe better.

He attended the University of Health Science in Kansas City, earning his medical degree in 1981. Normandy Osteopathic Hospital was where he did his internship which he completed in 1982 in St. Louis, MO. He started his career in Sydney, Montana where he practiced family medicine doing everything, even delivering babies. Next, he worked in Rogers City, MI and South Haven, MI doing Emergency Medicine.

Dr. Fandrich completed a Masters in Public Health at the University of Michigan in 1995. He often said his   friend, John Machuta, made this part of his education doable as they studied and traveled together to Ann Arbor. By this time, his daughters Meryl and Cara were born and he found it difficult to be away from them.

In 2004, he brought his family to Texas to Houston Spine & Sports Medicine, a sports medicine clinic in Tomball, TX. In 2013 the practice was moved to The Woodlands, TX. Dr. Fandrich brought all his skills, learned many more regenerative medicine techniques through the years and enjoyed working with his nephew, Dr. Shaun Lehmann. When Shaun started the practice in 2003, he often called his uncle for an opinion or advice. They decided they liked working together very much so why not make it more than phone calls and really practice together. They enjoyed many years of working together.

Houston Spine & Sports Medicine has lost a phenomenal physician and person. The staff and his many patients will never forget the compassionate care and friendship he bestowed. Patients speak of his unique attention to detail and for listening to their needs without making them feel rushed. He often remarked that his patients didn’t come to see him by accident. He often prayed with them or for them. Dr Fandrich often remarked that he would never want to be anything but a physician. Being a doctor brought him a sense of purpose and joy, especially after seeing his patients improve.  He always was up to the challenge of a hard diagnosis and finding just the right treatment. He said he had no plans to retire from medicine, only that maybe he would just slow down a bit when the time came.

While he lived in the south for several years at the end of his life, he carried with him many traits as a northern boy at heart that melded with his newfound southern traits.  One of those was his love of hot drinks and he often presented that with his southern hospitality.  He loved coffee and teas and would often bless those that visited with him with concoctions that he discovered and developed mixtures of his own.  Many have enjoyed those hot drinks and conversations with him as he liked to share things that he had learned from his voracious reading habit or thoughts from his favorite movies.  Perhaps his northern roots could explain his favorite holiday being a winter one as Christmas was by far one that he loved and shared that love with all around him.  He was known for having quite a collection of Christmas ties and socks.  So much so, that he couldn’t possibly wear all of them to work in one season and would have to save some for subsequent years.  He was a great gift giver and got great joy from very thoughtfully tuning into the traits of the lucky individual who would receive it.  This trait lent itself naturally to who he was and the profession that was his passion

He always loved traveling. When his daughters were growing up, he made sure to bring them along on his travels and experience all sorts of new adventures. At home, he could never sit still. He always had to be fixing something, maintaining the yard, or learning something new that day. He loved spending time outdoors with his dogs and fishing in the pond in his backyard. He also enjoyed water activities such as wind surfing and boating.

Curtis loved his family very much and was proud of his daughters, Meryl Cabrera (Eric Cabrera), a nurse at Houston Methodist Hospital living in The Woodlands, TX, and Cara Spence (Kevin Spence). Cara was married in May of this year and lives in Mason, MI. He is also survived by his sister, Carolyn Lehmann (Dennis Lehmann), and nephews, Darren Lehmann (Helen Lehmann, Will & Sarah) Shaun Lehmann (Chelsea Lehmann, Hannah & Kayla) and his best friend, John Machuta.

He is preceded in death by his father, William and his mother, Alma.

Dr. Fandrich will certainly be missed.
He introduced me to prolotherapy, and to PEMF. He has helped me so much over the last 10 years. The last time I saw him he took me out to dinner on my birthday.
Thank You Dr. Fandrich for your great service to your patients!

Dr. Fandrich you will be missed. Your love for us as patients is unrepeatable. Rest In Peace my friend.

Dr. Curtis Fandrich was a nice an awesome man that I respect so much, I had the pleasure of taking care of him for 5 months, the time I spent with him was so fun and great. His smile was so infectious an his knowledge and friendly spirit was so beautiful. I will truely miss him. My CONDOLENCES.. goes out to his wonderful family. May his soul rest peacefully.

I am so so very sorry for your loss. I worked with Dr. Fandrich when he was the corporate physician at Steelcase. He was a very special person and I liked him as well as respecting his professional approach to medicine. Many a laugh was had! My sympathies go to his family and friends.....I am sure he will be missed.

He was the most Amazing and beautiful person I have ever met who put everyone else's needs or wants before his own. He always tried to see the best in everyone. He was truly a gift.

Never miss an update about Dr. Curtis. Sign up today.