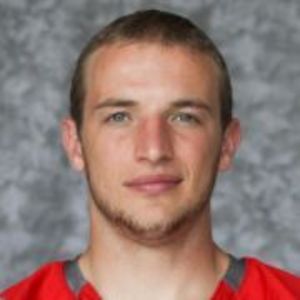 Evan Robert Hansen, 21, of Carmel, passed away on Monday, September 10, 2018. He was born in Atlanta, GA on January 7, 1997, son of Charles W. and Mary K. Defenbaugh Hansen. Evan was a 2014 graduate of Guerin Catholic High School and a senior at Wabash College majoring in Spanish and Biology. He was a Captain and Senior Linebacker on the Wabash College football team, where he earned Second Team All-North Coast Athletic Conference in 2017. Recently, Evan served as a Spanish translator at Merciful H.E.L.P. Center at Our Lady of Mt Carmel Catholic Church. He also worked at Joe's Butcher Shop in Carmel. Evan was a member of Sphinx Club, who consider themselves the guardians of Wabash traditions and provide community service work. Evan entered the world so quickly, the doctor responded, "I have time to go home and read bedtime stories to my kids!" His boundless energy, love for adventure, and infectious smile are traits that those who encountered Evan would find endearing. Not one to feel much pain, he would run into walls, get up, and do it again which is why, we feel, he was born to play football. Interestingly enough, as he matured, his tender spirit prevailed. Offering kind words of encouragement, sharing a laugh, or helping around the house were his mantra. Regarding leadership, he modeled the appropriate actions rather than commanding directives. He was a peacemaker and has left an imprint in our hearts forever until we meet again in heaven. Survivors include his parents, Chuck and Mary Hansen of Carmel; brothers, Carl Hansen of Chicago and Jack Hansen of Carmel; maternal grandparents, Robert and Patricia Defenbaugh of Toccoa, GA; and paternal grandmother, Sandy Hansen of Green Bay, WI. Family and friends will gather on Thursday, September 13, 2018 from 4-8 pm in Our Lady of Mt Carmel Catholic Church, 14598 Oak Ridge Road, Carmel, where the Mass of Christian Burial will take place Friday, September 14, 2018 at 1 pm. A Committal Service will follow in Our Lady of Peace Cemetery. In memory of Evan, donations may be made to the Merciful H.E.L.P. Center. Envelopes will be available at the church. Bussell Family Funerals, Carmel-Westfield is privileged to assist the family with arrangements. Announcement courtesy of Whitlock Mortuary.

My prayers are with the Hansen and Defenbaugh families during this time of trial.

So sorry for the loss of your son. May his soul rest in peace. Prayers for your family.

Evan, never met you but watched you during the football games. You will be missed. Prayers to your family, friends, and Football teammates.

Chuck and Mary, we are so sorry for your loss. Our thoughts and prayers are with you and your family.

My prayer and love are with you

We are so sorry for your loss. Praying for your family.

Prayers to the Hansens and all other extended family for your loss.

I'll remember Evan as a young man with an easy going manner a kind heart
and a gentle soul. May he rest in peace.

With great sadness and a heavy heart, I am writing to you as a parent. I have never met you but both my sons know of your boy Evan, very well. My son Jake just graduated from Wabash and was sphinx club president and was and always will be a Beta. He spoke very highly of Evan in all aspects. My younger son, Riley, now a freshman in the Beta house and a linebacker on the football team loved your son as well. Riley stated on several occasions how Evan took him under his wing and really...

My love and pledge of prayer in this trying time. May Evan now be in the embrace of God who knows the depths of our hearts.
Know that many others understand your pain from their own experiences.
Psalm 62:
My soul, be at rest in God alone,
from whom comes my hope.
God alone is my rock and salvation,
my secure height; I shall not fall.
My safety and glory are with God,
my strong rock and refuge.
Trust God at all times, my people!
...

Never miss an update about Evan. Sign up today.