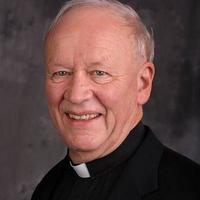 Patrick Joseph Howell, SJ, priest, brother, uncle, friend, a man of God and disciple of God to others, left this world on Thanksgiving Day, November 28, 2019, in Spokane, WA, due to complications with lung cancer.  Pat started his earthly journey with Joe and Virginia Howell on June 9, 1940, in Lisbon, ND.

His passage on earth included many island-like stops in this archipelago of life.  Early years included stays in Duluth, MN, Hettinger, ND, and Renton, WA, before his family settled back in Lisbon when he was 8.  He attended St. Aloysius elementary school and then Lisbon High School where he participated in plays and football before graduating as the class valedictorian in 1958.  He worked in his dad’s drug store and the small community’s JC Penny store, learning the fine art of hosting and taking care of customers.

After graduation, he immersed himself in college life and the honors program at Gonzaga University in Spokane, WA.  In three years and one summer, he completed his bachelor’s degree in math.  During that same journey, the call to religious life, beckoning occasionally through the years, became formative in his thoughts and future (“A thirst is my soul for the living God.” (Psalm 42)).  He joined the Jesuit order as a scholastic at the novitiate in Sheridan, OR in 1961.   The novitiate, high on a hill 50 miles inland from the Pacific set on nearly 900 acres of forested land, allowed for frugal, disciplined, and contemplative training.

Three short years later, Pat was off to Weston College, a Jesuit affiliate of Boston College to obtain a Masters in English Literature and continue studies in philosophy.  At Weston, Pat, along with 200 plus other Jesuits, conversed and became aware of significant changes coming to the Catholic Church.  Then in 1966, Pat returned to the Northwest for his high school teaching regency at Jesuit High in Portland, OR, where he honed his skill at captivating an audience.  Also, as the student newspaper advisor, he took advantage of a Wall Street Journal student newspaper advisory program to learn the ins and outs of news gathering and publication – a skill he utilized effectively over the years.

In 1969 Pat transferred to Rome to study theology where he met church leaders even the Pope.  There he followed changes happening within the church in response to the second Vatican Council, as leadership struggled between past traditions and new risks that were to be taken.

Then, in 1972 he returned to the States, participated in his pre-ordination retreats, and was ordained in a ceremony held with friends, family and Jesuits at St. Aloysius Church in his hometown of Lisbon.  The Jesuits then appointed him Vice-Principal for academics at Jesuit High School, Portland, OR.  Over the next year or two, Pat struggled with significant mental issues, was helped immensely by his doctor, and eventually shared this experience with all through his book titled “Reducing the Storm to a Whisper”.

In 1978, Pat was named principal of Gonzaga Prep in Spokane and served there for the next 5 years, a time he recalled being some of the best 5 years of his life.  Pat then continued his education on pastoral theology at the University of Chicago and later at Catholic University in Washington, DC, receiving a doctorate in ministry of pastoral theology.

Following this time, he moved to Seattle University in 1985 and joined a new program titled Institute for Theological Studies.  He reflected that he could not have been in a better place, joining a dynamic faculty creating a whole new chapter in the Catholic Church and working to validate a faith that does Justice.  Pat eventually became Vice President for Mission and Ministry.

Over his years at Seattle University Pat garnered several accolades and responsibilities.  Besides teaching theology at Seattle U for several decades, he was a Full Professor, Dean of the School of Theology and Ministry, Rector of the Arrupe Jesuit Community, Distinguished University Professor, Assistant and Interim Director of the Institute for Catholic Thought and Culture, author of two additional books, and carried out a special ministry relating to mental illness.  For 9 years, he wrote columns, along with other faith leaders, about religion and spirituality for the Faith and Values section of the Seattle Times.  He also served on the editorial board of America magazine, the national publication for the Jesuits, and assisted three others in making the first translation of Pope Francis’s first interview to English.  Afterwards, he traveled to relay the Pope’s message to community and faith groups in the Northwest.  He was chair and general editor of Conversations magazine since 2000.

In 2019, shortly after publication of his last book, Great Risks had to be Taken, Pat moved to Gonzaga University as special assistant for Jesuit formation of faculty and staff in support of Jesuit mission and ministry.  He retained position at Seattle University as distinguished Professor.

Growing up the oldest of 9 children has its own set of responsibilities.  Gathering in the old 4 door sedan, the oldest held the youngest on their laps in the back bench seat.  That caress and support held true over the years, as Pat helped each of the younger ones in their journey.  Three followed him to Gonzaga.  All sought his wisdom.

He found gardening and arboretums restorative, and likely practiced his nurturing ways in planting, pruning, fertilizing and watering to develop things of beauty.  A man of amazing mental acuity, he never let his brain slumber, learning all the presidents and vice presidents chronologically, and their opposing candidates for election.  Recently, he memorized all the counties of Washington State and North Dakota.  And, a good challenging bridge game always beckoned powerfully.

Not everyone had a chance to be Pat’s friend, but he was friendly and helpful to all.  Perhaps some of the best reflections of his personality and mission to serve God come from his nieces and nephews.  Comments such as:


Pat, may your future journey be as bright and friendly as the path you cut here.

Funeral and internment services are being handled by Hoffner, Fisher, & Harvey in Seattle, and by Holy Cross Funeral Services in Spokane.  Comments to family can be posted on their web sites.

A Vigil Service will be held on

Tuesday, December 10th at 7pm at

Mass of Christian Burial will be held on

Wednesday, December 11th at 10am at

Pat will be missed greatly, although I am filled with pride of a life well lived. I am so proud to say Pat was my cousin. Our blessings to your wonderful family

I remember with joy the brief meetings with Fr. Pat. during my year at SU. He radiated a care and acceptance that inspired me then and now. We were proud of our ND roots.

Father Pat was a wonderful teacher at the School of Theology and Ministry at Seattle University. He will be missed.

Fr. Pat was our Dean at the School of Theology and Ministry and he ensured that we in the MDIV program were able to finish our final year when our program lost Archdiocesan funding through funds from Seattle University. He was like that - empathetic and caring, and going beyond the extra mile to ensure his students were able to attain their goals. Pat understood suffering and what it means to encounter despair and finding hope through that journey - finding God's love and presence in the...

Pat was an authentic human being who lead with grace, taught with integrity and lived a life of wholesome love! I will miss his gentle, courageous and playful spirit and whenever I am out in nature I know I will feel his presence! My deep condolences to all who loved him.

Our thoughts are with you all. Very sorry for your loss

I wish I could have known Pats family, because judging by Ginnys actions and her loving tenderness toward her brother, they must be a remarkable group of people! It was so consoling to me to know she was by his side during the most difficult and poignant time of his life. My husband Dick and I admired him so muchhe was a truly great priest and a fully evolved human being. We are lucky to have known him! Monda Van Hollebeke, GU classmate, 1962.

I was saddened upon reading the announcement of the death of Father Pat.
In my short time here at Gonzaga, I got to know Father Pat by attending some of the meetings he either led or participated in. I now understand more about the Catholic faith than I have ever known in all of my years. Yes, I am a protestant. However, Father Pat somehow transformed faith, commitment, and grace in a way that was incredibly ecumenical. For that, I am glad that our paths crossed here at Gonzaga.

Never miss an update about Father Patrick. Sign up today.