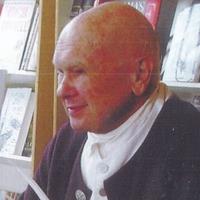 "Greet each day as a gift, each hour as a bonus and each second as an opportunity." - Fred Bauer, 2018

MARBLEHEAD - Beloved uncle, author, photographer, sailor and historical re-enactor Fred Bauer passed into his next life Saturday morning July 3, 2021. He was born on November 11, 1931 to George Frederic and Esther Schlehner Bauer. Fred grew up in Hollywood, PA. After living many years in Fort Washington, PA, he and his wife built their home in Marblehead.  He is predeceased by his wife of 44 years, Jane Pearce Bauer who was a direct descendant of Samuel Bowden, drummer of the Seventh Company, Glover's Marblehead Regiment. He is survived by nephews Rev. John Pearce and Dr. Dale Conner and niece Jane Conner who has served as his legal and healthcare surrogate.

Fred began his creative career writing advertising copy and later performed many roles from television producer to actor to screenwriter. He co-authored, "Fearless Flying: The Complete Program for Relaxed Air Travel" in 1981. After extensive research, he wrote the book, "Marblehead's Pygmalion: Finding the Real Agnes Surriage," which was published in 2011.

Fred performed as a jazz drummer in a Dixieland band. He played timpani for the Bucks County Orchestra and Symphony by the Sea. An avid 18th Century history student, Fred proudly served as drummer of Glover's Marblehead Regiment from 1975 -19 96 and he also portrayed Regimental Surgeon Nathanial Bond. Until recent years, he was a member of Boston Yacht Club and enjoyed many years with a series of boats from the Herreshoff catboat "Aunt Lydia," the 1932 Fenwick Williams yawl "Annie" and, finally, "Tootsie" the Nordic Tugboat which won the 1999 Boston Yacht Club "Best Dressed" for Marblehead Race Week.

A celebration of of life will be held at old North Church, 35 Washington Street, Marblehead, on July 8th at 1 pm.

The Memorial Service was a fitting tribute to Fred! We in Glover’s Regiment will miss him greatly but will keep his memory alive. Sincere condolences to his family and friends.

Never miss an update about Frederic. Sign up today.