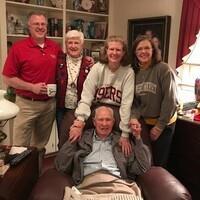 Frederick Reames Fowler of Mullins passed away Saturday morning, August 8, 2020, peacefully at home surrounded by his wife of more than 60 years and family. He was born October 15, 1931, in Green Sea, SC, a son of the late John W. Fowler, Sr. and the late Mittie P. Fowler. He was co-founder, owner, and operator of Carolina Furniture House from 1959 through 2011, when he retired ah his son Rick re-established the business. He was a lifelong member of the First Baptist Church, during which time he served on the Board of Deacons, was a member of the Whosoever Will Sunday School Class, and a leader of the Royal Ambassadors.

Mr. Fowler attended Mullins schools where he was an exceptional athlete, lettering in multiple sports. Upon graduating from Mullins High School in 1952, he was a member of the state champion basketball team, the state champion, track team and runner-up for the state champion in football. He was named to the S.C. All-Star Football Team and the prestigious Tobacco Bowl Team. At the 1952 State Track meet, he was declared the outstanding performer on the field when he won three events and set state records in the mile and half mile runs and narrowly missed a new SC high jump mark. He continued his athletic career at Presbyterian College where he was a member of the varsity football and track teams. He was a member of Pi Kappa Alpha fraternity.

Fred will be remembered for his humor, his fun-loving laughter, his devotion to his family, his generosity and accommodating spirit towards everyone. He was friendly to all, quick with a joke, and never met a stranger.

Services for Mr. Fowler will be held Tuesday morning, August 11 at 11:00 A.M. in the Sanctuary of Mullins First Baptist Church. Burial will follow in Cedardale Cemetery, directed by Cox-Collins Funeral Home.

Visitation for Mr. Fowler will be held from 9:30 – 11:00 A.M. in the Mullins First Baptist Church Fellowship Hall. Masks are required and proper social distancing rules are to be followed during this time and the service.

Ann, Teresa, Brenda, Rick, and Family - I am so sorry to hear of Mr. Fred’s passing. While I’ve lost touch with the family I will also remember his laugh and good nature. Please remember how blessed you have been, and still are, and I hope you can truly celebrate the many memories.

Ann, I send my deepest sympathy to you and your family in the loss of your dear Fred. It has been many years since our time together at Coker, but I will always cherish those memories. My heart is truly with you and your children during this time of great sadness. I wish each of you peace and comfort in the days to come.

Much love to the Fowler family. My love and prayers are with you all. Love, Kathleen

Aunt Ann, Rick,Teresa, Brenda and family, we are sorry for your loss. I remember Uncle Fred’s humor and joking personality very well. My dad thought the world of him, he will be truly missed. We are praying for you through this tough time. We love you all.

Dear Mrs. Ann, Girls and Ricky,
I was so sad to hear of Mr. Fred’s passing. I know he is OK, but I’ll surely miss seeing him around. What a great man he was! Always something funny to say about my daddy. Mama loved him too. He was with them when they got married. I’ll be praying for all of you. Much love and sympathy, Barbara Anne and Chandis Alford

Mrs. Ann, Rick, Teresa, Brenda and family, Jim and I are so sorry for your loss. I have such great memories of all the times I shopped at Carolina Furniture with Mr. Fred. He certainly could make me laugh with his humorous wit You all are in our thoughts and prayers, and we are only a phone call away if you need us for anything. There was only one Mr. Fred and he will be greatly missed by so many people,

Wishing you peace and comfort during this difficult time. Deeply saddened to hear of your loss.

I am so sorry to read about the passing of Mr. Fowler. He was a magnificent business man. It is my prayer that the God we serve will continue to bless and keep each of you

Ann, I am so very sorry to hear of Fred's death. He was fine fellow who was well thought of by all whom I had contact with when growing up in Mullins. My thoughts are with you and the family.

Never miss an update about Frederick "Fred". Sign up today.