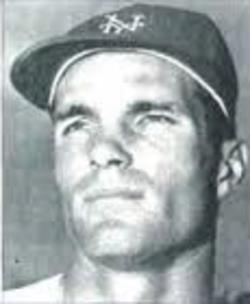 Gary Alan Kolb, 79, of Cross Lanes, WV passed away July 3, 2019 after a long illness and was surrounded by his family.  Gary was born March 13, 1940 in Rock Falls, IL to the late Ernie and Josephine (Baker) Kolb, where he grew up playing baseball, football, basketball and track.  He was considered one of the best all-around athletes at Rock Falls High School, where he graduated in 1958 and is a charter member of the Rockets’ Hall of Fame.

Kolb signed with the St. Louis Cardinals in 1960 after attending the University of Illinois where he was attending on a football scholarship.  On September 29, 1963 he came in as a pinch-runner, replacing Stan Musial after Musial’s final career hit.  An outfielder and utility man, Kolb played seven seasons of Major League Baseball with the Cardinals, Milwaukee Braves, New York Mets and Pittsburgh Pirates.

He retired from baseball in 1972 in his final season with the Triple A team of the Pirates, the Charleston Charlies and made his home in Cross Lanes.  He became instrumental in developing and enhancing the Little League program in Cross Lanes and then went on to coaching the Babe Ruth League to multiple championships.  He was an honorary member of Ruth’s.

After baseball, he worked for Green Valley Bridge Construction, alongside his good friend Vernon Withrow and officially retired in 2003.

In addition to his parents, Gary was also preceded in death by his first wife, Georgia; his brothers, Terry Kolb, Marc Kolb and Jeff Kolb; his sisters Marlys Shaffer and Jill Hayes.  He is survived by his wife Jeani Hurley; his daughter, Lisa Hughes; his son Todd Kolb (Valerie) and grandchildren Matt Hughes, Jordan Hughes, Max Kolb (Danielle), Keegan and Ariel Orellana.  Gary is also survived by his sisters Paula Deyo and Judy Duis; brother Jack Kolb all of Rock Falls/Sterling, IL, sister-in-laws Lou Ann Kolb and Susan Hurley, brother-in-law Don Hayes, along with many nieces and nephews.

A special thank you to his doctors and nursing staff at the Endoscopy Group at CAMC-Memorial, Fresenius Kidney Care and all those in the CPICU for the extra special care you provided.  Dr. Mohamad Sankari, thank you for putting up with his jokes and always bringing a smile to his face.  He treasured your friendship through the past few years.

A Celebration of Life will be held Saturday, July 13, 2019 at Tyler Mountain Memorial Gardens in Cross Lanes, WV.  Family will be received at 2:00, with friends following from 3:00-5:00 and the service held from 5:00-6:00.  The family is asking those in attendance to share their favorite memories or stories of their times with Gary.

In lieu of flowers, the family requests that donations be made in Gary’s memory to St. Jude Children’s Hospital.

Cooke Funeral Home of Nitro is assisting the family with arrangements.  Memories of Kolbie may also be shared by visiting www.cookefuneralhome.com.

After the last game of of the 1969 season In the Pirate clubhouse in old Forbes Field, I will always remember that you were the only player to congratulate me on a good season. I have often thought about that time and wish I could have told you in person of how much that meant to me. What a classy gesture from a classy teammate. Rest in peace my friend and teammate. Prayers to your family. Carl Taylor 1969 Pirates

Gary, your 1964 Topps Baseball Carl was beautiful. May you sleep in heavenly peace

Thank you so much for all the joy you brought to me and millions of other baseball fans. And thank you for your time in making your fans feel a part of the game, too.

Lisa, Todd and your entire family will be in my thoughts and Prayers. Kolby was a "one of a kind" and a great coach/teacher of the game of baseball. To this day, I continue to pass on his baseball lessons learned from Gary Kolb over 40 years ago. God Bless.

Kolby, you were not only the best coach I had, but the most inspiring. Thank you for the role you played in making me the college player I was and the coach and person I am today. I will always cherish those summers on the diamond, and working together on our fencing jobs.

I grew up in Pittsburgh and Gary was the first batter I ever heard announcer Bob Prince introduce and give play by play on. I followed him that year (68) and in 1969 before he went down to the minors. Always wondered about him after that. Nice to hear that he had a nice and productive life after baseball. God Bless you Gary for that lasting memory and all the best to your family.

Lisa and Todd, You know you all have been a part of our family for many years..! Your Dad taught me to be a better hitter while playing in Big League. He taught me the nuances of the game and to respect it. I remember you all, Georgia, and Gary coming over to watch Steeler games in the 70's. What a great time to be a Steeler fan with you all and Gary..! Lots of laughs, stories, and great wins..! You all remain in my heart and in my prayers..!

My condolences to the Kolb family for your loss, may God bless him and your family. Gary was the head coach for the 1981 and 1982 Senior Babe Ruth All-Star teams I was proud to be selected to play on. Gary coached us to 2 straight state titles that I will always remember. He was a good coach and a good man.