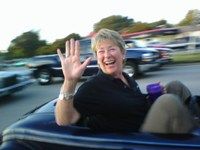 Gaye Ann Leeny, 56, of Pleasant Ridge, MI, passed away on Thursday, March 5, 2009. Gaye was born March 23, 1952 in Detroit, MI to James V. Leeny and the late Naomi Leeny. She was raised in Detroit as her father was a Detroit Police Officer. Following high school, Gaye traveled through Europe and visited many beautiful sites. She loved to travel. She was also very fond of the many national parks our country has to offer and made the effort to visit every park she could. She was also a business owner, being the proud owner of Rainbow Graphics in Hazel Park, MI. She also worked as a designer in the automotive industry working with auto proto types. Although she took great pride in what she did, she will be remembered most for her involvement in the founding and opening of an all women's camp located in Owendale, MI. "Windover" as it was called, welcomed everybody and each person that arrived was greeted personally by Gaye. She was the kind of person who made everyone feel welcome and encouraged everyone to get along. The camp has gone through many road bumps along the way including opposition and Gaye was the driving force that has made it the wonderful environment that it is today. Windover recently celebrated its 20th anniversary. Gaye never had a bad word for anyone. She was well loved by all who knew her, and her incredible work ethic was to be admired. She labored lovingly with all things so everything would come out just right. Her friends were all long time friends with some going back to grade school. She was always the one to keep in touch with family. Gaye was also very close to her father, James. She will be greatly missed by all who were blessed to have known her. Gaye is survived by her loving partner, Janie Plunkett Henderson. She is the cherished daughter of James V. Leeny (late Naomi) and loving sister of Susan Chase (Michael), Dawn (Leeann), Sandra Stulberg (Daniel), and Jamie (Stephen). Also surviving are step-children Bill Plunkett (Jenn) and Andrew Plunkett (Ellen), as well as step-grandchildren Madelynn and Christian and her niece, Naomi and nephew, Ben. Family will receive friends at A.J. Desmond & Sons (Vasu, Rodgers & Connell Chapel) 32515 Woodward Ave (between 13-14 Mile) on Saturday, March 7, 2009 from 3-7pm. A memorial service will be held at 6:00pm at the funeral home. The family has suggested that memorials be made to the charity of your choice in Gaye's honor.

Never miss an update about Gaye. Sign up today.