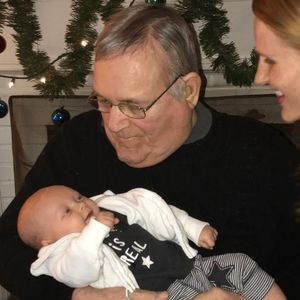 George Alfred Lewis of Westfield died peacefully on Saturday December 22, 2018 surrounded by family. He was 87. Known to his family as Geo, George was born May 17, 1931 in Syracuse, New York to Alfred J. Lewis (a high school principal) and Elizabeth (White) Lewis (a home maker). He was predeceased by his beloved wife of almost 60 years, Barbara Betham Lewis. He is survived by his son Peter of Wake Forest, NC and daughter Amy of West Orange, NJ, a granddaughter Jessica Heiple of Milford, NH and a great grandson Jameson Heiple (who Geo had the thrill to meet and hold last month). Geo graduated from Manlius prep school and Wesleyan University in Middletown, CT. After service in the U.S. Army he embarked on a career with the telephone company in data processing management roles, first with New York Telephone and then AT&T. After stints in Syracuse, Utica, NY and Albany, NY he was transferred to a position in NYC and settled in Westfield in 1964. For 54 years Westfield was an anchor in his life. Living first on Harding Street and then Canterbury Road, he was one of a generation of great Westfield fathers who commuted to NYC, raced home to coach little league, grilled steaks on weekends, and volunteered for the organizations that make this town run. He served in board positions at The Westfield Y and the Westfield downtown commission. He served on the board of his Wesleyan fraternity, Alpha Delta Phi. Geo found joy at the Westfield Tennis Club where he was the long-time treasurer. A passionate tennis player, he is missed by his doubles partner and great friend of 50 years Alex Williams. For many years he umpired at tennis tournaments across New Jersey. As a linesman at the U.S. Open he drew curses from Jimmy Connors over a line call that Geo claimed for all his years that he was right and Connors was wrong. George loved history, especially Europe from 1920 to 1945 and World War II. Much of his focus was on Winston Churchill. He traveled to England many times and served on the board of the International Churchill Society. Much to Barbara's chagrin he amassed a large collection of Churchill memorabilia that filled most corners and shelves of their home. The man was always reading multiple books which he seldom let go of—there are over 2400 books in his basement. St. Paul's Episcopal Church was very important to George. For many years he served as an usher and he volunteered on church finance and building committees. He was a man of great faith. His ashes will be buried in the garth at St. Paul's joining Barbara (and Barbara's parents) He loved his nieces Leslie, Susan and Kyle and his nephews Nicky and Stephen. He built a special and strong bond with his caregivers Marlynn and Isabelle who were always at his side in his later years. He was lucky to have great relatives by marriage-Nancy Mullane, Rob and Kolbe Heiple, Kathi Lewis, Nancy Gould, and Joe Hehn. Geo loved hanging and chatting with his guys—over lunch at Chrone's Tavern, at the tennis club and at Princeton where he audited classes with friends for over 20 years. He was a compulsive list maker. Technology befuddled him--he never touched a computer, struggled with a cell phone, answering machine and tv remotes, and he was absolutely amazed at the concept of Facetime when he first saw his great grandson. He drank a Tito's vodka martini at 4:30 pm every day. He watched the Yankees and the Giants and was a huge fan of UConn women's basketball. A lifelong Republican, he hated paying taxes. He was a good and active stock picker, devouring the Wall Street Journal and annual reports. He did The New York Times cross-word puzzle (in ink) every day. And he was proud to call Westfield home. Geo was a kind and generous soul. He touched many lives. He will be missed. A memorial service to celebrate his life will be held at St. Paul's church in Westfield at 11:30 am on Saturday January 19, 2019. Arrangements by Gray Funeral Home, Westfield. You may go to grayfuneralhomes.com for on line condolences.

I had the pleasure of attending Mr. Lewis' estate sale today, and now own many pieces of his. I was moved to pay respects to Mr. Lewis. He seems to have lived a full and varied life, with many interesting facets. Godspeed to him and his family. May he rest in peace.

Pete & Amy - Sorry to hear of your Dad's passing. I always looked forward to when your family would visit your Betham grandparents, my Uncle Herb & Aunt Doris for a week or two at Lake St. Catherine, VT in the summer. Its been many years since then, but I recognized the pictures of your Dad straight away. Glad he got to meet his great grandson Jameson. I'll definite raise a martini soon in his memory. Your 2nd Cousin, Peter

Offering our sincere condolences. May the God of love comfort your heart and make you firm in your time of grief. 2 Thessalonians 2:16,17.

My father in law (ex but we did not let that alter our nearly 50 year connection) died on Saturday.

He was kind, moral, loyal, and he hated squirrels. He was an old school family man.

One of his biggest joys was his granddaughter Jessica. He and Grammy arrived at the hospital within hours of her birth and stayed closely connected throughout her life.

Knowing the importance of family, Rob and Jessica made the trip to New Jersey...

My fondest memories of childhood are of our summers at Lake St Catherine in VT with our grand-parents, my parents and siblings, Aunt Barbara, Uncle Geo, and cousins Peter and Amy. He was a great man and although he will be missed, I know he is where he was happiest...with Aunt Barbara. Leslie Gould