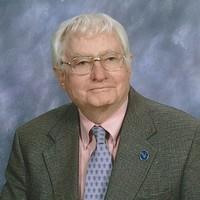 Not the right person? See All ›
AGE
95
LOCATION
Radford, Virginia

Beloved pediatrician, husband, father, grandfather, and loyal UVA alumnus passed into the presence of his merciful Savior, Jesus Christ, on January 1, 2020 at the age of 95.

Dr. Hall was born on July 16, 1924 in Pulaski. He was the son of Glenn C. and Ella Kate Brown Hall. He was valedictorian of the Pulaski High School Class of 1942 and received a B. S. degree from the University of Virginia. During his senior year of college, he was an organic chemistry instructor. While in his third year of medical school at UVA, he was elected into the Alpha Omega Alpha Honor Medical Society. After graduation from medical school, he received a fellowship in Pharmacology. Upon completion of his residency in pediatrics also at UVA, he served in the United States Army during the Korean War as Captain in the Medical Corps – Chief of Pediatrics 3rd Army Headquarters.

In 1952, Dr. Hall established the first pediatric practice between Roanoke and Abingdon, which eventually became New River Valley Pediatrics, and practiced for fifty years. He served on the Governor’s Committee for Child Abuse from 1980-84. He was a member of the American Medical Association, American Academy of Pediatrics, Virginia Medical Society, Virginia Pediatric Society, and the Southwest Virginia Medical Society. He was also a member of the University of Virginia Sigma Xi Scientific Research Society, Alpha Omega Alpha, Rotunda Society, and the Cornerstone at the University of Virginia. He was a past president of the Radford Rotary Club, a member of the Science Club in Pulaski county, an elder in the Presbyterian Church, and received the Hugo Unruh Award for Outstanding Community Service in 1980. Dr. Hall was a long-time member of the Virginia Student Aid Foundation and past board member. For more than thirty-five years he was class representative of the University of Virginia Medical School Class of 1948.

In 2005, Dr. Hall was predeceased by his loving wife of fifty-six years, Betty Palmer Hall.  Seven years after her death, he married his high school girlfriend, Betty Ann Tourney Hall, who predeceased him in 2016.

In lieu of flowers, memorial contributions may be made to the Presbyterian Children’s Home of the Highlands, PO Box 545, Wytheville, VA 24382.

Funeral services will be held at 2 p.m. on Saturday, January 11, 2020 at The Presbyterian Church of Radford with Rev. Anthony Mathenia officiating. Interment will follow in Oakwood Cemetery in Pulaski.

The family will receive friends from 4 until 7 p.m. Friday evening at the funeral home.

The Hall family is in the care of Mullins Funeral Home & Crematory in Radford, Virginia.

I remember Dr Hall as my pediatrician for many years. But what I remember most was a story someone told me about his dedication to the UVA Cavaliers. Someone told me Dr Hall became physically ill if UVA lost on Saturday. Rip in peace Dr Hall.

a kind man who will be missed

I remember well Dr. Glenn Hall and family when I was growing up in Radford, VA, as we lived just up the hill from the Halls on "pill hill" in Radford beginning in 1960 when I was age 11 until I grew up and left home. He and my father were colleagues. I can tell you that Glenn Hall is head and shoulders above the common man--that he was the quality of individual that Planet Earth needs more of. It has been an honor to be acquainted with Glenn Hall and his family, and his life has...

Sarah, Glenn and Libbie, your Dad was one of the best and kindest men ive ever known. It meant so much to Carter and me to work with him in the lab and to call him our friend. He was truly a gifted pediatrician. Prayers are with you.

A wonderful man and doctor. He was so good to me as a new mother. Loved him. He will truly be missed.

Dr. Hall was my pediatrician until I entered college. Even now, decades later, I am so sad to hear of his passing. He lived his life well and made the world a better place. I will never forget him. Blessings to his family.

This wonderful Dr. delivered me and I saw him into my teens. He served his community very well by being a great physician. May all his remaining family know he was appreciated. Angela Thompson

Prayers for the family. He was my children's pediatrician. I was an RN in the office above him and always enjoyed seeing and talking with him!

Dr. Hall was my pediatrician when I was younger. He was always so nice and helped me feel comfortable at the doctors office. Wish the family the best.

Never miss an update about Glenn. Sign up today.

The Presbyterian Church Of Radford