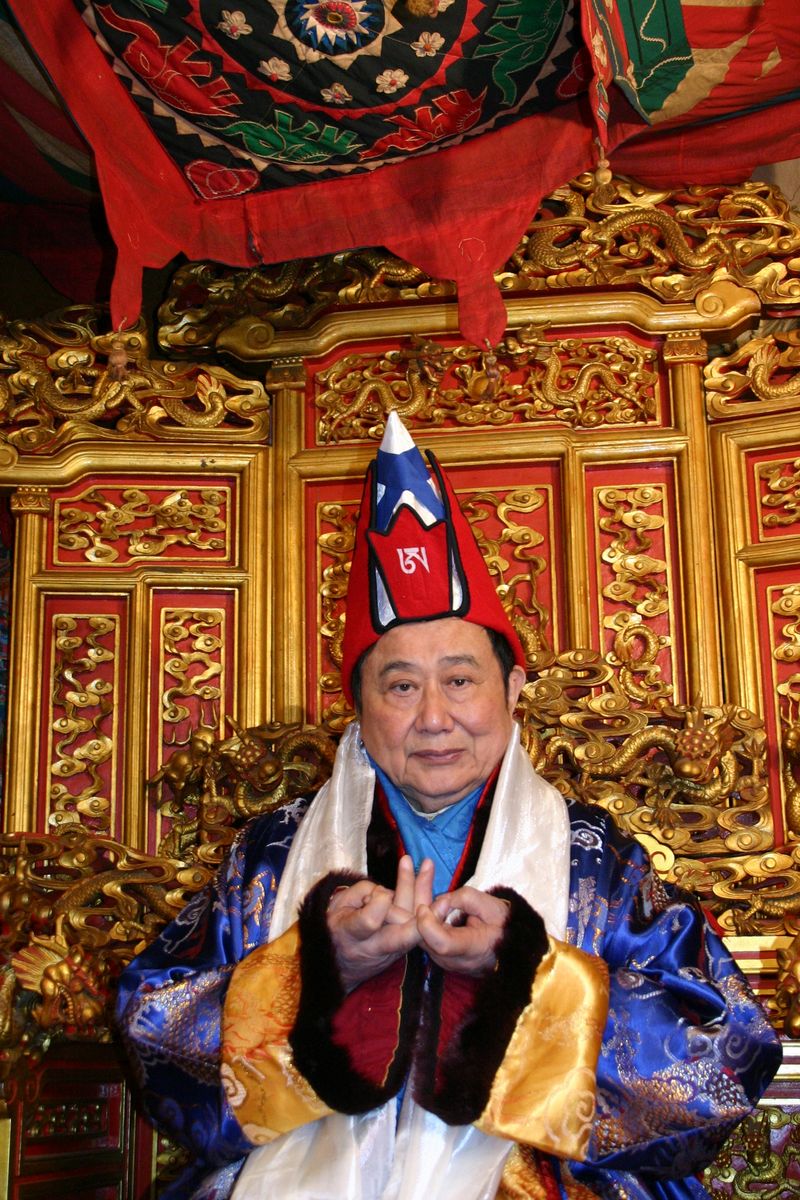 His Holiness Grandmaster Professor Thomas Lin-Yun is the founder and supreme leader of the contemporary Black Sect Tantric Buddhism at its fourth stage. His teachings are comprehensive, philosophical, and spiritual. It incorporates the essence of Confucianism, Taoism, Yin-Yang philosophy, Eclecticism, Exoteric Buddhism, Esoteric Buddhism, I-Ching, Theory of Ch'i, holistic healing, feng shui, and folkloric studies. Professor Lin-Yun is a native of Taichung, Taiwan. His parents, Mr. Lin, Tzu-chin and Mrs. Lin, Ah-chiao, were both descendents of the well-respected Lin Family in Taiwan. Mr. and Mrs. Lin both participated in the anti-Japanese invasion activities of the Taiwan Cultural Association, and because of this, they moved their family to Beijing. Therefore, Grandmaster Lin-Yun was born and raised in Beijing, and began studying Black Sect Tantric Buddhism with his first guru, Lama Da-De at Yong-He Palace when he was six years of age. At age seventeen Professor Lin-Yun left China and returned to Taiwan where he continued his studies under other gurus of Black Sect Tantric Buddhism, such as Master Hui, Chieh-fu and Master Cheng, Kuei-ying. He also studied with many other distinguished philosophers, artists, and Buddhist masters and scholars, such as Professor Cheng, Ti-hsuan. After years of study and meditation, Professor Lin-Yun has achieved profound spiritual insight and abilities, while helping numerous people solve their problems using "transcendental solutions." For more than three decades, Professor Lin-Yun has introduced his profound and insightful teachings, especially Feng Shui, to the West by lecturing at universities and institutions all over the world. His Black Sect Tantric Buddhist Feng Shui School has been practiced widely received wide acclaim and created a trend in America, Europe, and Asia. In 1997, Northern California Graduate University presented Professor Lin-Yun with an honorary doctorate degree in the study of humane psychology. This is to affirm Professor Lin-Yun's commitment to bridge Eastern and Western cultures, as well as the spiritual and mundane guidance Professor Lin has contributed and bestowed to mankind. In 1998, His Holiness Lungtok Tenpai Nyima Rinpoche, the supreme leader of the Bon religion, which is recognized by the Dalai Lama as one of the five Tantric traditions in Tibet, personally led four high lamas to the United States from India. Their purpose was to conduct enthronement ceremonies, one in Yun Lin Temple in Berkeley, California, and the other in Lin Yun Monastery in Long Island, New York, to officially present Professor Lin Yun the title of "His Holiness" of Black Sect Tantric Buddhism Fourth Stage. This is the first time in the history of Tibetan Bon religion to present such an honor to a Chinese. As a distinguished philosopher and foremost authority on feng shui, Professor Lin-Yun lectures extensively at the invitation of academic institutions and religious communities all over the world. His audience includes the Parapsychology Society of the United Nations, the Library of Congress, the American Institute of Architects, and leading academic institutions such as Harvard, Yale, Princeton, MIT, Stanford, UC Berkeley, UCLA, Cornell, Duke University, Johns Hopkins University, University of Hawaii, University of Minnesota, California Institute of Technology, University of Pennsylvania, Wellesley College, Brandeis University, New York Institute of Technology, Oxford University in England, University of Duisburg and University of Munich in Germany, Beijing University, Qinhua University, and Chinese Academy of Social Sciences in China, just to name a few. He has also been invited to conduct lectures in England, France, Spain, Germany, Norway, Switzerland, Italy, Hong Kong, Taiwan, China, Singapore, Thailand, Indonesia, Japan, India, Australia, Brazil, Mexico, West Africa, and South Africa, and so on. Professor Lin-Yun was Lecturer at the Yale-in-China Program of the Chinese University of Hong Kong; Visiting Professor at University of San Francisco (1980-81) and Stanford University (1981-82); and a Research Professor for three years at the Institute of Far Eastern Studies at Seton Hall University (1982-85). He has been interviewed by national and local television networks, including CBS, NBC, ABC, PBS, FOX, the BBC of England, and major television networks in Taiwan, Hong Kong and Southeast Asia. Interviews and articles on Professor Lin Yun and his teachings often appear in newspapers, journals, and magazines throughout the Americas, Europe and Asia. In 1986, Professor Lin-Yun founded the Yun Lin Temple in Berkeley, California. It is the first reformist Black Sect Tantric Buddhist temple at its fourth stage in the West. In 1993 the Cultural Center of the Yun Lin Temple was also set up in Berkeley. In 1994 Professor Lin-Yun established the second official temple - Lin Yun Monastery in Long Island, New York, which moved into its present eight-acre site in 1996. Over the years Professor Lin-Yun also set up many sanctuary shrines - Yun Shi Jing She - all over the world. In addition to promoting Buddhist teachings, Chinese philosophies and folkloric cultures, Professor Lin-Yun's temples and shrines also serve to provide blessings and guidance to meet the needs of disciples and people everywhere.

I am sadden to learn of His Holiness Lin Yun's passing. I met His Holiness in 2000 upon graduating from my Feng Shui class of 2000. It was an honor and a blessing to meet him. It was one of the most exciting days of my life to meet such a holy and humble person. I have pictures of him and I which I will treasure with fond memories of meeting him for the first time. Rest in peace.