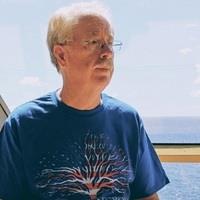 Gregory William Lynch passed away unexpectedly at the age of 74 following a short illness. Greg was born in Columbus, Ohio, and spent his childhood in Washington Court House, Ohio. After high school, he served in the United States Air Force at Wright-Patterson Air Force Base. Following his time in the Air Force, he pursued his interest in the outdoors by studying for a Bachelor’s Degree in Wildlife and Fisheries at the University of Idaho. Greg went on to attain a Master’s Degree in Wildlife Biology from Texas A&M University. He served his country as part of the U.S. Fish and Wildlife Service for 3 years and as part of the U.S. Forest Service for 28 years before retiring in 2008. Aside from serving his country, Greg enjoyed serving God and the community. He served as an active member and Lay Speaker at Kennesaw United Methodist Church until moving to Florida, where he became an active member and Lay Leader at Emmanuel Methodist Church. He was a kind and spiritual man, always ready to lend a hand, and always willing to give of his time and talents. His caring personality and unique sense of humor won him many friends, with whom he enjoyed golf, bowling, and travelling. Greg was preceded by his mother and father, Merrill and Helen Lynch of Washington Courthouse, Ohio, and his sister, Marilyn Lynch, of Culver City, California. He is survived by his wife, Pamela Hartley Lynch of Bradenton, Florida, and his son and daughter-in-law, Christopher and Jennifer Lynch, of Acworth, Georgia. Memorial Services will be 2:30 P.M. Sunday, September 27, 2020 at Emmanuel United Methodist Church . Brown & Sons Funeral Homes & Crematory 43rd Street Chapel is in charge of arrangements.  In lieu of flowers, please send donations to Emmanuel United Methodist Church, 5115 Cortez Rd W, Bradenton FL 34210-2810. Condolences may be made to www.brownandsonsfuneral.com.

Pam— I am so sorry about Greg. We’re praying for you, Chris and his wife. All the Friends in Faith Sunday School in Kennesaw is holding you in our prayers. We love you and miss you. Blessings and prayers

So very sorry to hear about Greg’s passing. Pam and Chris will be in my prayers. Greg was always one to joke about his golf game. We spent many a day laughing about his golf adventures.

So shocked and saddened to hear of Greg's passing. Our thoughts and prayers are with you.

Really enjoyed Greg's humor in church as the litergist. He was dedicated to the Lord and his church. So sorry he is gone. Prayers for Pam & Chris. Greg is resting in the Lord's prescence now. God bless him.

Greg was a wonderful friend to my husband and me! He always had a joke or meme to text to make us laugh. He had such a kind, servant's heart! He was someone we could count on to be there for us and so many others. Whatever he did, he gave 100%. Our loss is Heaven's gain! We look forward to seeing him again someday as we worship and serve at our Savior's feet. We will miss him here but know it's not really goodbye. "We'll see you later, friend!"

Never miss an update about Gregory. Sign up today.