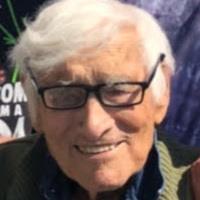 Portland - Harold E. Woodsum, Jr. passed away on January 5 at a local hospital after leading an interesting life.

Big Ed was from a family with deep roots in Maine. He was born in Portland on August 13, 1931 to Harold E. Woodsum and Ethel Maude (York) Woodsum. While at South Portland High, Ed earned nine varsity letters, three each in football, basketball and baseball. In 1948, Ed won all-state honors in football, was named to the All-American Secondary School Football team and played in the All-American Game in Corpus Christi, Texas. Ed captained South Portland’s 1949 Western Maine Class A championship basketball team.

Ed attended Yale University, where he played offensive end for the football team. He led the Ivy League in scoring in 1952 with 11 touchdowns and set Yale records for yards gained in a game, yards gained in a season, number of catches in a season and career touchdowns. During his senior year, Ed twice set the Yale record for the number of touchdown catches in a single game, a record that has yet to be beaten, and scored all four touchdowns in Yale’s 28-0 victory over Brown. What was remarkable about Ed’s success as a pass catcher was that he had very poor eyesight and did not wear corrective lenses while playing. He had to count, run to a designated spot on the field and hope that the ball would be there. Ed claimed his success on the football field was due entirely to the quarterbacks he played with, later telling the author Richard Moll, who included a chapter about Ed in his book, The Lure of the Law, “It’s a hell of a lot more difficult to throw it than to catch it.”

After college, Ed was drafted by the Chicago (now Arizona) Cardinals of the National Football League, but was unable to join the team due to military service. Following service in the Army, during which he was stationed at Fort Dix, New Jersey, Ed reported to the Cardinals’ training camp in 1955, but left before the start of the season to attend Yale Law School.

While at Yale Law School, Ed met Joan Patterson, a fellow law student from Honolulu and San Francisco, and they were married at Dwight Chapel on the Yale campus in October of 1957. Ed and Joan spent their honeymoon staying at a hunting camp deep in the Maine woods, a then novel experience for Joan. In 1958, after graduating from law school, Ed joined the law firm of White & Case in New York City, where he specialized in corporate work. Ed left New York in 1965 to return to Maine, where he became one of the founding partners of the law firm now known as Drummond Woodsum and MacMahon.

Although a successful lawyer in New York and Portland, Ed always wanted to be a fisherman, just like his uncles.

Ed, Joan and their family moved to Cape Elizabeth in 1965, to the same house Ed was living in at the time of his passing. Ed was elected to three terms on the Cape Elizabeth Town Council, where he was involved in saving from development the former military facility that would become Fort Williams Park, and, with two neighbors, bought property at Kettle Cove so that it could later be transferred to the State to be added to Crescent Beach State Park.

Ed and Joan enjoyed travelling together to far-flung places around the globe, although their favorite destination was Hawaii, where Joan had lived as a child before being sent to the mainland during World War II.

Ed was a trustee of the Portland Symphony Orchestra and served as Chair of its Board. He helped raise funds for the United Way of Greater Portland as a member of its Campaign Cabinet.

For many years, Ed served as a member of the Council of the Quebec-Labrador Foundation, an organization founded by the Rev. Robert Bryan, whom he had met at Yale.  QLF provides services to remote communities on the north shore of the Saint Lawrence River. The Rev. Bryan was one-half of the Maine story-telling duo of Bert and I, who dedicated one of their stories to Ed.

Ed served Yale in several capacities after graduating, and in 1979 was elected to the Yale Corporation, Yale’s governing body.  Ed served as Chair of the Corporation’s Investment Responsibility Committee, which was dealing with the sensitive issue of the University’s investment in entities doing business in South Africa, and in that capacity led a fact-finding mission to South Africa. He remained on the Yale Corporation until 1988, when he was named Yale’s Athletic Director, a position he held until 1994 and which allowed him to indulge his passions for Yale, athletics and supporting young people.

While in College, Ed spent a summer working on a boat that sailed to Labrador, an experience that led to a life-long love of sailing. Ed loved the Maine coast, and liked nothing better than being out on the water in a boat of any description. For many years, Ed and his family spent time in Corea, a small fishing village in Hancock County, where Ed would talk to local fisherman and enjoy the comings and goings in the harbor.

Ed was devoted to preserving Maine land and served on the board of the Maine Coast Heritage Trust for thirty years, many as its Chairman. In 2002, in honor of Ed’s long service, MCHT named a portion of land on Marshall Island in Hancock County the “Ed Woodsum Preserve.”

Ed had a wicked sense of humor, was a great storyteller, and a good friend to many.

Although a man of great modesty, Ed would sometimes say about himself, “Not bad for a kid from Willard Square.”

El Supremo maintained his beloved sense of humor to the very end. Aloha Dad - we will miss you.

At Ed’s request, there will be no service. The family asks that in lieu of flowers, a donation be made to:

Or to support the Joan and Ed Woodsum Endowed Scholarship at the University of New England:

Ed was an unfailingly supportive friend to me and to the University of New England. A gentleman of the old school, he hand wrote me a letter of encouragement every year until I retired from UNE. He was particularly happy we were starting football. Ed leaves us all better for the example of his life of service to his family, higher education and his community. I just loved him.

The accolades will pour in for Ed, reflecting the breadth and diversity of his life. I'll just add one more voice to that chorus. I am a lawyer in Ed's firm, and was mentored by him. If you read his wonderful obituary, you'll have a sense of the intimidation new associates would feel to be called to work with him. In person, he did everything he could to play down his resume to focus on you as an individual and guide you along. His lifetime achievements are legendary for those of us from...