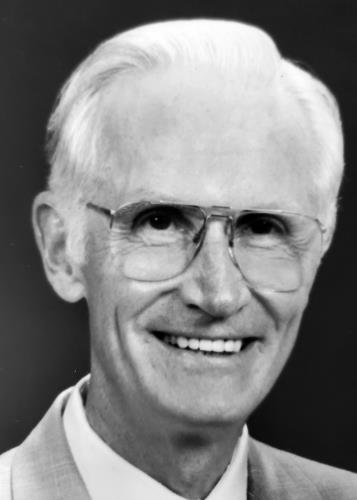 Not the right person? See All ›
LOCATION
Crown Point, Indiana

CROWN POINT, IN - James A. Forsythe, age 95, of Crown Point, passed peacefully on to his heavenly home on Wednesday, April 8, 2020.

Jim grew up during the depression, taking his first job at age 15 delivering milk from a horse-drawn cart. Jim volunteered for the Army at 17, achieved the rank of Army Sergeant in England during WWII, and served again in Korea. Jim's life-long patriotism was evident in his Abe Lincoln reenactments on President's Day, marching in uniform in Crown Point's July 4th parade, leading Crown Point's Memorial Day ceremony, and 60+ years in the VFW, among other things.

Jim met his future wife, Marjorie, while stationed at Camp Atterbury. They married in 1946, settled in Crown Point, and worked to get their lives on solid footing. Jim started at the local phone company and climbed the ranks over 35 years in what eventually became AT&T. Over this period, Jim and Marge raised a family of four, instilling in them the importance of faith, family, marriage, education, hard work, generosity, and laughter. Fond memories include summer vacations, golfing, motorcycle rides, tossing a Frisbee, and silly songs or corny jokes for every occasion.

Jim became involved in politics later in life, serving first on the city council and then as Mayor of Crown Point from 1984-1991. Favorite accomplishments include helping start Hub Pool, saving the Old Court House, establishing the Summit Street industrial park, and computerizing the city's finances. Jim was also active in numerous service organizations (Jaycees, Exchange Club, and Rotary, to name a few) and was recognized for his servant leadership with many awards over the years.

In his "spare" time, Jim loved music. He started playing guitar in 5th grade, led The Gold Tones at weddings/events for 30 years, and was still jamming at the CP Farmer's Market at age 92. Jim was very handy around the house, teaching himself (and his kids) building and maintenance skills as needs arose. Jim and Marge loved to travel, journeying to all 50 states. After retirement, Arizona was a favorite winter destination. In the final chapter of his life, Jim modeled marital love by being Marge's full-time caretaker as her health declined. Theirs was truly a 73-year love story.

Due to CDC guidelines and the health of our community, arrangements for Private Services with immediate family only, have been entrusted to GEISEN FUNERAL, CREMATION & RECEPTION CENTRE in Crown Point, IN. Jim will be laid to rest on Monday, April 13, 2020 at St. Mary's Cemetery in Crown Point.

To send "Hugs from Home", where your message of love and support will be attached to a balloon and placed in the chapel for the family, visit www.geisenfuneralhome.com/hugs-from-home/.

In lieu of flowers, memorial donations may be directed to St. Mary's Catholic Church in Crown Point or to the Crown Point Community Foundation.You may share a message or view Jim's video tribute at www.GeisenFuneralHome.com 219-663-2500.

Such a shock, yet because of his faith we know Jim is looking in the face of Jesus with "all the company of heaven". He's "home" where we will one day be also.

My deepest condolences to the Forsyth's family.
Paul, you will be in my thoughts and prayers.

Jim was not only a Crown Point leader, he was a regional leader. He was a value-full, valuable, wise & preeminent man, a pillar and one who commanded my Respect. He treated everyone with respect. I am 30 yrs his junior and he treated me as an equal which endeared me to him.

Thank you for your service to your country and your community. May eternal rest be granted unto you.

Jim was a great help to me when Indiana Bell transferred me into Lake County back in 1980. He was such a gracious person making me feel welcome. To Paul and the rest of the family your dad will be greatly missed by me and the people of Crown Point.

The mayor was such a gracious, classy man, with such a heart for Crown Point, for people in general, and for our country. Every so often, we are privileged to know of such people, and "the Mayor" and his wife were two such souls. Thank you, Lord, for this dear man, his precious wife, and their legacy.