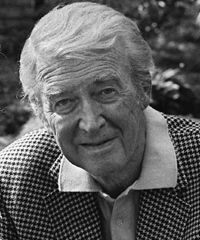 Another angel got his wings. James Stewart's image as an old-fashioned hero was not some Hollywood concoction. The lanky, slow-talking actor left behind not only an unrivaled body of work but also a legacy of dignity and generosity. From his courageous war service to his steadfast devotion to his wife, the "Mr. Smith Goes to Washington" star exemplified the values of decency and moral courage that he created on screen. "He is the last of the great leading men," said actor Robert Wagner, a longtime friend who was co-host of Stewart's charity road race. "He was a very kind, very generous person. Everybody who knew Jimmy is better off." Stewart died Wednesday at his Beverly Hills home from a blood clot in his lung. He was 89. Fighting illness and mourning the 1994 death of his wife, Gloria, Stewart had become something of a recluse in recent years. His image as a beloved symbol of American integrity, however, never dulled. "Jimmy Stewart had a wonderful life, and there was no one more dear or more fun than he was," Doris Day, his co-star in "The Man Who Knew Too Much," said in a statement. "America lost a national treasure today," President Clinton said, describing Stewart as "a great actor, a gentleman and a patriot." Stewart played the hero even when the cameras stopped rolling. From his noble film characters to his offscreen role as devoted husband, dutiful son and genuine war hero, the Academy Award-winning actor championed simple values, giving decency and courage a face _ and a slow, stammering voice. Not so much the suave matinee idol as the guy-next-door type, Stewart mostly played devoted, sometimes bashful heroes, slow to anger but possessed of extraordinary valor and endless perseverance. Decades after Stewart's films came out, they remain among the most beloved in the American movie canon. He played an idealistic young senator in 1939's "Mr. Smith Goes to Washington" and a suicidal businessman in 1946's "It's a Wonderful Life," his personal favorite. Stewart won a best actor Academy Award for 1940's "The Philadelphia Story" and was nominated four other times. In his more than 75 films, Stewart built a body of cinematic work with few equals: movies suffused with nobility and humanity. Stewart's other movie credits included "The Man Who Shot Liberty Valance," "Destry Rides Again" and "Harvey." Betty Hutton, who starred with Stewart in 1952's "The Greatest Show on Earth," said Stewart was "the most special actor I've ever worked with." "He was just a great human being," she said. "That same man that you see, that you talk to, that you love every day is the same man that you see on the screen." An aw-shucks sort of guy in real life, Stewart was more likely to credit his directors than himself for his screen performances. "I won't let it get me, but too much praise can turn a fellow's head if he doesn't watch his step," he once said. His wife often reinforced his humility. At a party one night, he started telling a story in his trademark faltering style. "Now, dear," she chided, "don't talk like Jimmy Stewart." Former President Ronald Reagan and wife, Nancy, Stewart's close friends who presented him with the Presidential Medal of Freedom in 1985, said in a statement that Stewart's modesty meant he "never really understood the greatness that others saw in him." Kim Novak, his "Vertigo" co-star, said Stewart was "one-of-a-kind." "Others would merely be copies. He was my friend, my role model. He taught me that it was possible to remain who you are and not be tainted by your environment," she said. Born James Maitland Stewart in Indiana, Pa., on May 20, 1908, Stewart's life reflected a small-town, religious upbringing and sense of responsibility: He was politically conservative, married only once, for 45 years, and served in World War II. Sent to Europe as a bomber squadron commander, he flew 20 combat missions and earned the Distinguished Flying Cross. In 1959, he was promoted to brigadier general in the Air Force Reserve by President Dwight D. Eisenhower. Stewart often returned to help the family hardware store in Pennsylvania, where his Oscar was displayed in the window for 20 years. "It's a Wonderful Life" cast Stewart as George Bailey, a good and ambitious man who grows despondent after it seems life is passing him by. Bailey learns life's important lessons from his guardian angel Clarence Odbody: "Each man's life touches so many other lives, and when he isn't around he leaves an awful hole, doesn't he? ... You see, George, you really had a wonderful life." One of Stewart's two stepsons, Ron McLean, died while fighting in Vietnam in 1969. Survivors include stepson Michael McLean and daughters Judy Merrill and Kelly Harcourt.

one of the finest this world will ever know

Mr. Stewart: I just loved all of your films... from "The Man Who Knew Too Much"; "Vertigo"; "Rope"; "Rear Window" and "It's a Wonderful Life". My favorite movie you starred in is and always will be "Mr. Hobbs Takes a Vacation". You were always authentic and genuine and I could tell you were as sincere off the screen as on. You touched so many lives and just today, Feb. 18, 2020 I found out that you died the same year as my only...

to james stewart in joy your movie i like the man who shot liberty valence George turner of Rochester nh.