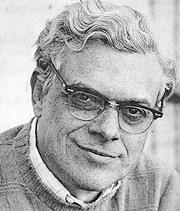 YAFFE--James, a college professor and writer whose fiction and non-fiction chronicled the lives of American Jews in the 20th century, died June 4 at his residence in Denver, CO. He was 90. Yaffe was the author of 11 novels, two short-story collections and two works of non-fiction. His play "The...

I love his fiction and use his story "The Refugees" in my course on ethical themes in the contemporary American short story. Most of my students love it, too.

So very sorry to hear about Jim's death. As his cousin, I have many wonderful childhood memories.
Love to the family.
Bob Smith
[email protected]

I took a two-block course with Professor Yaffe in the late 1980s. He was a great inspiration to me, and although I haven't seen him for years, I will miss him very much.

Although I never met him, James Yaffe has been a presence in my life since I was 16 and became the second youngest person to publish in Ellery Queen's Mystery Magazine. He, at 15, was and remains the youngest. His work brought joy to many thousands of readers, including me, and will live on far into the future. My condolences to his family and my thanks to him.

Sorry for the loss of your dear love one. Please take comfort in the fact that God will make you firm and He will make you strong. He will firmly ground you at this time of sorrow.
1Peter 5:10

So sorry to hear about Jimmy's death. My love to the whole family, Elaine, the kids and especially Oona. I was in Utah when I heard....or I would have been at the funeral.

Our thoughts and prayers are with the Yaffe family.

I am so sorry to hear of your husband's death. I never met him but his reputation was stellar. PLease know that I am thinking of you and your family.

Never miss an update about JAMES. Sign up today.