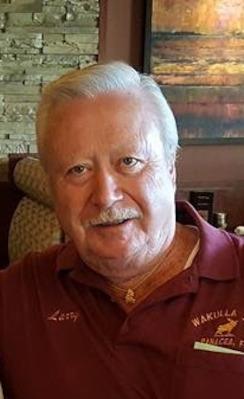 Not the right person? See All ›
AGE
79
LOCATION
Tallahassee, Florida

Tallahassee - John L. "Larry" Carter entered into rest Saturday, October 17, 2020. Larry was born March 26, 1941, and lived all of his life in Tallahassee. He was preceded in death by his father and mother, Charles and Hilda Carter. Larry was a graduate of Georgia Military Academy, attended Chipola Junior College and served in the U.S. Army Reserve.

Larry's entire working career was devoted to the transit industry, beginning at a very young age working for his father, "Charlie," at Cities Transit. He began by cleaning and washing buses to overhauling engine parts and eventually becoming a driver. As his father had met his mother while driving a bus, Larry was fortunate to fall in love with his future wife, Margaret Lambert, while doing the same. As Cities Transit evolved into the city of Tallahassee's Taltran, Larry served as its Director. His total service to the transit industry spanned over forty years. Larry was honored to be elected President of the Florida Transit Association, and in 1997, received a special commendation as the longest tenured Public Transit Director in the United States by the American Public Transportation Association.

Larry's leisure time was spent between Tallahassee and his beloved Alligator Point, boating on the "I. B. Strokin," and traveling with Margaret in their motorhome. He loved people and pets! Larry was an active Seminole Booster and should have received an A+ in motorhome tailgating. As a member of the Wakulla Moose Lodge, he made many, many friends. Larry cherished his time with them. His love for friends and party times extended for many years, especially during the Christmas season, as he and Margaret opened their home for celebration. He was a longtime member of the Thomasville Road Baptist Church and a charter member of Mission by the Sea at Alligator Point.

Funeral services will by held 11:00 a.m. Wednesday, October 21, 2020 at Bevis Funeral Home Chapel. Burial will follow at Roselawn Cemetery. Mask are required. The service will be available to view live online at https://www.bevisfh.com. To watch, click on the word Obituaries at the top of the homepage, then click on the name of your loved one, and then the green Photos and Videos tab. Staff members will be available to answer questions or help with technical issues at (850) 385-2193.

In lieu of flowers, it would be appreciated for gifts, in Larry's name, be made to:

Susie Mozolic of Bevis Funeral Home is assisting the family with their arrangements. (www.bevisfh.com 850-385-2193)

Our family is so sorry for your loss. You all are remembered in our prayers daily. Rodney Kittrell, Bruce Kittrell and family, and David & Katherine Anderson and family.

I have worked under the direction of Mr.Carter as a Tal Tran employee. My most deepest heartfelt condolences to your family!

Sheri, Thinking of you and your family during this difficult time. I know that your dad was a kind and fun loving
man and he will be missed. Please do not hesitate to call if I can be of any help! Much Love

Larry was a kind and generous man. My condolences to Margaret and the family.