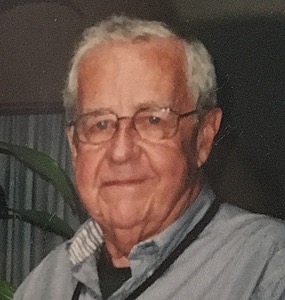 Not the right person? See All ›
This has not been verified by Legacy.com or our partners.
BORN
May 29, 1931
DIED
August 28, 2018
AGE
87
LOCATION
Branford, Connecticut
CHARITY
American Cancer Society
Make a donation

John Francis DeLay, age 87, of East Haven, CT and formerly Guilford, CT passed away on August 28, 2018 in the presence of family at Connecticut Hospice in Branford, CT. John was born and raised in Cedar Rapids, IA. John was a proud graduate of Loras College (Dubuque, IA) where he earned a Bachelors Degree in Business in 1953. This was also where he met his wife, Charlotte. He often told the story of the first time he saw Charlotte and exclaimed to a friend, Im going to marry her one day. John and Charlotte recently celebrated their 64th wedding anniversary on August 21st. Immediately after college, John started a career with the Equitable Life Insurance Company that would span over 30 years and three states; Cincinnati, OH, New York, NY and ultimately Milford, CT, where he led the Milford branch and settled his family in Sachems Head in Guilford, CT. After retirement, John, a gregarious salesman, took many part-time jobs including selling magazine subscriptions and windows. John was a creative and talented woodworker who spent countless hours restoring furniture, frames, chests and any other pieces he found. He always saw the potential of a piece and gave it new life. His handiwork and creativity rubbed off on his children and grandchildren. John served as President of the ATTIC Tool Club for many years and enjoyed writing the quarterly newsletter with his grandchildren as well as organizing events for the group. He was also a Member of the MidWest Tool Collectors Society and often traveled to tool meets. His love of antique tools led to a feature in the New Haven Register about his extensive Sargent Tool Collection. He looked forward to his monthly lunches with fellow retirees from the Equitable and loved to tell stories about his life. He was a jokester who always tried to find the humor in any situation, bringing a smile to the face of anyone he met. John was an avid historian and loved to read about Generals, Presidents, and Wars. John was very generous and supported many local and national charities.

Family and friends are invited to attend a Memorial Mass on Saturday, September 8 at 10:00 a.m. at St. George Catholic Church, 33 Whitfield St, Guilford, CT, 06437. In lieu of flowers, donations may be made in Johns name to the American Cancer Society or Connecticut Hospice of Branford, CT.

So sorry for your loss Morgan, Jeff & family.

He was one of my favorite bosses ,one great guy!