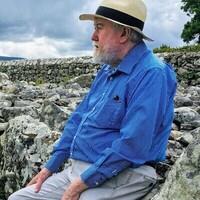 On Friday, October 30th, 2020 John Gleeson, loving husband, father and grandfather passed away at the age of 76 in Milwaukee, Wisconsin. He was born in Dublin, Ireland to John and Kathleen (nee Bolton) Gleeson on 4 September 1944. Following a distinguished and eventful career with the Guinness Brewing Corporation, John moved to Milwaukee from his native Dublin in 1980. He earned a M.A. degree in Applied History and a M.F.A. in Film from the UW-Milwaukee. Already well known in Dublin as a speaker, raconteur and actor he put these traits to good use in his new home town of Milwaukee. He became a founding member of the Milwaukee Irish Arts, the Irish Cultural Heritage Centre and was director Emeritus of the Centre for Celtic Studies at the University of Wisconsin-Milwaukee.  As a cultural advisor to Milwaukee Irish Fest, his vision helped the festival grow to become the biggest Irish cultural gathering in the world.

His love of teaching shone at UWM where he taught courses in Irish language, culture, film, folk belief and religious practice. John also designed and coordinated study abroad programs in Ireland; the Colmcille Semester Abroad and the Oideas Gael Summer Program in Donegal. For over 20 years he also worked with Marquette University High School on a 'Irish Adventure' program that showcased Ireland to recently graduated students.

John was known for his quick wit, endless supply of anecdotes, his generous spirit and was regular contributor to print and broadcast media on Irish issues. John was voted 1993 “Irishman of the Year,” 2006 “Wisconsin Celtic Person of the Year” and is numbered among Irish America Magazine’s “Top 100” on a number of occasions.

John was preceded in death by his father, John, his mother, Kathleen and his brother, Dan. He is survived by his best friend and wife Meg,(nee Castino) his two children Flannan (Louise Kelly ) and Hannah (Jameson Picado) and was 'Daideo' to Peadar, Nora and Trinni. Survived by his brothers Francis and Oliver, sisters Mary, Rita, Catherine and Anne several brother and sister in-laws, nieces, nephews and cousins.

A mass of Christian burial will be held at 11 a.m. on Friday November 6th at Cathedral of St. John’s the Evangelist. 812 North Jackson Street Milwaukee, WI 53202.

Due to COVID restrictions, attendance is very limited.

Donations in his honor may be sent to The Center for Celtic Studies at UW-Milwaukee.

Although not a traditional student of Johns, I learned much. I was referred to John as one who was willing to share information on Irish language and folklore. He agreed to met at a local coffee shop were we sat for 2 hours. He had such wealth of information and endless generosity for sharing it. He presented knowledge in a most captivating way, a truth teller of stories. I recall as we sat he never once took a sip of his now cold coffee, revealing his depth passion for knowledge and...

Having been consumed with life, the universe, and everything, I am ashamed to say I just found out about John's passing. The tour group we joined in October of 1996 to Ireland under John's expert tutalige will never be forgotten (and I'm sure he never forgot I was always the last one back on the bus!). It was John himself who named our Jack Russell Terrier Guinness, and she certainly lived up to her name in every way. Fair winds and following seas, John. I know all the Irish angels and saints...

Sympathies to Meg, Flannan, and Hannah. Your father will be remembered fondly. His stories, warmth, and humor will be live on. He believed in dreams and encouraged people to follow theirs. RIP John.

My sympathy to Meg, Flannan, and Hannah and his extended family in Ireland and the United States on the death of John. I learned of his death with a heavy heart. I realise how his death impacted on his immediate and extended family and indeed to all who knew him for he leaves a great void in our lives.

It was always a great and exciting experience to be with John with his vivacity and enthusiasm for life. He explored so many cultural areas and particularly Irish culture and...

John Vianney Gleeson rest in peace knowing you have made your mark in this world - leaving behind a rich legacy - that will live on in the hearts and minds of all you have blessed with your talents, knowledge, generosity, kindness and love. God bless you, your family, friends and all who are grieving your loss. Amen.

Cathedral Of St. John’s The Evangelist