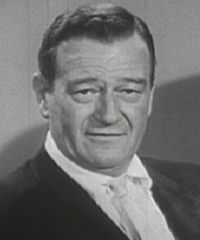 On the 100th anniversary of John Wayne's birth, the Duke still swaggers through the American psyche as not just an actor, but a patriot -- his centennial spawning fond remembrance, and perhaps a few small protests on the side. Wayne's legacy is unique because of the dual perspectives that pervade his memory. Pulitzer Prize-winning author and historian Garry Wills, who wrote "John Wayne's America" in 1997, described Wayne as "the most popular movie star ever, but also the most polarizing." It could be argued that no other film actor has ever come to symbolize so many things: rugged masculinity, the frontier, even America itself. The Duke has remained, in the truest sense, an icon. For many, an entire way of life is epitomized in the tired, unblinking eyes that peered knowingly from his cocksure pose ("walks around like a big cat," said Howard Hawks). His voice, too, seems etched in the collective memory: With a simple "pilgrim," a whole lost world is summoned. Wayne, born Marion Robert Morrison, would have turned 100 on Saturday. He died at 72 of stomach cancer in June 1979 after a career that spanned more than 170 films. He didn't win an Academy Award until 1970 for his performance in "True Grit." (He was nominated twice earlier -- for best actor in 1949's "Sands of Iwo Jima" and best picture for 1960's "The Alamo," which he directed and produced.) To this day, he still ranks atop polls rating the most adored actors; a Harris Poll conducted just this year rated him as the third-most popular movie star behind Denzel Washington and Tom Hanks. Nostalgia for strong, silent heroes like those Wayne portrayed can regularly be spotted in places like HBO's "The Sopranos." Of course, even Tony Soprano sees a shrink, and Wayne's rugged masculinity is now often viewed as the symbol of bygone era; feelings are now meant to be openly expressed and analyzed. Those who keep their emotions locked up have even been referred to as suffering from the "John Wayne syndrome." He seldom deviated from heroic roles, often set in the West or on the battlefield. Among his most beloved and acclaimed films are "Stagecoach" (1939), "Sands of Iwo Jima" (1949), "The Searchers" (1956) and "The Man Who Shot Liberty Valance" (1962). His range was limited, but he mined a narrow path of the reluctant but obligated hero -- a consistent approach that furthered his iconic stature. He knew it, too. "When I started, I knew I was no actor, and I went to work on this Wayne thing," he once said. "I figured I needed a gimmick, so I dreamed up the drawl, the squint and a way of moving meant to suggest that I wasn't looking for trouble but would just as soon throw a bottle at your head as not. I practiced in front of a mirror." It's a notably different -- and perhaps dated -- tactic in a profession that values, above all, malleability. If you want to be an actor, study Brando. But if you want to be a movie star, study Wayne. "He never tricked the audience with the characters he played," says Gretchen Wayne, who heads her late husband Michael Wayne's film company, Batjac Production, which was formed in 1954 by her legendary father-in-law. "His films started in the late '20s, early '30s, so there's three generations of people who have grown up with him." She will host an evening presented by the Academy of Motion Picture Arts and Sciences in Los Angeles on Thursday, where a new restoration of "The High and the Mighty" (1954) will be shown. (Wayne was married three times and had seven children.) Turner Classic Movies has been paying tribute throughout the week by airing a 35-film festival of his movies. His birthplace, Winterset, Iowa, will hold a groundbreaking ceremony Saturday for a new John Wayne museum. "Hondo" (1953), recently restored in digital 3-D, will screen at the Cannes Film Festival. Hollywood studios are also rolling out a small army of DVD releases, including collector's sets from Lionsgate, Universal, Warner Home Video and Paramount. This is all evidences an enduring love for Wayne that may surpass even his esteemed contemporaries: Humphrey Bogart, Clark Gable, Cary Grant and Katharine Hepburn, whose centennial was earlier this month. Unlike some of the stars of his day, Wayne never served in World War II, ironic since Gen. Douglas MacArthur said he "represented the American serviceman better than the American serviceman himself." He was awarded a Congressional Gold Medal in 1979 shortly before his death. Jim Olson, a Sam Houston State University history professor who co-wrote the 1995 biography "John Wayne: American," believes Wayne's guilt over not serving in the war propelled him to compensate by being a fervent anti-communist and symbol of American ideals. "Wayne was a confused young man," says Olson. "He sort of grew up searching for the meaning of life and I think he found it in the values he ended up portraying on screen. His screen image and his individual persona kind of kept ricocheting off each other over time until the image on screen became his alter ego." Especially in his later years, Wayne came to symbolize political conservatism and a dedication to country. His stand against communism during the Cold War was so influential that Soviet dictator Joseph Stalin plotted to assassinate him, according to Michael Munn's 2005 biography "John Wayne: The Man Behind the Myth." Wayne famously said, "I always thought I was a liberal. I came up terribly surprised one time when I found out that I was a right-wing conservative extremist."

John Wayne is my hero and idol and has been since I was at least 12 years old. He has been a positive role model for millions because of his consistent values portrayed both on and off screen.

♥god through away the mold when he made Michael Marion Morrison, John Wayne, I grew up with him, and my daughters and made sure my grandchildren know who is , and this the year 2021♥

I Saw "The Cowboys" in the theater as a twelve year old boy. Never had that kind of an experience again in my lifetime. Thanks for the memories. We miss you, God Bless.

Hey Uncle J, I left some flowers in 79 80 but I was not sure that you would use them. So I left for bits around hope that it helps. I hope that you meet me on the other side but these are things beyond us. Hope you got to Tommy Miss you

he was a good man. inspired lots of young cowboys

Duke was a great American and Actor.I was privileged 2 be close 2 him during his movie, Green Beret.RIP John Wayne,there will never be another like you.