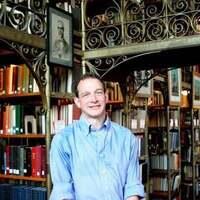 Lance J. Heidig of Ithaca, NY, died unexpectedly at home on Tuesday morning, April 6, 2021. The cause was cardiac arrest. Born on August 18, 1956, Lance was the son of Ronald R. Heidig (1933-2013) and Susan (Cramer) Heidig. Lance was born and grew up in Waverly, NY, the oldest of three siblings, with his sisters Pam and Doris.

He was a proud graduate of Waverly High School’s class of 1974 where he was the consummate Renaissance man. He excelled at his studies and, although he was president of the Science Club, he especially loved literature, poetry, music, and art. He was also an athlete—an accomplished member of Waverly’s wrestling, track and cross-country teams. Friends describe him as gregarious, yet thoughtful towards others, radiating with curiosity. He maintained many close friendships from his Waverly days and never wanted to miss a high school reunion. Loved by his classmates and teachers alike, he won citations and scholarships that helped him on his way to college at Oregon State University, including the Floyd J. Beers Scholarship of the Waverly Rotary Club.

Lance was an English major at Oregon State. He gloried in his college classes and experiences, joining the crew team in his freshman year and making many more friends. He was especially inspired by his art professor, sculptor Mark Sponenburgh (1918-2012), with whom he maintained a lifelong friendship.

As an enthusiastic traveler, outdoorsman and hiker, Lance was just as passionate about the natural world as he was about history and literature. He was at home in the forests and mountains, whether it be on the Appalachian Trail, at his father’s cabin in upstate NY, or in the Cascades, the Tetons, or the Rockies. In the summer of 1977, Lance’s life was transformed by the first of what would be seven summers spent in Rocky Mountain National Park. He took jobs in the Trail Ridge Store and Grand Lake Lodge, which enabled him to delight in the outdoor life he loved. Each summer he made new friends while reveling in rafting trips, concerts at Red Rocks Amphitheatre, and finding new mountains to explomade.re. This experience was so meaningful to him that he came back again and again, decade after decade, visiting and hiking with the great friends he had made.

Following his love of literature, Lance entered the University of Vermont to pursue a graduate degree in English. Time spent in a study program at Oxford University during the summer of 1981 was especially memorable, and he loved to tell stories about his hikes through England’s Lake District. By 1982, however, Lance had decided that his true path was academic librarianship. He received his MLS degree in 1984 from Columbia University’s School of Library Service and was soon hired by Cornell University, starting his first job in Cornell’s Uris Library on November 26, 1984. He was thrilled that his first full-time job as a professional librarian brought him to Cornell—located less than 40 miles away from his home town of Waverly, NY.

While Lance had many reference and teaching roles over the years in Cornell’s Uris and Olin Libraries, his appointment to Cornell’s Rare and Manuscript Division in 2010 allowed him to fully utilize his passions for literature, history, art, and storytelling. Although he loved books and research, he loved teaching and helping people even more. His joy in sharing the Library’s rare books and archives, such as E.B. White’s manuscript of Charlotte’s Web, or Cornell’s copy of the Gettysburg Address in Lincoln’s handwriting, could light up a room. He reached thousands of students in his 37 years in Cornell’s Library.

Lance met the love of his life, fellow Cornell librarian Katherine Reagan, in 1996. They built a life in Ithaca and shared 25 years together, enriched by close family and friends and a wide network of colleagues in the rare book and archival worlds. They also enjoyed many travels, especially to Katherine’s hometown outside of San Francisco, CA, and Lance’s favorite cities of Portland, OR, Seattle, WA, and Denver, CO. Lance’s relationship with literature was not passive. He used his readings to spur his travels and his travels to inform his reading and understanding of the world, and integrated those experiences into the classroom.

Lance was first and foremost a loving partner, brother, son, uncle, and friend. A dedicated writer of postcards, letters, emails and texts, he poured energy into his relationships. In the wake of Lance’s death, hundreds wrote to express sorrow and share treasured memories. Featured often in their remarks are mentions of Lance’s uplifting spirit, his enthusiasm for connecting with people, and his readiness to lend a hand. Several have said he was the most genuine and decent person they ever met. He was kind, cheerful, and always ready to talk, or as one friend described him: “exuberant, ebullient, and boiling with cheer.” His impact was wide and his loss is deeply felt.

Lance is survived by his partner, Katherine Reagan, of Ithaca, NY; his mother, Susan Heidig, of Waverly, NY; his sister Pam Leonard (Tim), niece Hilary, and nephews John and Thomas Leonard of Seattle, WA; in-laws Susan Mott of Walnut Creek, CA, and Ron Reagan of Cornelius, OR; and cousins Keith, David, Steven Burlingame, Shelly Harrison, Jan, Chris, Todd Hunsinger, Heidi Johnson, and Jeff, Mike, Stacy, and Eric Heidig. His father, Ronald Heidig, and sister, Doris Heidig, predeceased him. While there will be no formal funeral services, the family plans a celebration of Lance’s life this summer. Lance will eventually be interred at Glenwood Cemetery in Waverly, NY. In lieu of flowers, donations can be made to the Finger Lakes Land Trust https://www.fllt.org/

Sorry this is so late! Our Home internet and entertainment service change over was a full time endeavor for a month. Lance was such a friendly and interesting person. Lance had this obvious but understated super intellect but was somehow still extremely down to earth. (In his honor I even spell checked endeavor and privilege and sure enough I misspelled both for the first draft of this letter. Without a doubt if you had Lance around spell check would probably not be necessary). I had the...

My sincere condolences to Katherine and all who loved Lance. I met him in 2017 when I visited Cornell as part of my work on a collection held in the RMC Archives. His cheerful smiling face and enthusiasm for sharing knowledge about the library collections made a big impression on me. He was so excited to show first editions of Harry Potter and 'Charlotte's Web' and especially to show an Irish person the famous letter from Joyce to Nora Barnacle! In turn, I was thrilled to see the real thing...

I was so saddened to learn of Lance’s death today. My husband and I both worked at Uris library in the late 80s and early 90s and always looked forward to catching up with Lance at the Reunions. He was truly a wonderful person and will be missed.

I've known Lance since our days at the University of Vermont. We met in a James Joyce class (I inherited his apartment after he left Burlington), and exchanged poetry, books and music frequently over 40 years of friendship. Lance was always optimistic, caring, a walking encyclopedia—loquacious but a generous listener and friend. The last time I saw him in NYC, he let me talk him out of a Lincoln exhibition he wanted to see in favor of an Italian masters show I wanted to see. Unbeknownst to...

Lance was the consummate teacher and scholar and will be dearly missed. The effort he put in over several years to give my class a presentation on the history of science was astounding. He was not only a librarian but a talented raconteur. He brought the books, objects and manuscripts that he displayed to life for us with his encyclopedic knowledge and theatrical style. While I viewed the same presentation that he gave year after year, it was always exciting to see the students immersed...

Lance was a valued friend and colleague for 35 years. We started as librarians at Cornell just three months apart, both of us newly out of library school. Although cut short at an early age, his was a life well-lived. I will always cherish our friendship. My deepest condolences go out to Katherine and Lance's family and friends.

I am so sorry to hear this. Lance was a wonderful person. He lovingly, knowledgeably, and passionately shared the collections with my students every semester. He opened the world to them with the physical items and changed my world, my student's world's and my family's worlds. Dear Katherine, my heart is with you.

The springtime feels just a little quieter, a bit duller, and a chillier with the presence that was Lance Heidig now missing from our lives. His enthusiasm for life and his thoughtful observations will stay with me in my memories of my years in Ithaca. Having come to the Cornell University Library just a few years after Lance arrived, we had occassions to work together and play together (developing joint library instruction classes AND stomping grapes to make homemade wine in a friend's...

Never miss an update about Lance. Sign up today.