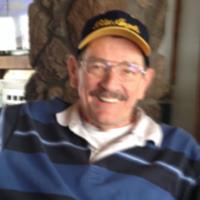 went to be with his Lord and Savior on June 29, 2020. Larry passed away at Grace Healthcare of Three Rivers.

He was born in Goshen, IN on February 21, 1945, and attended Constantine High School. On July 4, 1964 he married Jeanie Swartzentruber in Scott, IN.

Larry was a miracle rare cancer survivor that resulted in the amputation of one leg above the knee at the age of 19.  Even with his disability, he was able to work at many factories in the area with his last job being at Owens-Illinois in Constantine. He stopped working due to additional health issues that continued to mount over his remaining years.

Larry loved his wife and family. He enjoyed time with friends and staff at the local coffee shop, watching his daughters raise their families and especially watching his grandkids play sports.  He was also an avid Lions, Tigers and Pistons fan.

He was preceded in death by his father and mother, Delbert and Lou Vena (Collinsworth) Rink of Constantine, sister Linda (Rink) Swinehart of White Pigeon, and brother-in-law Fred Neubert of White Pigeon.

The family would like to extend a special thanks to the staff at Beacon Medical Group, Grace Healthcare, and Kindred Hospice. Online messages may be left for the family at www.eleyfuneralhomes.com.

Larry will be missed by Jo and I as we had some good times traveling & etc.

Jeanie I am so sorry for your loss, my prayers for peace & comfort to you and your family.

May God bless Larry and his wonderful family at this difficult time. Larry was always so kind and caring with my mother, Rose Vail. His courage and positive attitude have always been an inspiration to me.

Tina, Corinna and Mrs. Rink please know that you're in my thoughts and prayers. Mr. Rink was always so kind and I'll always remember his great smile. Praying for all who know and love him.

Sorry to hear this news. We had a lot of great memories together. Will miss you my friend.

I knew Larry growing up in Constantine. He is also the father and grandfather to 3 people that I hold dear, Tina, Dalton, and Dylan Hochstetler. I mourn his passing, but realize that he was given this long life after his struggle with cancer at such a young age. My condolences to you all.

Woody and Phyllis, I am so sorry to hear of the loss of your brother. Prayers for your family.