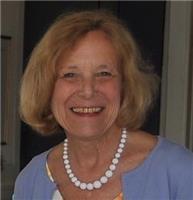 Lois Marie Herrmann, beloved daughter of Helen and Gustav Herrmann of Long Island New York, died on January 14, 2020, at Georgetown University Hospital, with loving friends at her bedside. A long-time resident of Washington, DC, Lois was 74 years old when overtaken by cancer after a battle in which she radiated grace and courage throughout. Her sudden passing has struck the hearts of her large family of devoted friends-here in Washington, across the United States, and overseas-with profound grief.

Lois was born in New York City on January 26, 1945, and grew up near the water on the North Shore of Long Island where she developed her life-long love of swimming. Her happiest memories were of summer swims in the ocean, swimming holes, and pools. Lois went on to earn her Bachelor's degree at Cornell University and her Master's at Stanford University.

Lois began her career at the Foreign Student Service Council in Washington, DC, and went on to become a highly accomplished member of the US Department of State, serving first in the Foreign Service and later in the Civil Service. She began her government career in the United States Information Agency (1976-1999) and concluded her fulltime State Department service in the Bureau of Public Affairs (1999-2014). She loved her overseas postings in Venezuela, Serbia, Bosnia and Croatia.
Writing and editing were key skills Lois put to great effect, drafting speeches, public testimony, and op-ed articles for senior State Department officials. She also played a leading role in press operations for several Presidential summits and major international conferences, including the G20 Summit in Pittsburgh (2009), the President's Nuclear Security Summit in Washington (2010), and the G8 Summit in Camp David (2012). She was proud to have served on State Department-wide Task Forces on world political and humanitarian crises including South Sudan, Ukraine and the response to the Asian tsunami (2004). She also published travel articles in the Christian Science Monitor and The Washington Star.

Lois served as a member of the boards of the Public Diplomacy Association of America (PDAA); the Stanford University Alumni Association; and the Theodore H. Barth Foundation, Inc., a philanthropic foundation supporting community health and welfare and the arts.

After her retirement, she volunteered at the Smithsonian with the Steinway Diary Project before returning to work part-time at the State Department, and she enjoyed personal travel through much of the world.

Lois considered her life's most important endeavor to have looked after her mother during her mother's last 12 years. The devotion she gave to her mother was easily recognizable in the love she showed her friends, her close bonds with animals of every species-but especially cats-and the kindness, wisdom, and loyalty she gave to all. Her spirit had a beauty and tenderness that will forever touch the hearts of all those who will miss her so greatly.

Donations in Lois's memory may be made to St. Columba's Episcopal Church.

Lois was my neighbor from 1986-1996. We played a little tennis and entertained each other over the years. She was always gracious and interesting. Later I learned that she was a volunteer at THIS for Diplomats serving as a member of the the Washington DC Cultural Exchange and Embassy Liaison to the Bahamas.
She was too young to go.

Lois was a real charmer. The combination of her own friendly personality and her Foreign Service skills meant she could talk to a doorknob---and not just with nice to meet you clichés, but with thoughtful observations on the issues of the day.

She was fully engaged in DC: she knew about and attended all the cultural and political events around town. Between opening night of the Oresteia at the Shakespeare Theater, or an interesting speaker at the 6th and I Synagogue, her...

Lois Herrmann has been a long-time supporter of Jubilee Jobs, helping unemployed but eager to work persons find marketplace jobs in Washington, DC. As a Board member of the Barth Foundation, she facilitated their support for Jubilee Jobs for many years. She also came regularly to our annual Benefit dinner.

Last year she came and visited with DeSean Lawson, a new staff person and young man not accustomed to large and rather formal dinners. He had been told he needed to talk to at...

Lois was an inspiration to living life with grace and compassion. I miss her friendship and positive outlook.

I was a member of Lois's book club in DC for many years. I no longer live in the DC area, and am sorry I will miss her memorial service. She will be greatly missed.
Linda Bergman
St. Louis MO

I knew Lois from the Beauvoir pool; you could say we were summer buddies. Loved to talk to her about her book club, travel and just what we were both up to. We had many laughs. I'm so sorry that I didn't know she was ill. A lovely person who will be missed by many.

Lois was such a wonderful, memorable person. I met Lois through work about 25 years ago and was shocked to learn today of her death. She was always so cheerful, so engaging, so rational and so bright, a loyal and dedicated daughter and friend. We met again in Istanbul in the first year of this century and did a Bosphorus cruise on the Hiawatha one September afternoon with Consulate General colleagues. I remember once Lois told me the story of how she happened to join the Foreign...

Angela & I were privileged to meet Lois with her friends Cynthia and Taffy on the Rocky Mountaineer in 2018 and were immediately struck by her humility and depth of knowledge about people and international relations.
It was a great pleasure to sit and chat about so many things, us being in Canada for the first time and having visited the USA only once previously and that for a few days in San Francisco in 2009.
We are sure that Lois will be sorely missed by all...

I just wrote "Happy Birthday" to Lois on her Facebook page - then read "RIP" - shocked!
I met Lois about 40 years ago. She was caring, intelligent, humble, loved travel and loved her job at the State Department where she contributed so much. She was so humble - in everything - and gracious with much energy and curiosity. I last saw Lois at the annual Unitarian Fair in December were she was volunteering.

Never miss an update about Lois. Sign up today.

See All District of Columbia Newspapers