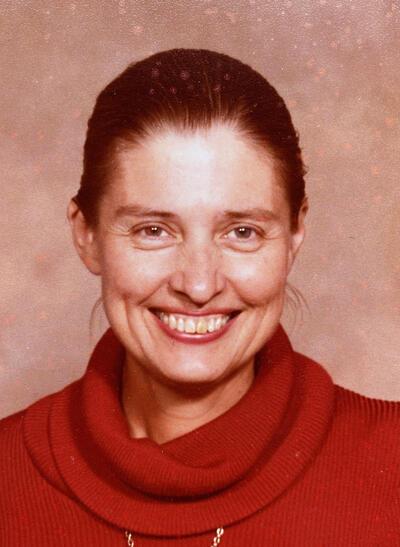 A memorial service will be held at a later time, with details still to be arranged.

Mary Lou Hull was born October 31, 1934 in Moline, Ill., the daughter of Rubert Hull and Myrtle (Flodman) Hull. She was named after her grandmothers – Mary Hull and Louise Flodman – later writing in a grade-school autobiography “I acquired my grandmothers’ names. I hope I can acquire some of their kindness and patience.”

With her father’s work as a Lutheran pastor, the family moved several times during Mary Lou’s childhood, living in Andover, Ill.; Arco, Minn.; and Mediapolis, Iowa, where she was a stalwart defender on her school’s basketball team but was always bothered that the rules of the girls’ 6-on-6 game were different than those the boys followed.

Mary Lou worked as an English instructor at Augustana (S.D.) College, before earning her M.A. from the University of Minnesota in 1961. She moved to Boulder as a teaching assistant at the University of Colorado while working toward her Ph.D. in English, which she earned in 1964. She dedicated her 200-page thesis – “Invention in George Gascoigne’s Poetry” – to her parents.

During her time at Luther, Mary Lou was a fixture in the campus community and served in a variety of roles in addition to her teaching duties. She was the director of Freshman Studies from 1974-76; head of the English Department from 1981-86; and member, often chair, of countless committees, notably several times on the Appointment, Tenure, and Promotion Committee. In 1983 when Luther gained its chapter of Phi Beta Kappa, Eta of Iowa, it was largely the result of her leadership and persistence in organizing members to supply information for an application to the National Chapter, a several year process.  She also published papers, gave presentations and continued her own education, studying Shakespeare and gender at a National Endowment for the Humanities seminar, doing sabbatical research at the Folger Shakespeare Library in Washington, D.C., at the University of Minnesota library, and twice at the British Library in London, where she researched the life and writing of Lucy Harington, patroness of the poet John Donne.

She also served as an accreditation consultant and evaluator for the North Central Association of Colleges and Schools during the 1980s, and during the 1990s on two ELCA Boards, Church and Society and Higher Education and Schools, sometimes as chair.  In 1992 she received the Iowa American Association of University Women Distinguished Teaching Award, and she was awarded the Dennis M. Jones Distinguished Professorship in the Humanities for 1995-96.

Mary Lou was an active member of First Lutheran Church where she loved to sing in the choir, served on the church council, led Bible study sessions, and always looked forward to weekly fellowship with the congregation. She also enjoyed helping with the annual smorgasbord dinner during Nordic Fest, although she never failed to note that her family came from Sweden not Norway.

But, first and foremost, Mary Lou loved to teach. Her classes on Chaucer and Shakespeare were both feared and appreciated by students. She prided herself on having all her students’ papers graded and returned to them by the next class period. Former students were invited to share their remembrances upon her retirement and some of the words most commonly used to describe her were: tough, kind, mentor, favorite, challenging, wonderful, great, generous, curious, caring, patient and smiling.

One of the many women who saw her as a role model wrote: “Mary Lou was not a pioneer in any self-conscious way. I never had the sense that she was struggling to find her niche or that she was the underdog trying to make it on the varsity squad, on the contrary, I loved the fact that she was clearly the equal of all her colleagues. In her dignified way, she gave me an image of a woman who assumed she would be taken seriously and was. She so obviously belonged in that department which was known for its strong and dedicated faculty.”

After her retirement, Mary Lou remained a steadfast presence at Luther, making Chapel and coffee in the Union, and exercise at the Regents’ Center, part of her daily routine, along with attending as many lectures and concerts as she could find time for. She taught several Tuesday Seminars on Shakespeare and drama, under Luther’s Lifelong Learning Program. She remained an active member of Phi Beta Kappa and AAUW, organizing election-year candidate forums for the latter, which honored her for 50 years of membership and service. In addition, she and Martin traveled to the Twin Cities to attend plays at the Guthrie Theater and concerts at Orchestra Hall regularly.

Her love of travel took her to much of Europe, where she and Martin introduced students to January term classes in London theater, or to cathedrals and religious communities; but it also took her to Africa and Asia, and throughout North America. She traveled regularly to visit family and friends, whom she cherished.

The year she retired, Mary Lou was honored to give the commencement address to Luther’s class of 2000 graduates. In her remarks that day, she talked about the importance of education and of helping others on life’s pilgrimage, perhaps drawing on her years of teaching Chaucer’s Canterbury Tales with its familiar prologue on the pilgrims’ journey to the shrine of St. Thomas Becket each spring.

“Service is not so much a single project as it is an attitude,” she said. “It is a way of being in the world.”

She also spoke of the joy she experienced in watching her students grow and mature during their years at Luther as they prepared themselves for another beginning upon graduation and ended with these words: “We wish you well on your continuing pilgrimage.”

Her loving family and friends wish the same for Mary Lou.

Mary Lou was preceded in death by her parents Myrtle and Rubert, her brothers Philip, Howard and Garth, and her husband Martin in 2019. She is survived by her son Jonathan and Tia Martinson (Eden Prairie, Minn.).

I'm thankful for the opportunity to reflect of Prof. Mohr's influence, particularly Shakespeare. I remember reporting to her that I worked for Theatre for A New Audience in New York, a company that often produced lesser known Shakespeare plays, and the pride I felt at her appreciation of that job opportunity. We were all so blessed to share in her light.

Dr. Mohr gave me confidence in myself as a woman and a scholar. She was an absolutely perfect mentor and a great intellect. With my English Major I went on to have a long career as a Teacher Librarian. Dr. Mohr was a life long learner and loved literature. She will be dearly missed and my prayers go out for her family.

I was fortunate to be a student of both Professor Mohrs. I admired Mary Lou's unwavering poise and commitment. I also recall her beautiful hair! Condolences on the passing of a bright light in the Luther family.

I send my deepest condolences and sympathy to Jonathan, Tia, their families, and the Luther College community. I am deeply saddened to read about Mary Lou's death. She was an impressive professor, college citizen, mentor and role model to me in my career in higher education. I often thought of her confidence, clarity, and sense of humor as I reflected on challenges and successes in my life and work. Mary Lou and Martin were professors, colleagues, and dear friends. I shall always...

The warm welcome I received from Mary Lou and Martin when my parents and I visited Luther when I was a high school student was a major factor in my decision to attend Luther, and to major in English. My father, who taught high school in Lake City, had always said that Mary Lou was one of his all-time favorite students. I can see why. She was meticulous, enthusiastic, and caring.

We came to know Mary Lou when I was serving First Lutheran Church in Lake City, MN. Her father served the congregation and when we celebrated a special anniversary, we invited Mary Lou back as a speaker. When we retired in Decorah, she was a familiar face at Luther College and we enjoyed our conversations with her. "Blessed are the dead who die in the Lord." "Yes," says the Spirit, "they will rest from their labors, for their deeds follow them." Rev. 14:13

I took as many of Dr. Mohr's classes as I could fit into my English major schedule. What a phenomenal professor!

That was a beautifully written obituary!!

In my first years at Luther Mary Lou made my life workable. I did not understand the culture. I was confused about why people were so careful about speaking their minds. Mary Lou spent a lot of time mentoring me and guiding me and just plain telling me I was OK-no matter what my student evaluations said. I have missed her in Covid times and I know I will miss her kind voice in the future.

Never miss an update about Mary Lou. Sign up today.