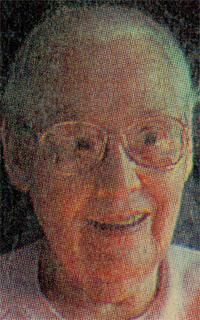 Haley-McGinnis & Owensboro Funeral Home 519 Locust Street, Owensboro, Kentucky 42301 Phone: 270-684-9891 Email: [email protected] Fax: 270-684-9894 Mary Josephine Oberst, 95 of Owensboro, Ky. died on November 13, 2009 at Nazareth Home of Louisville, Ky. She was born on December 15, 1913 in Daviess County to the late John L. Oberst Sr. and Emma Isabelle Crisp Oberst. She is the second of five children, three brothers and one sister. She graduated from St. Frances Academy, Owensboro, Ky. June 1932 and received her RN from St. Joseph Infirmary, Louisville, Ky. in 1936 and remained there in medical surgical ward and operation room until she entered the Army Nurse Corps in November 1937. Her first assignment was Maxwell Field, Alabama, then overseas duty took her to Fort William McKinley on July 10, 1941. On December 13, 1941 she was stationed at Sternberg General. As war was carried on the nurses were moved to various places, Estada Major and on December 25, 1941 to Bataan Hospital #2. On April 9, 1942 she and the other "Angels of Bataan" were moved to the Malinta Tunnel, Corregidor. After capture on May 6, 1942 the nurses were taken to Santa Catalina, July 2, 1942 to Santo Tomas about August 13, 1942 until May 1943; then to the Hospicio de San Jose until September 1944, when she was recalled to Santo Tomas where she remained until the 44th Tank Bn. Freed the prisoners on February 3, 1945. On return to the States February 24, 1945, she was a patient at Letterman General, San Francisco. Later the nursing duties took her to Nichols in Louisville, Ky.; Fort Knox, Ky.; Ashford General, WV and back to Fort Knox. After retirement from the US ARMY, September 30, 1947, she worked at Mercy Hospital in Owensboro, Ky. In September 1950 she attended the Catholic University of America in Washington, DC and received degrees of BSN in 1953 and MSN in 1955 and then became assistant director of nurses at St. Mary Hospital School of Nursing in Evansville, Indiana, ill health made retirement necessary in 1963. After retirement from nursing Miss Oberst underwent many surgeries and in 1993 suffered a stroke which necessitated her going to a nursing home. She belongs to many Right-To-Life organizations as well as Veteran and POW organizations. Military service awards include the Bronze Star Medal, Distinguished Unit Emblem w/2 OLCs, American Defence Service Medal w/Foreign Service Clasp, Philippine Defense Ribbon, Philippine Liberation Ribbon w/BS, WWIIVM, APCM w/2 Bronze Battle Stars. Preceded in death by her brothers, John L. Oberst Jr., Lawrence Allen Oberst, Richard Cecil Oberst Sr., sister, Sister Dorothea, Sister of Charity of Nazareth; nephews, Richard Cecil Oberst & Michael Kerry Oberst. Surviving are her nephews and nieces, H.L. and Susanna Oberst of Pine Grove, California David A. Oberst and his wife, Charlene of Owensboro, Ky. John L. Oberst III and his fiancé, Tracy Day of Owensboro, Ky. Linda C. Walker and her husband, John of Hopkinsville, Ky. Janet Lawrence and her husband, Fred of Owensboro, Ky. Colleen Remole of Owensboro, Ky. Great Nephews and Neices: CDR Tim Hill James Edward Oberst Vincent Oberst Shannon Hill Holzrichter Jon Paul Oberst Kerrie Oberst Overall Jason Oberst Nathan Lawrence Special First Cousin: Charlotte Oberst of Owensboro, Ky. Special Friend: Charlie Hilton of Louisville, Ky. Services will be at 10:00am. Monday, November 16, at St. Stephen Cathedral Visitation at Haley-McGinnis & Owensboro Funeral Home from 4:00 to 8:00pm. Sunday And from 8:00 to 9:30am. Monday at the funeral home Prayers: 6:00pm. Sunday at the funeral home Burial will be in Mater Dolorosa Cemetery Minister: Reverend J. Edward Bradley Online condolences may be left at www.haleymcginnis.com