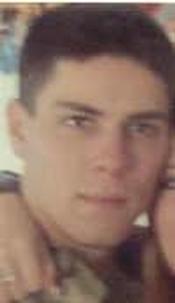 PFC. Michael Robert DeMarsico II, also known as Demar to his military brothers overseas, Mikey to his family and Sunshine to his mother, deployed to Heaven after being killed in action on Thursday, August 16, 2012 while serving his country in Operation Enduring Freedom in Afghanistan.

Attached to 1-23 IN 3-2 SBCT Joint Base Lewis-McChord, Washington, Michael deployed to Afghanistan at the end of March 2012 and took a job which placed him in front of his brothers, always wanting to protect them no matter the cost. He protected and saved his brothers and many others over and over again.

Growing up, Michael was a Cub Scout with Local Pack 35. He was loved by all and a constant competitor with the Rain Gutter Regatta, taking the 1st place medal every year until his last year when his younger brother, Adam took 1st place, which Michael admired.

A talented athlete, Michael played T-ball, Little League and Babe Ruth Baseball. Throughout his baseball career, his father stood proudly by his side as his coach. He participated in the North Adams Youth Football program as an eager peewee and continued through the senior division with the eyes of an eagle and speed of lightning.

He had a love of nature and his favorite moments were spent at Natural Bridge State Park and Mount Greylock, high above the world.

While at Fort Lewis, that love of nature continued on weekends when he and his buddies would travel far up in the mountains. One of his favorite moments was camping in a lava bed at Mount St. Helens. Michael also enjoyed snowboarding, he wasn't very good at the sport but he became a pro at falling hard so the pretty girls would help him up.

What Michael held dearest to his heart was his family.

Michael was born on December 22, 1991, a son of Lisa (Babcock) DeMarsico and Michael Robert DeMarsico.

He will be sadly missed and fondly admired by all who knew him.

Funeral Services for PFC. Michael Robert DeMarsico will take place Saturday, September 1, 2012 at 11:00 A.M. at the First Baptist Church of North Adams, MA. Burial with full military honors will follow in Southview Cemetery, North Adams, MA. Calling hours will be Friday, August 31, 2012 from 2:00 to 7:00 P.M. at the Flynn & Dagnoli-Montagna Home for Funerals, WEST CHAPELS. Memorial contributions can be made to the Wounded Warrior Project through the funeral home, 521 West Main St. North Adams, MA 01247. To send flowers, a card, gift or message, please visit www.flynndagnolifuneralhomes.com.

I took the kids for a scooter ride/walk in the giant cemetery at the end of our road on this Veteran's Day 2014. The kids brought their small American flags with them to place near a veteran's grave to honor a soldier today. They chose to honor Pfc Michael DeMarsico who gave his life for his country and they placed their flags at his grave. Thank you, Pfc DeMarsico, for your sacrifice.

Continued blessings to the Demarsico family! Michael you are remembered

Michael, I never got to meet you, my son was also in C Co. I know your mom on Facebook, you are so very much missed, I see it in her words every day. Tomorrow is the one year anniversary, and we are praying for all those who knew and loved you.
You will always be remembered in our home and honored. We set an extra place setting in our home for holidays. A card sits on the plate with your name on it asking everyone to remember the cost of freedom. It is a small thing, but it is from...

At the going down of the sun and in the morning We will remember them.

PLEASE KNOW OUR SMYPATHY IS WITH YOU.

Hello,
We would like to express our deepest condolences and also to let the Demarsico Family know that we recently sent Care Packages to American troops in the war zones. Each box carried a dedication sheet that includes the name, service information and photo of your loved one. We recognize that this is a humble tribute, but we wanted you to know that it is heartfelt and made possible by thousands of like-minded individuals in the youth hockey community and beyond. We will not...