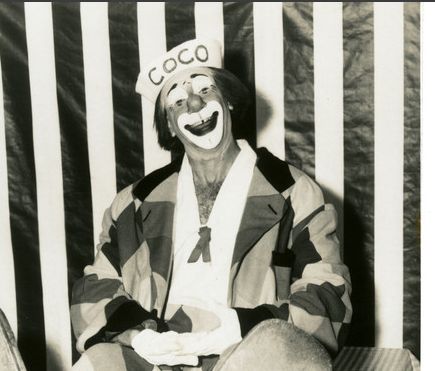 The following story courtesy of The Wall Street Journal By STEPHEN MILLER A habitual recipient of a pie in the face, Coco the Clown was a circus favorite who helped create another well-known clown, Ronald McDonald. Michael Polakovs, who died Dec. 6 at age 86, honed his clown act for eight decades, including a lengthy stint at Ringling Bros. and Barnum & Bailey Circus. Clowning was the family business -- the disheveled Coco persona was inherited from his father, a lifelong clown, and Mr. Polakovs's son Graham has performed as Coco Jr. since the 1950s. After a three-decade career as a circus clown in England, Mr. Polakovs came to the U.S. in 1959, and performed in the center ring at Ringling Bros. He led classic clown skits and paraded around the big-top's hippodrome on 16-foot stilts. For several years, he also worked as an advance man for Ringling Bros., appearing in local and national media to garner publicity. When McDonald's Corp. decided to make Ronald McDonald its national spokesman, the company turned to Mr. Polakovs for advice. He designed Ronald's clown-face features, chose the canary-yellow jumpsuit and gave him big red shoes and striped socks to reflect the colors of the restaurant. Mr. Polakovs went on to star as Ronald in the first national series of McDonald's commercials, in 1966. Mr. Polakovs was literally born into the circus. In interviews, he would tell the story of how his mother, a Latvian aerialist, delivered him in a dressing room in Riga in 1923, shortly after completing a performance. She returned to the trapeze within days, Mr. Polakovs liked to boast. Mr. Polakovs's Russian father, Nikolai Polakovs -- himself the son of a clown -- created the Coco character. The family toured Russia by sleigh, then moved to Germany. Mr. Polakovs performed as Coco Jr. from the age of four, and his siblings performed as Cocotina and Coconut. In 1929, the family moved to England, where Coco and Coco Jr. became stars of the Bertram Mills Circus. Nikolai Polakovs was later awarded the Order of the British Empire, one of Britain's highest honors. Within the hallowed traditions of the circus, Mr. Polakovs was an "auguste" as opposed to a white-faced clown. The auguste is the butt of gags, often perpetrated by white-face clowns who douse them with buckets of water, or conspire to steal their pants. Mr. Polakovs performed dressed in rags, with red floppy shoes, a sailor's cap with his name and an orange wig that stood up whenever he encountered something that would scare a clown. "He was very serious about being funny," says Greg DeSanto, president of the International Clown Hall of Fame & Research Center in Milwaukee. Mr. Polakovs helped found Ringling Bros. and Barnum & Bailey Clown College, which opened its doors in 1968. In 1991, he was elected to the International Clown Hall of Fame, joining performers like Emmett Kelly. Mr. Polakovs retired from Ringling Bros. in the early 1970s. By then, the circus was relying on just a few aging clowns, and their ranks weren't being replenished. Part of the problem, Mr. Polakovs explained, was the era's flamboyant fashions, which made it tough for a clown to attract notice. "Ten years ago, I'd have been gaudy," he told the Washington Post in 1969, standing unnoticed in a crowded hotel lobby. "Now everybody looks like me." Write to Stephen Miller at [email protected]