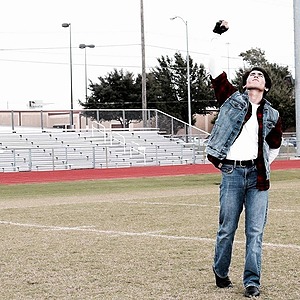 He graduated from Memorial Drive Elementary School in 2009, Spring Branch Middle in 2012, and as Valedictorian, Class Vice President, and Cheerleader of Memorial High School in 2016. He was a junior in the Business Honors Program and Radio Television and Film School at The University of Texas at Austin (a triple major with a minor).

He was passionate about film, public speaking, broadcasting, snow skiing, rugby, football, biking, hiking, international travel, diverse cultures, history and playing the ukulele. Nicky was a member of the Tau Chapter of Kappa Sigma and a member of Young Life. He was a committee member of Genesis, Chase the World, and Student Consulting Initiative, and a member of Texas Cowboys, National Outdoor Leadership School, and UT Cheer.

Nicky is most frequently remembered for his genuine compassion and service to others in need of a friend, his warm playful sense of humor, his creativity, and his quest for knowledge and greater understanding. Nicky was extremely proud of his dual nationalities and Chinese-Western heritages; he coined his own nickname "Panda".

The romantic in Nicky blossomed when he met his soul-mate, Clio Harralson. Two adventurous and silly spirits, they inspired and supported each other for the past two years.

Friends and family are welcome to attend the memorial service, officiated by Dr. John Stephens, on Saturday, November 3 from 1:00 to 3:00 p.m. at Chapelwood United Methodist Church, 11140 Greenbay Street, Houston. Following that, there will be a celebration of life from 3:00 to 5:00 p.m. at Geo. H. Lewis & Sons, 1010 Bering Drive, Houston.

In lieu of flowers, the family requests donations to a new UT scholarship fund set up in Nicky's honor.
Link: http://links.utexas.edu/bllwjds

I graduated many years ago from UT Austin. I did not know your son but, sincere condolences for your loss. God Bless you and your entire family

I am heartbroken to learn of Nickys passing. He was such a kind-hearted smart boy. I loved teaching both he and his big sister, Alexandra. What a special family. Nicky grew into such an impressive young man. His presence will be missed tremendously. Please know I am thinking and praying for your family during this very difficult time. Love to you all.

My heart goes out to nicky and his family and many many friends. Please everyone, just simply say to this family, "i'm very sorry for your loss, you have our condolences. So many people with great intentions say some things that are very painful to hear. No one can understand the depth of pain in losing your child unless it's happened to you.
From one to another, Keep On Being Incredible!
Take baby steps and keep putting one foot in front of the other. We are always...

May the love of friends and family carry you through your grief. Leon and Julia Codron

My condolences to the family. May God grant you strength during this difficult time.