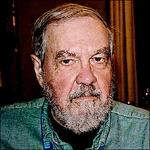 Paul Christopher Spehr  On Friday, December 20, 2019, Paul Christopher Spehr, loving father, passed away peacefully at the age of 88 at the Kline Hospice House after a brief illness. Paul was born August 2, 1931 in Arcada California to Peter and Inez Spehr. He is survived by his three...

Sorry we missed the memorial service. But most of all, we will miss Paul. Another member of this wonderful family has been lost. We are sad.
Bob and Barbara Harris

Chris, you were lucky to have a great dad.

Paul was the eldest of 26 first cousins on his mother's side of the family (his mother was my mother's eldest sister). Most of the cousins were raised in the Midwest so we seldom saw Paul but he was greatly admired for his distinguished work at the Library of Congress and he was always a gracious host when family members visited Washington. I have particularly fond memories of his kindness and hospitality to me when I spent a year in Washington during my military service. He maintained...

Paul was my first cousin and a pillar in our extended family. He was kind, thoughtful and always interested in everyone. He will be greatly missed.

We miss Paul a lot. We "chatted" via FB almost every day. I still look for his responses to my postings and then realize he is no longer there. We enjoyed our many trips to see him in Carroll Valley and enjoyed many rides, seeing the sights. We had a lovely trip to Italy with him to honor Susan.

Paul became my first mentor in the Film archiving world, when I called him as a young grad student in Film to ask him about nitrate film. The subsequent term paper I wrote led my professor at Boston U to recommend me for a one year internship at Eastman Museum, starting me on a 44 year long career as a film archivist. He and Susan became dear colleagues and friends to me and my wife.

Never miss an update about PAUL. Sign up today.