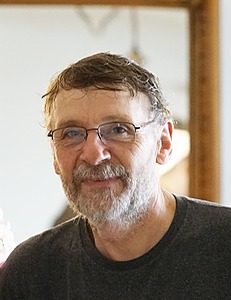 Born on November 18th, 1953 in Belfast, Ireland, Peadar moved with his parents and four younger siblings to Limerick in 1963. His first year in the south was at Coláiste na Rinne, an Irish language boarding school, where he developed a lifelong love for the Irish language and culture. He completed high school and university studies in Limerick, the latter earning him a graduate scholarship to study applied math at the University of Virginia in 1976. While he loved math, UVA introduced him to two much greater loves in life: his bride Janpim Punyanitya and the Charlottesville community. He would remain devoted to both for the next 42 years.

HIS LOVE OF FAMILY

While he died young, Peadar lived passionately, with his greatest passion and first love being his family. A devoted husband and father, he so naturally and enthusiastically extended himself to his grandchildren too, who affectionately called him Pop-Pop. He loved young children and was drawn to any opportunity to play with and entertain them. He was particularly proud of his older grandchildren, in academics and sports, his granddaughter Gwen receiving an appointment to attend the US Naval Academy and his grandson Brandon's high school soccer team winning the Virginia State Championship. He never missed a match. Just this August he and Pim celebrated their 40th wedding anniversary with a family holiday at the shore.

He was ever-present with his birth family too, visiting Ireland annually, and throughout the year proudly sharing news and photos about his Charlottesville family, while also generously offering help and dispensing advice in the way eldest siblings do. He had misgivings about being so far from Ireland when his parents died, eager to help the older siblings care for the younger ones. In that spirit, he and Pim opened their home to his teenage siblings every summer throughout the 1980s, an upshot being that two of them now make Charlottesville their home.

In the past two years Peadar became the pre-eminent historian of a family whose ancestors have lived as far apart as Newfoundland, Argentina , South Africa, Australia, India, China, Indonesia and Mesopotamia. The word "consumed" understates the level of passion and energy he expended on genealogical research: communicating with relatives and fellow researchers across the globe; poring over genealogical records online, and in church and government archives; and visiting gravesites, and other sites in Ireland, Newfoundland, PEI, and Nova Scotia, supplementing his and others' research with new insights and photos. He loved sharing stories he learned along the way and bringing personality and humanity to ancestors previously known only by their names and dates. A search of his computer this weekend for his own will turned up hundreds more belonging to his ancestors.

A keen rugby player in Ireland, Peadar went on to play for UVA during his time there - a heyday of UVA rugby - and continued to play for the "Old Boys" each year, even as a young grandfather. It was through rugby that he began to establish his extensive community of friends in Charlottesville, and he remained in touch with his UVA teammates to this day. True to form, Peadar never hung up his boots. When his playing days came to an end, he turned to refereeing, travelling to various locations across Virginia to referee matches each weekend during the season. He blew his final whistle less than a week before he died. He served as Treasurer of the Virginia Rugby Society, applying his organization and financial skills to good measure. Among his VRS referee colleagues and players, he made many friends, and was highly respected for his generosity and decency. He enjoyed watching rugby too and remained an avid Ireland and Munster supporter, to the point that his referee's capacity for objectivity was known to be compromised occasionally by his home team bias.

By age 30, Peadar had lost both his parents to cancer and a few years later his youngest son Ronan, at age 2, was diagnosed with cancer. This began an intensive, and successful, journey with UVA's best healthcare professionals, and spawned Peadar's deep gratitude for and commitment to the cancer cause. He co-founded Charlottesville/Albemarle's annual Relay for Life event, raising awareness and funds for the American Cancer Society, constantly recruiting friends and family to participate. He never did anything in half measure and was not afraid to stand out, so somewhat uncharacteristic for the Keswick Country Club, he walked door-to-door in his Birkenstocks to raise funds and recruit interest among his neighbors. For three months of the year, his car was a mobile storage unit filled to the brim with Relay for Life paraphernalia. And year over year, with his growing supply of Relay for Life caps, t-shirts, and an oversized bomber jacket, he was a walking billboard for the Relay for Life.

On July 4th, 1995, Peadar and Pim became American citizens at a Naturalization ceremony at Monticello. He was very proud of becoming an American and that pride manifested itself in civic duty. He would always encourage people to vote, no matter the side of aisle they stood on. He believed in the power of participation. Most recently, with his extroverted nature, he walked door-to-door encouraging people to get out and vote for Leslie Cockburn. With perfect strangers he'd strike up conversations and often discover some connection they already had.

Partially due to his frugal nature and partially due to his can-do nature
Peadar was the consummate DIY man. He refused to get help with repair work on the house or cars, determined to do everything himself, from replacing gutters in the rental property, to putting up new shingles when the tree fell on the roof, to laying tiles on the front porch, a place most dear to him. It was here he sat to watch the hummingbirds come to feed, and would laugh at one territorial bird that kept all three feeders to himself, chasing away the others that came to partake in the spoils.

Other than the occasional pause to observe the hummingbirds or watch a rugby match, Peadar rarely stopped. He was always working on something, most often in the service of others. After retirement from GE, he continued to work full-time at two other companies, then went back to work half-time at GE for a few years. With the local division of GE recently acquired by Emerson, they asked him to return to work full-time and he agreed. He was looking forward to starting that job.

Throughout his 42 years in America, Peadar also maintained and developed his commitment to the Catholic faith, an aspect to his life that he considered fundamental to everything else. In this he was greatly assisted, in a serious yet high-spirited way, by his best friend from high school days, Jim Corkery. Jim, a theologian, was a frequent guest of the Keswick Littles and was a hugely positive influence on their lives. Peadar has been a member of all three of Charlottesville's Catholic Churches. During his university days, he attended St. Thomas Aquinas. After becoming a father, he attended Holy Comforter Church, where his children received the Sacraments. At the time of his death, he was a parishioner and reader at the Church of the Incarnation where he attended All Saints Mass the day before he died.

HIS LOVE OF FISHING

Besides spending time with family, Peadar's favorite pastime was fishing, and even that had a very strong family connection. As a young boy, he learned to fish with his dad on the Owenduff River in Ballycroy, Co Mayo in Ireland. He travelled to his family retreat in Ballycroy often and for weeks at a time, visiting and fishing with his siblings and friends. He cherished most fishing the Tarsaghaun, the wildest stretch of the river, where he caught his first salmon at age eleven. His last day on the Tarsaghaun was just seven weeks before he died, and it is here he shall return, at his request, to rest forever in peace.

Through all these communities and activities, Peadar made many many friends, and stayed in touch with them over the years. Always one to lend a helping hand, he was respected and loved for his enthusiasm and high energy, his generosity and decency.

His family welcomes you to come together to celebrate his life. Funeral mass will be held at 2:30pm Saturday November 10th at the Church of the Incarnation, Charlottesville, followed by a celebration of his life. (Bright-colored clothes preferred).

In lieu of flowers, donations can be made to the American Cancer Society in his memory at https://www.crowdrise.com/o/en/campaign/peadar-little-memorial-fundraiser.

I was born 370 days after you and our patents said that, as a toddler, you spoke so well on my behalf that my own speech development was delayed!

You taught me so much during your life, through our ups and downs. And you gave your siblings Pim, a sister-in-law beyond anyones imagination and a daughter-in-law who soon...

Never miss an update about Peadar. Sign up today.

Church Of The Incarnation