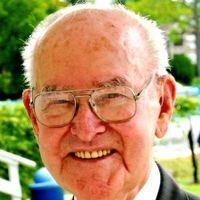 Those desiring may make contributions to the Alzheimer’s Association.

Visitation 3-8pm Wednesday and 10am Thursday until the time of the service at the funeral home.

A Masonic Service will be conducted at 7 p.m. Wednesday at the funeral home.

Ray was born on a farm outside of Parma, Missouri July 3, 1925. The son of the late James Monroe Dillard and Sadie Lee (Corlew) Dillard. He was the 10th of 11 children in the family. The family moved to Flint for the first time in 1929 when he was 3 years old after the family lost the farm in the stock market crash. The family moved back and forth between Flint and Parma depending on the availability of work. He lived 16 different locations in Flint. The family moved so often that he spent 2 and one half years in the first grade. He would say that he remembered asking his mother if she thought that I would ever get out of the first grade. Thanks to summer school he finished high school in 2 ½ years. He graduated from Central High School, Class of 1943 with his original class. He later attended General Motors Institute and IBM for special courses. Summer school was also where he met his future wife, Elizabeth (Betty) Stirling. They married at age 19 although Ray was only 18 on the marriage certificate, a fact that enjoyed teasing her about for their entire married life. He was a devoted and loving husband to Betty through many years of illness. Betty died on December 13, 2006 after they were married for 62 ½ years, which was longer than anyone else in the family. In September 1943, after Ray was rejected for military service, he was hired as office boy at Chevrolet Manufacturing. Following a series of promotions, he was transferred to Chevrolet Central Office and later to General Motors Central Office. Ray retired as Cost Control Administrator (equivalent to Superintendent.) He was responsible for developing the universal coding for all General Motors parts across the various divisions, saving the company millions of dollars. Ray retired after 37 years of service in 1980. Ray was active in the Masonic Order and was a member of many Numismatic Organizations and has attended Numismatic Conventions in every corner of the United States making many, many friends all over the world. Ray kept busy designing and rolling elongated coins for keepsakes and for celebration favors. He even rolled coins for the Australian Olympics in 2000.

He was preceded in death by granddaughter, Stacey Lynn and grandson, Robert Edward Krug II and special friend Connie Gilmet.

We were decades old friends with Ray and for many years he rolled our annual ANA elongate. It is hard to believe he is gone. His wide smile, friendly nature and attitude will be missed by the hundreds of friends he had around the country. Though he is gone and will be missed his elongates will live on forever. Our prayers, thoughts and sympathy to his family. Sincerely, John and Nancy Wilson, Ocala, FL

Rest in Peace, your numismatic friends will miss your smile and friendship. Thank you for being you, and thank you for your countless hours of volunteer service.

I first met Ray at the Dearborn Hyatt show in the 1980's. He was always willing to greet and talk with anyone that would stop. Have seen him may times at national shows around the country and always admired him for his dedication. The hobby has lost one very brilliant shining example of the word of numismatics.

I met Ray through our shared love of elongated coins, he inspired me to get re-interested in coin collecting. We would often sit together or chat at our flint flying eagle coin club meetings or elongated collector meetings. When you were with Ray you knew you were in the presence of greatness. He was very highly regarded and immensely respected, yet he was caring and humble enough to be friends with anyone. He was always smiling, and would always take time to share his...

Ray had a good friend and fellow coin collector who lived near my school in Wayne, MI. I used to transport coins between the two and they laughingly called me "The Pony Express" Ray supplied Lord's Prayer pennies to my husband Joe and they became Joe's trademark. He passed them out wherever he went. I saw Ray on Saturday and had a delightful conversation with him. I will treasure those few moments.

I met Ray for the first time last year in Chicago for Worlds Fair of Money..
I brought along my collection of old elongated pennies which I got several from him. He had a genuineness about him. I will always remember his smile and willingness to share his wisdom.
The deepest condolences to his family.

A friend to all who met him. A great contributor to the Elongated Hobby ,He will be missed and remembered by all who knew him,