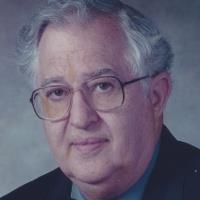 Born February 2, 1933 to Bertha M. Messinger (Theodore Jensen).  Graduated Monroe High School in 1951, married Oneta Dinges June 10, 1951. Graduated Iowa Wesleyan College in 1955, graduated from Chicago College Osteopathic Medicine in 1958. Completed two residencies Obstetrics/Gynecology and General Surgery.  He was in private practice from 1967 to 2012.  Served the state as President of the Illinois Osteopathic Medical Society, chief of staff of Olympia Fields Osteopathic Hospital twice, service as a delegate to the American Osteopathic Association for many years, served the AOA as hospital inspector for several years, active in Boy Scouts of America.  Preceded in death by his step-father Ray Askey, mother Bertha Askey, father Theodore Jensen, and brother John Robert Askey. He is survived by his wife Oneta, children Jerry L (Jill) of Crete, IL, Donna C (Tom Wallis) of Macomb, IL, and William V (Susan) of Deerfield Beach, FL; four grandchildren Jeffrey (Rachel), Sandra (Zach), Julie (John) and Andrew (Ellen); great granddaughter Leah Marian Jensen. Three half brothers Neil (Sharon), Gary (Ann), and Dean (Brenda) Jensen and one sister Donna Anderson (Dan); 13 nieces and nephews, 22 great nieces and nephews and many great great nieces and nephews.  During his lifetime he enjoyed model airplane flying, traveling by motor home, automobile or airplane and he was able to travel throughout the United States, Hawaii, Alaska, Newfoundland, England, Scotland, Ireland, Denmark, Germany, Holland, France and Italy. One of the interesting trips was to South Africa where the family toured by car and trailer.  His hobbies were model trains and antique automobiles.  Cremation with remains in Orangeville Cemetery. There will not be a visitation or service at his request.

As long as I lived in Illinois he was there for me and I bless him for his wisdom teaching and understanding. I have survived cancer twice a stroke hip replacement etc. And thanks to him I keep moving and exercising.

Dr. Jensen was our family doctor for quite a few years. Then when I became an adult I took my family to him. He helped us through some bad times (physically), always with a smile. He delivered my oldest daughter in 1981 but had stopped that practice when my youngest came in 1996, but he and Oneta sure ribbed me about being a young (44 years old) mother! He also did all our preparatory doctoring when we moved overseas in 1997. I'm glad we knew him. He wasn't perfect, but he did catch...

I just researched and found that our former dr passed away. So sorry to hear this. He was a good dr and made you feel like you were part of his family. He doctored our family, my kids and my mom. She made several stand up stuffed Mickey and Minnie Mouse "dolls" for him. I am so glad to have known him and he also would teach you about medical things while treating you. I learned a lot from him about medical things and medicine. They just don't make drs like him anymore. Goodbye to a...

I am so sorry to hear that Richard (Dr. Jensen) passed away. He was our family doctor for years and years, almost 50 years I think. He was a wonderful and caring doctor. My sympathies to Oneta, Jerry and Jill and the entire family.

Please accept condolences from me and the entire Moy family of former How How Restaurant of South Holland. We are so grateful for you and Dr. Jensen came to my parents' restaurant all the time for many, many years. A lot of good memory with Dr. Jensen, you, and your children.
All of my love and gratitude! Take care.

Please accept condolences from all of us at the Illinois Osteopathic Medical Society who knew you and your husband for many years. Thank you for your service to both the IOMS and the Advocates (nee Auxiliary).

May you be blessed with good memories of your life together.

Deepest condolences. Dr. Jensen was truly an icon within in the osteopathic community; his unwavering commitment and dedication to his profession inspired the next generation of DOs; and his attentive and empathetic style made him beloved by his patients. His light will continue to shine in those who were blessed to know him.

Dr. Richard saved my life on two occasions and took care of me with fatherly love for about 30 years. I am so grateful for him in my life. Happy he is in heaven and at rest now. All my love and gratitude. Janie Roberts, Steger, Il.