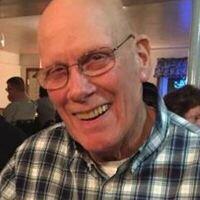 Robert “Bob” J. Briccotto passed away peacefully on February 18, 2021. Bob was born on August 4, 1935 in Wilmington, DE. Known as a gentle giant, Bob never missed an opportunity to enjoy life with his family and friends. Anyone could start a conversation with Bob, and end it feeling the warmth of his friendship.

A dedicated worker throughout his entire life, Bob spent most of his career as Owner of Esquire Plumbing & Heating. With values instilled in him at his father’s business - Silverbrook Lawnmower and at Salesianum School, he mastered his craft prior to opening Esquire with his wife Virginia in 1971. 50 years later, Esquire continues to serve the community under the operation of his son, Rob.  Bob was so proud of his Rob and what they accomplished together.

Bob’s greatest point of pride was being an extraordinary husband, father, grandfather and friend. Known for his contagious & full-bellied laugh, entertaining storytelling, wise advice, and an enormously generous heart, many amazing memories were created with his beloved wife, Virginia. Bob’s adoration for her was palpable – and their 64-year marriage was one for the storybooks filled with love.

Bob truly enjoyed spending time in nature, especially with his son Rob. He was an enthusiastic outdoorsman with a particular enjoyment of fishing. He and Rob spent many a day on the water together. Bob admired his daughter Barbara’s notable career as commercial interior designer and looked forward to visits to see her in North Carolina. Bob’s bond with his grandson, Peter, was deeply special – and was evident by the numerous skating competitions, theatrical productions and fundraisers he attended on Peter’s behalf. He was a proud grandfather.

Bob’s inquisitive nature was evident through his various hobbies. He was an accomplished wood worker – most notably Ducks Unlimited Artist of the Year in 1999. From bowls to scale model boats to decoys, Bob’s award-winning pieces brought joy to many.  He enjoyed his time in the Brant’s Nest carving and “solving the world’s problems” with special friends.

Bob supported his community with passion, and his service was celebrated as an honorary member of the Odessa Fire Company.

Bob’s family is thankful for the outpouring of prayers and support from family and friends. Additionally, they appreciate everyone from Seasons Hospice, Odessa Fire Company, Visiting Angels, and ChristianaCare HomeHealth for their compassionate & heart-warming care.

Felix and I would like to offer our sincere sympathy to all of you at this time . He was truly he a great person.

Ginny and family: So sorry for your loss. Bob was such a friendly and talented person. He will be missed. I think of him whenever I look at his decoys around my home.

Dear Virginia, Rob, and family. We are so sorry to hear of Bob's passing. Our thoughts will continue to be with you. And we will always remember him fondly. His smile and his laugh go on! Love, Mary Jo and George

Mrs, Bricotta, Barbara , Robbie , and Peter , I am so sorry to hear that Mr. Bricotta passed away , your family was a part of our family and we love ur family very much. I will always remember the good times esp at ur house ..The Ski bike it was awesome and ur dads laughter and orneryness ..i loved to when they came to the house we always had a good time....I will say some prayers....Love you all , Give each other a hug and it will be from me ...

Virginia and family sorry to hear of your loss. Will keep you in my thoughts and prayers. Becky Pernol

Aunt Virginia, we are so sorry for your loss. Mary Ann and I so looked forward to spending time with you and Uncle Bob. He was always so upbeat and smiled with almost everything he said. He will be missed by everyone who was fortunate enough to know him. With Love, Mary Ann and Gary

To Bob's family,
We met Bob when we did antique shows. He always had a smile on his face, never spoke bad about anyone, always joyful, pleasant, and great to be around. We will surely miss him. Please watch over your mom. She is also one great lady. Sandy & Bill

we will miss bob at kellys. always friendly and lots of fun. may he rest in peace. Prayers to the family,

Ginny, I am so sorry to hear of Bob's passing. Our thoughts and prayers are with you and your family. Bob was a good man.