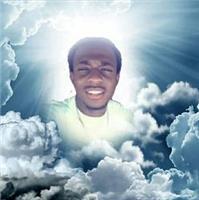 Mr. Robert Leon Walker, Jr., affectionately known as “Rabbit Rabbit” born October 10, 1997 departed this life unexpectedly on November 17, 2017 in Richmond, VA.  Robbie was a loving young man who would give you the shirt off his back if you needed it more than him.  He was a loving and caring son.

Robbie was baptized at an early age at Hope Outreach, 7th Avenue, Hopewell under the leadership of Pastor John Merritt.

The family will assemble 3:30 P.M. at the funeral establishment.

Family members and friends are invited to pay final tribute to Mr. Walker and watch the funeral services live online at www.jmwilkersonsince1874.com.

My condolences to the family of Robert who now walks on the celestial shores of heaven. Rest in heavenly peace.

I am so sorry to hear about the loss of your loved one. Sending my prayers and condolences. May you continue to lean upon God for comfort to help you endure during this time. Psalms 146:5,6.

God gained another angle way too soon. I watched u from a little boy grow up into a loving, caring, understanding,young handsome man that would do anything for family and friends. I have so many memories with u and I cherish them all and forever I will hold them in my heart.
R.I.P SON.
YOU WILL BE DEARLY MISSED AND LOVED, AND NEVER FORGOTTEN..
I LOVE YOU SON..TIL I SEE YOU AGAIN..

Hoping that you will be comforted by reflecting on the wonderful memories; and may our heavenly father's promise for the future sustain you in your time of sorrow. Hosea 13:14

I watched you grow into a fine young man only to be taken to your eternal home far too soon. Rest in the arms of Jesus Robert, and know you will be missed always. It was a blessing to have known you sweet one.