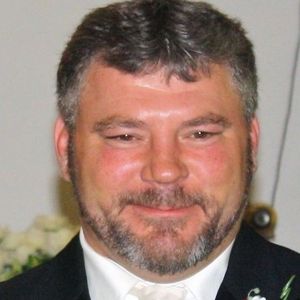 Ridgeway – Robin F. Reeson, age 46, of Ridgeway, tragically passed away on Saturday, March 24, 2018 at his home. He was born on January 10, 1972 in Dodgeville, the baby boy of Ralph and Helen (Hach) Reeson, Sr. He graduated from Dodgeville High School in 1991, where he wrestled and played football. He then apprenticed under his father as a carpenter. Robin was an avid outdoorsman; he loved nature, gardening, morel hunting and especially fishing. He would take care of any stray dog or cat in Ridgeway and called himself the Caretaker of the Ridgeway Humane Society. He would do anything for anyone and his nieces and nephews were his pride and joy. He worked as a union carpenter for Local 314. Robin was preceded in death by his parents Ralph and Helen, his brother Russell and his nephew Tyler Reeson. Robin is survived by his wife Melanie; his step children Kayla, Spencer and Austin; his siblings Rose (Jackson) Dobie, Helen (John) Godfrey, Ralph Reeson, Jr. (Sue), Randy Reeson, Christine (Paul) Cardin, Robert Reeson, Rock Reeson, Regina Reeson, Jennifer (John) Meeker, Ronald (Fawn) Reeson, Rex (Kimberly) Reeson and Reggie (Paula) Reeson; numerous nieces, nephews other relatives and friends. Funeral services will be held at 3:00 p.m. on Saturday, March 31, 2018 at ST. BRIDGET'S CATHOLIC CHURCH in Ridgeway. Fr. Stephen Petrica will officiate. Friends may call from 11:00 a.m. until time of services on Saturday at ST. BRIDGET'S CATHOLIC CHURCH. Due to Easter weekend, in lieu of flowers, the family suggests that memorials be made to the Robin Reeson Memorial, c/o Farmers Savings Bank.

Sharing your sadness in the loss of Robin and sending you comfort during this difficult time.

We are so sad for all the Reeson family. Robin was a friend of our boys since he and Kevin were 4 years old. Kevin always said that the best birthday party he ever went to was one of Robins. He got to swing on a rope in the barn, and ride a pony.
He will be missed.

My deepest sympathy to the Reeson family. When John and I were first married and we would get done milking the cows we used to visit the family when they lived on short cut road. Ralph would still be milking cows and John would go to the barn and I would go to the house. I know the pain of loosing family loved ones. It never quite goes away. It has just been a year since we lost our son Scott. Scott was 48 years old, Your brother now is in the palm of God's hands and the Angels have...

Our hearts,thoughts and prayers are with you all. Please accept our deepest sympathy. We are sorry we can not be with you in person at this time. Sending our love. Dennis and Martha Hoeger

We are so sorry to hear of your loss. Our prayers are with your family.

Reeson Family - My heart breaks for you. I have nothing but fond memories of Robin and spending time with your family. My deepest condolences to all of you. I hope you find comfort and peace in the days ahead. Robin will be missed.

Sorry for the your Loss, I'm a 1st cousin of Robin's Dad, Ralph. The only members of Ralph and Helen's family I ever knew was Helen and Rose, I used to see them at their Grandparents house. [ John & Gertrude Reeson] once in a while.X

CONDOLENCES from the Gerald Edl family

My sincere sympathy for your loss and prayers for you all for healing in the difficult days ahead.

Never miss an update about Robin. Sign up today.