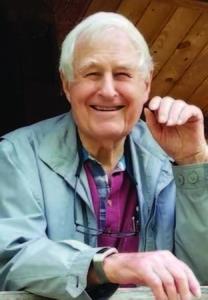 Born on September 18, 1928 in Los Angeles, California, Steve grew up in Tujunga with his parents, Croatian immigrant and retired policeman Steven George White (Stojan Sutalo) and Helen White (née Blanchard), his sister, and his two brothers.

Eager to serve his country during World War II, Steve unsuccessfully attempted to enlist while underage. Following early graduation from Verdugo Hills High School in 1946, he pursued studies via scholarship to Occidental College. In 1948, he joined the United States Navy Reserve as an enlisted seaman recruit. Soon after, he continued his studies via a Naval ROTC scholarship to the University of Southern California (USC). In 1951, he made the best decision of his entire life and married Mary Anne Landreau and commenced a (rapidly-growing) family.

As a commissioned officer, Steve served aboard the cruiser USS Manchester (CL-83) during the Korean War. In 1953, he entered the submarine program and served aboard the diesel submarine USS Tang (SS-563). Three years later, he entered Admiral Rickover's prestigious Naval Nuclear Power Program. Steve and his classmates, who comprised the second class to pass through the rigorous training at the Naval Nuclear Power School in New London, Connecticut, were known as the "Dirty Nine". Following further training at the nuclear prototype reactor in Arco, Idaho, Steve received assignment to the USS Nautilus (SSN-571), Rickover's first nuclear submarine. Steve remained with the Nautilus from 1957 to 1960. In August 1958, he participated in Operation Sunshine, the first successful transpolar crossing—traveling from the Pacific Ocean to the Atlantic Ocean via the unexplored and dangerous depths of the Arctic Ocean. Emerging in the Atlantic Ocean, Steve sent the coded message of their achievement, "Nautilus Ninety North". He was the last surviving officer of the "PANOPO" crossing (Pacific to Atlantic via the NOrth POle).

Following further training in 1960 at Westinghouse's Bettis Atomic Power Laboratory in West Mifflin, Pennsylvania, Steve served aboard the USS Ethan Allen (SSBN-608), first as Engineer and later as Executive Officer. During this assignment, he participated in Ethan Allen's live Christmas Island shot (in 1961), the only complete missile test with an armed warhead ever ordered, and was engaged in the Cuban Missile Crisis.

In 1964, Steve received his first shore duty assignment, serving on the staff of the Deputy to the Submarine Force Commander Atlantic (SUBLANT), during which time he unilaterally developed the Operational Reactor Safeguard Examination (ORSE) for submarine personnel. Two years later, after training at Rickover's CHARM school in Washington, D.C., he served as commanding officer of USS Pargo (SSN-650). Under his command, Pargo accomplished significant North Pole exploration and experiments. In 1969, he served as Commander of Division 102, and the following year went to work directly for Admiral Rickover at Naval Reactors.

In 1972, Steve received the "plum" assignment to serve as Commander of the Navy's second Fleet Ballistic Missile (FBM) Submarine Squadron in Rota, Spain. Two years later, he was named Commander of Submarine Group Two, based in Groton, followed in 1976 by an assignment to the Office of Naval Material (NAVMAT), serving under Admiral Michaelis. He continued his prestigious service for nine more years, including two years serving under the Deputy Chief of Naval Operations (OP-02), in charge of Submarine Warfare, three years as COMSUBLANT, and two years as Chief of NAVMAT. Throughout his over thirty years in the Navy, he demonstrated deep love of his country, dedication to the submarine service, and an unshakable commitment to reform and fiscal responsibility. He received many awards, including the Navy Distinguished Service Medal, the Legion of Merit (four times), the Meritorious Service Medal, the Navy Commendation Medal, and the Presidential Unit Citation.

In 1985, following his retirement from the Navy, Steve commenced work as a contractor. That same year, he took charge of the nuclear power division of the Tennessee Valley Authority (TVA), and undertook intensive reform and restructuring leading to the successful restoration of TVA's Sequoyah PWR Unit 1 in 1988. Soon thereafter, he retired from TVA.

After retirement, Steve dedicated the rest of his life to the care of his beloved wife, innumerable building projects, cross-country trips (in a motorhome nearly as large as one of his submarines), and time with his extensive family.

Steve was predeceased by both of his parents, his sister, Frances, and his brothers, Raymond and Richard. Steve is survived by Mary Anne, his devoted wife of 70 years; his seven children, Valerie White, Denise Walker, Lori Donlon, Steven White, Kenneth White, Brice White, and Beth Elliott; their spouses; 35 grandchildren; 42 great-grandchildren (and counting), and many nieces and nephews. When he considered all that he had accomplished in his life, Steve insisted it was the result of hard work and "God shining His light on me". He unequivocally stated over and over again that his greatest "achievement" was his children, grandchildren, and great-grandchildren. His unique blending of toughness and charm touched many. He is already sorely missed, and will be cherished in the hearts of family and friends.

Mary Anne and the family are overwhelmed and grateful for the outpouring of support and affection from all who loved Steve. A Mass of Christian Burial will take place on Saturday, February 13, 2021, at 2 p.m. at St. Thomas Aquinas University Parish in Charlottesville. The burial will be private. In lieu of flowers, the family welcomes donations to the St. Joseph Shrine at St. Thomas Aquinas University Parish, 401 Alderman Road, Charlottesville, VA, 22903 (which is in honor of Steve and Mary Anne).

Eternal rest grant unto him, O Lord, and let Your perpetual light shine upon him. May his soul and the souls of all the faithful departed rest in peace. Amen.

An amazing human being and a great leader. I had the honor of having a conversation with him a couple of times. Fall 1982, when Admiral White was SUBLANT I was serving on the Uss Groton, but was riding and assisting the Uss Philadelphia during a PCO training event. It just so happened that one of the PCOs was going to be my new CO on the Groton. We were in sonar when he stepped in and stood next to me. He looked at my hat, smiled and said to me, "Are you here to spy on your new...

Rest your oars brother and may your eternity be peaceful.

I was on the commissioning crew of the Pargo. Then Capt. White was one of the finest officers I ever sailed under. He was the first Captain that ever recognized me by giving me a letter of commendation for my work in the radio shack during the search for the loss of the Scorpion. The world has lost a giant of a man. My condolences to his family.

I didn't know Admiral White, but he was one of the "giants" of the submarine force on whose shoulders I was lucky enough to stand during my career in the Navy. His service, and personality were legendary and well-respected. Rest your oars, sir, we have the watch. To his family, may time and good memories heal the sharp pain of loss.

Always a gentleman, the Admiral will be missed by many. He was a force of nature and he left an indelible mark not only in the U.S. Navy, but with all of those whom he touched throughout is life. Rest in Peace, fair winds and following seas.

Dear Mary Anne (and all of the White family),
I wish to share my sincere condolences for the passing of your dear Admiral Steve. I only crossed paths briefly with Steve but both times are locked in my memory. One was his 2018 reunion speech at NL commemorating Nautilus 1958 under ice transit (I recall some 30+ family members attended-WOW!). One of his shared stories that day included his suggestion that you, Mary Anne, "call the governor" for his help to resolve an emergency...

I had the great privilege to serve with Adm. White in Nautilus, then a Lt., during his tenure in that magnificent submarine (1957-1960). He was one of the most competent, intelligent, and fun officers with which to be associated. We met at many reunions over the years and it was always good to see and talk to him each time. The last was at the 2018 60th PANOPO reunion in Groton, CT where we reminisced and were entertained by his witty speech.
We are greatly saddened by his passing...

Life´s "coincidences" led me to learn of Steve´s passing just now. It´s been many years since I watched him refinishing a floor in Ledyard, and my last memory is of your home on base at Christmas time, I believe. My sympathy to you all, both family and friends. May you find comfort in the many years of fond memories, and the sharing of those memories in the days ahead.

With deepest sympathy to Mrs. White and the entire White family. love, Lina and Jonathan Woodall This photo of the USS TANG wardroom from circa 1954 captures the "early years." Admiral White, my father, Reuben Woodall, Lew Neeb, and Bob Hale.

Never miss an update about Steven. Sign up today.