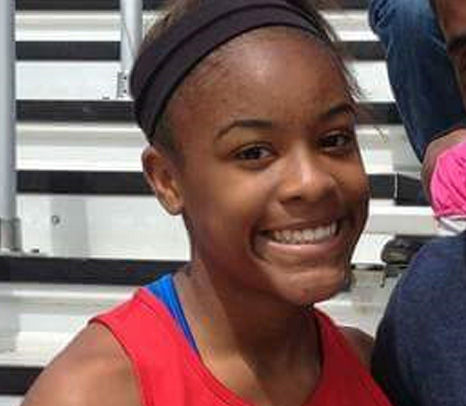 GAY Trinity Tylia, was born in Lexington, KY on Dec 12, 2000 to the parents of Tyson La'Shane Gay and Shoshana Nicole Boyd. She attended Clays Mill and Sanders Elementary school in Lexington, KY and Scott County Middle School in Georgetown, KY. After moving back to Lexington, Trinity attended Lafayette High School. Trinity accepted Jesus Christ as her savior at the age of six. Her love for God and life was abundant through her contagious smile and exuberant attitude. She was a beloved daughter, sister, niece, cousin and friend to all those who were blessed to know her. Trinity was caring and compassionate, yet fierce and determined as a competitor. Trinity's love for competition began at age five when she began competitive cheer-leading. At the age of fourteen, her cheer team competed in the world championships in Los Angeles, CA and were featured in the movie "Champions League". Trinity also excelled at track and field and was a rising star who began competing at the local, state and national level in the 6th grade. Her achievements include 100m and 200m titles, as well as various records held at Lafayette High School. With aspirations of becoming a plastic surgeon, she maintained straight A's throughout her academic career. Funeral arrangements for Trinity Tylia Gay are set for Saturday, Oct 22, 2016 at 12pm at Southland Christian Church in Nicholasville, KY. Visitation will be from 9am-12pm on Saturday at Southland Christian Church. Burial will be Monday, Oct 24, 2016 at Greenwood Cemetery in Russellville, KY. Gamble Funeral Home, Hopkinsville, KY in charge of arrangements. Trinity leaves behind to cherish her memories: her father Tyson La'Shane Gay; her mother Shoshana Nicole Boyd; her brother Tyson Gay, Jr.; her maternal grandparents Charles William Boyd Jr. of Russellville, KY and Debra Boyd Conley of Lexington, KY step grandfather Keith Conley of Cincinnati, OH; her paternal grandparents Gregory Mitchell of Lexington, KY and Tim Lowe and Daisy Gay-Lowe of Prattville, AL; her maternal great-grandparents Bishop James H. Bell, Sr. and Mary Ann Bell of Russellville, Kentucky; her paternal great-grandparents Delores Gay of Winter Garden, Florida and Matt Gay and Edna Gay of Versailles, KY. A host of aunts, uncles, nieces, nephews, cousins and friends. The thumbprint of Trinity's beautiful soul and spirit will forever leave an impression upon our hearts. Therefore you now have sorrow; but I will see you again and your heart will rejoice, and your joy no one will take from you. St. John 16:22.

TO THE FAMILY OF TRINITY GAY: My heartfelt condolences to each of you on the passing of your loved one. May our Lord encamp around each of you and give you His Peace, Comfort, and above all His Love. May He place around each of you those who would support, pray with and for you all, listen to and love each of you . I watched Tyson during the Olympics and I believe Trinity would have been an asset to the Olympics. God be with each of you in the days, weeks, months, and years to come as you...

I lost my son to senseless gun violence. Praying for every family, friends that's affect by their lost!

To Trinity's parents I am so sorry for this devastating loss of your beloved daughter. The family has my deepest sympathy. So young and so precious in not only your eyes but also in the eyes of our Heavenly Father. ' He took the children into his arms and began blessing them'. Mark 10: 16

I am very, very sorry for your lost. I hope in time God will ease your pain.

Family and Friends of Trinty Gay, What a legacy, I am so sorry for your loss ESPECIALLY on one SO YOUNG and Beautiful. May you be comforted by the outpouring of love surrounding you and your family. I hope you find comfort during these difficult times. The Bible tells in 2 Thessalonians 2:16 that God loves us and gives us "everlasting comfort." From this, we know that God will provide comfort for you.
You are in my thoughts. Trinty may be Gone from your sight, but never from...

Never miss an update about Trinity. Sign up today.