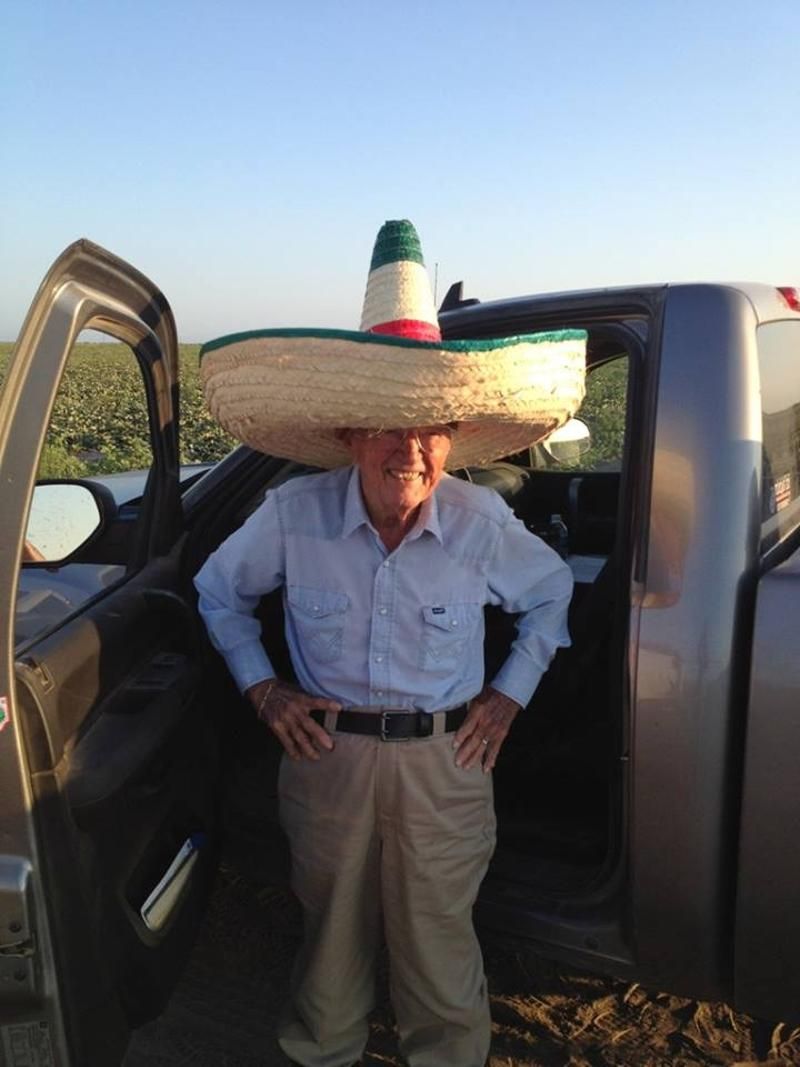 Wallace Wiley Martin was born on August 28, 1924, in Indian Gap, Texas to William Martin and Nora Harris Martin. He peacefully departed this life on January 25, 2018, in Carrizo Springs, Texas, at the age of 93 years and 5 months. He was preceded in death by his wife of 71 years, Mary Louise (Sissy) McClendon Martin. He leaves behind one son, Bill Martin (wife Pamela) of Carrizo Springs, and three daughters, Marilu Martin of Carrizo Springs, Nancy Martin of San Antonio, and Jeanie Martin Frasier (husband Bruce) of Carrizo Springs; four grandchildren, Jennifer Martin Stewart (husband Lee) of San Antonio, Mac Martin of Carrizo Springs, Rebecca Frasier (husband Michael King) of Austin, and Patrick Frasier (wife Gabrielle) of Austin, as well as two great grandchildren, Aidan Stewart and Clementine King. He was looking forward to the arrival of another great granddaughter in May of 2018. Wallace Martin was a child of the depression and orphaned by the age of 14. He lived with older siblings until he graduated from Hamilton High School in 1941. He then enrolled at The University of Texas, where he was a diver on the UT swim team. After Pearl Harbor, at the age of 18, he enlisted in the Army Air Corps where he was trained as a navigator on the B-17. In early 1943, he was sent to England as part of the prestigious 398th bomb group. During the next 15 months, he flew 50 missions over France and Germany. His B-17 was shot down during this time and he was hidden from the Germans by the French Resistance. Some of the notable missions he flew were Omaha Beach on D-Day, Dresden, and Peenemunde. He completed fighter pilot training in 1944, and was to be sent to the Pacific Theater in a P-51. Fortunately the war with Japan was concluded before that happened. He met Sissy McClendon on a blind date at the University of Texas vs. Texas A&M game in November of 1944, and they married the following June. After the war ended, he returned to The University of Texas and received his BS in Civil Engineering in 1948. He was a member of the Chi Epsilon and Tau Beta Pi honor societies. Following graduation, Wallace moved to Carrizo Springs, where he joined his father-in-law in operating Dixondale Farms. During his 70 years in Carrizo Springs, he was a school board member, a Company Commander of the local National Guard unit, a director at Union State Bank, a Scout master, and a math and physics teacher when the school district could not find one. He also worked with Texas A&M in the development of the Yellow Granex and 1015 Super Sweet onions. Wallace was an avid golfer and spent many enjoyable days with good friends at the golf course. He also continued his lifelong passion of working with wood, creating both large projects and small carvings. Wallace lived a long, interesting, and full life and remained active until the last few weeks of his life. He faithfully attended the First United Methodist Church and spent many hours on his ham radio talking to his fellow hams worldwide. He will be sorely missed, but our memories of him and his guiding influence will last the rest of our lives. Donations in his memory may be made to the First United Methodist Church, PO Box 301, Carrizo Springs, TX, 78834. Reverends Thad McGehee and Jacob Hunter officiated the service at First United Methodist Church on January 30, 2018, under direction of Leonard Funeral Home, a member of the International Order of the Golden Rule. Pallbearers for the service were Mike Campos, Mark Cartwright, Steve Hester, Tom Hester, Mack Mandell, Thad McGehee, John Petry, and Carter Speer. Honorary pallbearers were Ken Bradshaw, Betsy Tocquigny Campbell, Jeanelle Eardley Coleman, Dick Dobie, Becky Tocquigny Major, Erin Gardner Bowman, Tara Gardner Eastland, Sean Gardner Turner, Thetis Gardner LeMaistre, Dana Gardner Wilson, and Megan Gardner Pipes.

As a customer of Dixondale, I learned of Mr. Wallace Martin's life and passing. As an American, I honor and am grateful for Mr. Martin's service to his country. Men of his era cannot be matched. My condolences to his family and all who are feeling a loss. May warm memories of Mr. Martin remain in your hearts and carry you through difficult moments in the days to come.

Mr. Wallace was a great man that was thorough and passionate about just about anything and everything. It was done right and to completion, anything less than perfection was unacceptable. I got to see Mr. Wallace just about every day on the golf course when I was a young kid and never turned down an opportunity to listen to one of his many stories. They just don't make men like him anymore. He'll truly be missed and was loved by many including myself.

Wallace was a special friend to me.. Together we designed and he crafted the beautiful cross in the sanctuary. It was a labor of love for both of us. He will always hold a place in my heart. God bless his family.

A great man. He was so loved by my mother and father and so respected. I essentially HAD to go to UT because that is where Uncle Wallace had gone.

Never miss an update about Wallace. Sign up today.