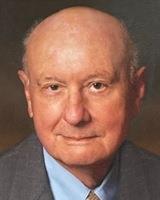 Not the right person? See All ›
AGE
92
LOCATION
Peoria, Illinois

William H. Marshall
PEORIA - William H. "Bill" Marshall, MD, a retired general surgeon with a long and esteemed history in Peoria, passed away on Wednesday, January 6, 2021. He was 92 years old.
Bill pioneered pediatric surgery in Peoria in the 1970s and was the inaugural Chair of the Department of Surgery at University of Illinois College of Medicine Peoria. Compassionate, highly skilled, beloved by the medical community and a role model to many, Bill was devoted to expanding the scope of surgical care in Central Illinois and mentored a generation of medical students and residents in the development of their practices.
A native of Serena, IL, Bill was born on April 17, 1928, the second of six children raised on a farm during the Great Depression. He graduated Phi Beta Kappa from University of Illinois Urbana in 1951, and received a master's degree in Pharmacology at University of Illinois Chicago in 1953. He graduated from the University of Illinois College of Medicine Chicago and completed his internship at University Hospitals. Bill served two years as a medical officer in the United States Navy aboard the USS Coral Sea, nicknamed the Ageless Warrior in honor of her long career. He returned to Chicago to begin his surgery residency under the renowned Dr. Warren Cole. While a resident, he proposed to Nancy Lou Dawson, who would become his wife of 62 years and mother to their five children.
Bill and Nancy moved the family to Peoria in 1964, where Bill joined Peoria Surgical Group and established a private practice that spanned 34 years. He became a faculty member in the Department of Surgery at the University of Illinois College of Medicine Peoria and rose to full Professor of Surgery and Chairman of the Department of Surgery from 1972-1982. Bill's clinical skills, teaching style and demands for excellence were legendary and he was named "Teacher of the Year" in surgery in 1988. Bill was a regional leader in surgery and served as President of the Peoria Medical Society, The Illinois Surgical Society and The Midwest Surgical Association. He was a Governor of the American College of Surgeons for six years and published 10 scientific papers in peer-reviewed journals. After his clinical retirement, Bill was appointed Corporate Director of Medical Services for OSF Healthcare and then Associate Medical Director of OSF Health Plans. Bill retired from his career in medicine at age 80 and continued to follow developments and engage with the medical community.
Together with Nancy, Bill was an avid American art collector, an appreciation that began in the early 1960s, when he would peruse the galleries at the Art Institute of Chicago to unwind after long shifts as a surgery resident. His enthusiasm led to more than thirty years of generous support of the arts in Peoria, through the Peoria Riverfront Museum and its predecessor, Lakeview Museum. Bill lent and donated many works, including "Fountain Group," a bronze casting by an artist with a personal connection to Peoria, installed in the Riverfront Museum's Sculpture Garden courtyard.
Bill was an inspiring, devoted, loving father and loyal husband. He delighted in the successes of his children and nurtured close relationships with his grandchildren. Even though he was in his ninth decade of life, Bill still had many active, engaging years ahead of him. He was an Ageless Warrior, personified.
Bill is survived by his wife, Nancy; sons, Daniel Marshall, PhD (Nancy) of Arlington, MA, James D. Marshall, MD (Susan) of Fort Worth, TX, and Jack Marshall, MD (Lisa) of Bloomington, IL; daughters, Julia Marshall of Oak Park, IL, and Mary Marshall Grace (Rob) of Napa Valley, CA; sister, Mary Marshall Ugianskis; brother, John Richard Marshall; grandchildren, Madeleine, Rodney, William, Charles, Nicholas, Nathan, Jamie, Eva and Isabelle; and great-granddaughter, Emmy Lucille.
The public is invited to the visitation and funeral mass on Tuesday, January 19, at St. Thomas the Apostle Catholic Church in Peoria Heights. Visitation is at 9:30 a.m., followed by the mass at 10:30 a.m. Private burial to follow.
In lieu of flowers, the family suggests memorial contributions to establish The William H. Marshall, MD, Professorship in Pediatric Surgery at University of Illinois College of Medicine Peoria. Contact Jennifer Gibbs, 309-258-2619, [email protected], for inquiries. The family also encourages support of the Peoria Riverfront Museum. Contact Anne Marie Miller, 309-863-3026, [email protected]
Friends and family may sign the online guestbook or leave their private condolences by logging on to www.wrightandsalmon.com.

Professionally, Dr. Marshall was highly acclaimed in all areas of teaching and in the practice of surgeon. Personally, we will always have fond family memories of Bill, his wife, Nancy and their five lovely and accomplished children who were classmates and friends of our children. We hold hold Dr. Marshall in the highest esteem and extend our deepest condolences to the family in his loss.

When it is said that Dr Marshall was very skilled and knowledgeable that would be an understatement. I watched in my much younger take expert care if the infants in OSF NICU.He was. Great teacher. I experienced his skills & Knowledge when he saw my daughter @ age 5 after being seriously injured in a car accident that killed my dad.. Dr Marshall assured me she would be fine. My daughter is her 40s now is fine He was an excellent physician. May God his family peace they need. You all are...

As a superior surgeon and former Chair of Surgery for University of Illinois at Peoria, Dr. Marshall understood the academic, as well as the medical practice community. Few people understand these combined missions. We have lost a mentor who always made others better. His leadership to me was always helpful and greatly appreciated. His absence is a great loss to us all.

U of I Emeritis Professor Norman C. Estes, M.D.

My deepest sympathies to the Marshall family. I went to school with Dan from 5th through 12th grades. He took after his father and was the smartest student in our tight knit class of thirteen at Sacred Heart School. I always admired how classy his parents were. They were so kind. My heart goes out to you at this troubling time.

Dr. Jack Marshall and family, please accept our deepest condolences with such a tragic loss and unimaginable grief.... our prayers are with you at this difficult time.

Bill had a great influence on my decision to become a surgeon after my father passed away during my college years. He was a true role model for many young physicians and surgeons who were lucky enough to call him a mentor. We remained close even after his retirement. Bill was a skilled surgeon, a dedicated teacher, a demanding taskmaster, and a kind and modest person. I remember his interest in history and the arts among his many admirable qualities. He has left an enduring legacy. Our...

Dr. Marshall was a meticulous surgeon, excellent mentor and teacher. He was a major influence in the lives and careers of many students and residents, including me.

I respected him and enjoyed scrubbing with him in surgery. God rest his soul.