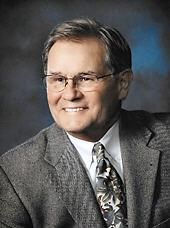 Parker, Ron
Everyone fortunate enough to know Ron Parker was blessed by his warmth and kindness. With humility and abundant generosity, he lifted his family, friends and everyone he touched. Ron passed away after a brief illness on July 5, 2015 at St. Joseph's Hospital and Medical Center in Phoenix, Arizona. He was 72. Ron and his wife Kathy moved to Gilbert, Arizona in 2013 to enjoy their retirement years. He was an avid and diverse reader. Barnes and Noble has lost a loyal customer. He was a deeply spiritual man and full of mischief and humor. He was constantly trying to improve his golf game but never got the back swing and waggle quite right. It didn't bother him too much. He loved his pickup which he bought so he could "haul stuff," and his favorite thing to haul was his grandchildren. Ron was a gifted watercolor artist, drawing inspiration from all of God's creations. The day he was hospitalized, instead of telling his sister he was ill, he sent her a picture of his left foot and declared it to be the most beautiful thing he had ever seen. He was one of a kind! Ron was born in Colorado Springs, Colorado on December 18, 1942. After graduation from Palmer High School in 1960, he received a B.A. in English and Sociology from Drake University, and a Master of Theology from Yale Divinity School where he worked as a psychiatric aide at Yale Psychiatric Institute. He was employed by the Urban League in Harlem, taught English in Samyek, Thailand and earned a Doctor of Ministry from Christian Theological Seminary. He was ordained by his mentor and dear friend, Dr. Warren Hile, in First Christian Church (Disciples of Christ) in Colorado Springs. Ron and Kathleen Workman were married December 22, 1968 in Laurens in the middle or a raging Iowa blizzard. His proudest accomplishments were their children, David and Kristin. Ron's first church was in Elmira, New York, where he was pastor of Central Christian Church. Five years later, his ministry took them to First Christian Church in Mooresville, Indiana. He became Associate Regional Minister of The Christian Church (Disciples of Christ) in Indiana in 1979, and in 1984 he was called as Senior Minister at First Christian Church in Bloomington Indiana. In 2000, Ron returned to his beloved Colorado as Executive Regional Minister for The Central Rocky Mountain Region. He retired in 2007. Ron was preceded in death by his parents, Earl and Lucille Parker. He is survived by his wife, Kathy; son David Parker (Deirdre), their children, Justin, Kaytlynn and Jacob; daughter Kristin Parker Simon (Christopher), their children Michael and Kayla; and sisters, Phyllis Parker Light (Michael Barbera) and Elaine Parker Barlow. A memorial service is planned for 11:00 a.m., Friday, July 10, 2015 at the Sun Lakes United Church of Christ, 9240 Sun Lakes Blvd., Sun Lakes, Arizona, 85248. In lieu of flowers, memorial contributions may be made to Tennyson Center For Children at Colorado Christian Home, 2950 Tennyson Street, Denver, CO 80212-3029.

Published by The Arizona Republic on Jul. 8, 2015.
To plant trees in memory, please visit the Sympathy Store.
MEMORIAL EVENTS
To offer your sympathy during this difficult time, you can now have memorial trees planted in a National Forest in memory of your loved one.
MAKE A DONATION
MEMORIES & CONDOLENCES
18 Entries
lll miss Rons kindness and wisdom all my days.
Lisa Hamilton
Student
July 2, 2020
I am forever grateful for Ron Parker in my life. Proud to claim him as a mentor.
Lisa Hamilton
Friend
July 4, 2019
Just a truly great guy. Warm and kind and smart. Prayers always from here for Kathy, David and Kristin. (Kristin's childhood playhouse is still in my back yard. Smiles.)
Jon Dilts
July 30, 2015
Ron was a wonderful, gracious man. We were lucky to have gotten to know him.
Ann Martin
July 22, 2015
Dear Family, We always dreamed of asking Ron to marry us. We will never forget his kindness to our Family.
Blessings from Keren and Jim Carley
James Carley
July 18, 2015
I still remember Ron baptizing my siblings and I at 1st Christian Church in Mooresville in 1975. He was the 1st church pastor I could actually relate to in a meaningful way. We missed him so much when he left us.
Dianne Neilson
July 17, 2015
Diane McGuire
July 16, 2015
I am forever blessed that Ron was in my life. He was my minister, mentor and spiritual advisor. He knew me better than I knew myself. The world has lost the finest of pastors and the wisest of men.
I'm praying for Ron and everyone he loves -- especially Kathy, David and Kristin.
Lisa Belcher Hamilton
July 10, 2015
Dear Kathy, Kristin, and David,
Jenny and I are full of sorrow to hear of the loss of your husband and father. Ron touched so many with his warmth, humor, and deep knowledge of the human condition. He will not be forgotten along with FCC in Bloomington for the welcome we received when we moved to Bloomington.
May you find comfort among family and many friends.

Jim, Adam, Cole, and I are terribly saddened by Ron's passing and we are carrying all of you close in our hearts. Ron was a gifted pastor and such a caring individual. He touched so many, many lives! May God's love comfort you and restore your peace in time.
Betsy Watson
July 10, 2015
Thinking of you Kathy! Mr. Ron was a wonderful person. I still remember the days he played with Megan. Hugs to you and your family.
Heidi Wampler
July 9, 2015
Everyone who knew Ron was a better person for it. He will be missed by myself and my family. I am so sorry for the loss to his family, and I pray that their memories of Ron will give them comfort.
Jim Watson
July 9, 2015
Ron was a childhood friend and we reconnected after the 45th high school reunion. He was a wonderful man with such insight on many things and was so very helpful with some issues we had. He had a gentle soul and will be missed by many. Prayers and blessings go out to his family.
Margy Hootman Smith
July 8, 2015
Thinking of Kathy and all who loved Ron. He gave so much to all of us.
Richard Daetwiler
July 8, 2015
Ron's passing is such a loss to so many people. We feel blessed to have known him. Rest in peace Ron, you will be missed. Our deepest sympathy
to Kathy and the entire Parker family.
Doug and Elaine Beaver
July 8, 2015
My heart is absolutely broken! I never met a more kind or gentle person than Ron. When you left Colorado for Arizona I knew that some day you would probably move back here as Colordo was your home. YOU WILL BE MISSED! <3 God Bless you and your family.
Kathy Conway
July 8, 2015
Showing 1 - 18 of 18 results