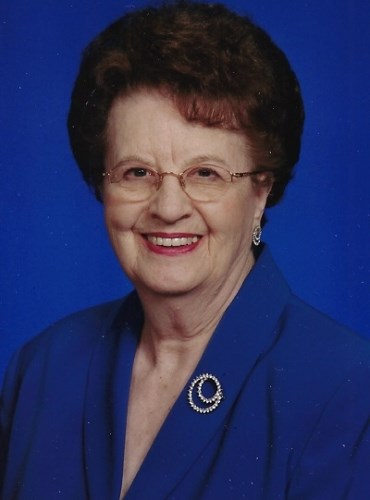 Opal Jean was born to Dr. James Oakley McFall and Ruth Marie (Catt) on March 7, 1924 in Flasher, North Dakota. She grew up attending the Flasher public schools, graduating in 1942. It was here she began her lifelong love of dancing.

On Oct. 28, 1943 Opal Jean married her high school sweetheart Leland Horton in Tacoma, Washington. To this union was born a son, Richard Lee Horton, and a daughter Sharon Eileen Horton.

They made their home in Bismarck, North Dakota. She worked at J.C. Penney, the North Dakota National Guard for 12 years, and finally as the manager of the Carousel Snack Bar and Great Hot Dog Experience in the Kirkwood Mall for 18 years. She retired on May 25, 1989.

Opal Jean and Leland were lifelong charter members of the Congregational Christian Church now called the United Church of Christ in Bismarck until Leland's death in 1988. She remained a member.

During her lifetime Opal Jean participated in the local bowling league for 20 years, winning many trophies. Her favorite hobby was ceramics, adorning her own home and that of many others with handmade ceramic decorations. She also was a member of the Bismarck Business and Professional Women's Club for 25 years where she served as president and various other offices. After retirement she returned to her love of dancing and participated with the Capital City Cloggers in performances throughout the state. The highlight of this experience was dancing on the capitol grounds during the North Dakota Centennial Celebrations in 1989.

On Nov. 3, 1990 Opal Jean married Leo Wayne Carlson of Washburn, North Dakota. The couple made their home in Washburn where they were very active in the Soil Conservation, the local church and square dance clubs. She also served as president of the Washburn Study Club. Leo passed away on Oct. 26, 2001.

In 2006 Opal Jean relocated to Las Vegas, Nevada to be close to her children and family. Here she became a member of the Daughters of the American Revolution with her daughter and played cards at the senior center with her son.

Private memorial services will be held later. Condolences can be sent to the family at 4771 Chama Court, Las Vegas, NV 89121.

To plant trees in memory, please visit our Sympathy Store.
Published by The Bismarck Tribune on May 4, 2021.
MEMORIAL EVENTS
No memorial events are currently scheduled.
To offer your sympathy during this difficult time, you can now have memorial trees planted in a National Forest in memory of your loved one.
MEMORIES & CONDOLENCES
0 Entries
Be the first to post a memory or condolences.