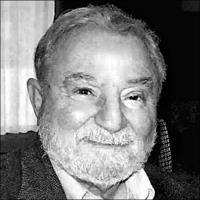 FUNERAL HOME
Brezniak Funeral Directors - Newton
1251 Washington Street
West Newton, MA
BOGRAD, Barry M. Of Framingham, MA, originally of Newton, MA, passed away on January 30, 2018 after a brave battle with cancer. He is survived by his beloved wife of 52 years Elaine (Wollock), his son Jeff and his wife Karen of Hopkinton, MA, his son Mark and his wife Brooke of Goffstown, NH, and his five grandchildren who he adored, Nicholas, Emma Samantha, Harrison and Brandon. He was the devoted son of the late Philip and Ida Bograd of Newton, MA. Barry was a graduate of Boston University and proudly served his country as a platoon leader, executive officer and company commander of the US Army's 109th Transportation Company in Stuttgart, Germany. Barry was an entrepreneurial risk taker, he was involved in many different worlds, from coaching high school football, to hosting many long running cable television shows, to being active in town politics, to being a published author and to owning a successful human resources consulting business. Human resources was his main profession for over 40 years, but music, sports, politics, his family and just being fascinated with people have been other passions throughout his life. Among a number of awards he has won, he is most proud of winning the 1997 Salute to Framingham award for his service to the youth of the town and the 2003 John D. Erdlen 5 Star Award for his outstanding contributions to the human resources profession. Services to be held at Temple Or Atid, 97 Concord Road, Wayland, MA, on Thursday, February 1, 2018 at 11:30 am. Burial to follow at Beit Olam - East Cemetary, 48 Concord Road, Wayland, MA. Memorial observances will be held at the residence of Elaine Bograd on Friday, February 2, 2018 from 2:00 pm to 4:00 pm and Saturday, February 3, 2018 from 7:00 pm to 9:00 pm. In lieu of flowers, remembrances may be made Parlin Hospice Residence, 10 Green Way, Wayland, MA 01778 or the charity of your choice.

Published by Boston Globe from Jan. 30 to Jan. 31, 2018.
To plant trees in memory, please visit the Sympathy Store.
MEMORIAL EVENTS
Feb
1
Funeral service
11:30a.m.
Temple Or Atid
97 Concord Road, Wayland, MA
Feb
1
Burial
Beit Olam - East Cemetary
48 Concord Road, Wayland, MA
Feb
2
Memorial Gathering
2:00p.m. - 4:00p.m.
the residence of Elaine Bograd
MA
Feb
3
Memorial Gathering
7:00p.m. - 9:00p.m.
the residence of Elaine Bograd
MA
Funeral services provided by:
Brezniak Funeral Directors - Newton
MAKE A DONATION
Please consider a donation as requested by the family.
MEMORIES & CONDOLENCES
16 Entries
Elaine, We are so very sorry to hear about Barry's passing.
Having grown up in Newtonville, and living two homes away from our home on Lowell Avenue, we played in the sandbox as youngsters, attended the Newton Public Schools together, and participated in many of the sports and the activities offered.
From day one, Barry has always been very kind, and very generous --- actively contributing his time and his talents for so many organizations.
Rest in peace Barry. You will be missed.
Martha Bilezikian McCool
August 2, 2018
I just wanted to say how much Mr. Bograd meant to me as young Pop Warner player in Framingham. He spent so much time and energy making the experience so special. I remember how nice he was to us. He even announced our games on the local cable channel. It was such a great experience to watch our football games being replayed on the channel. This was the late 70's and early 80's so it was so unique. Even as a young kid, I could appreciate what Mr. Bograd did for us and the community. He was so giving to the community and I still remember him 40 years later! Rest in peace Mr. Bograd, and may others follow your example!
Jim Pucillo
Acquaintance
March 2, 2018
To the Bograd family, I am so sorry to hear that your father has passed away! I played Pop Warner football back in the late 1970's, and though Mr. Bograd was not my coach, he and I became friendly anyway. I always admired his enthusiasm and passion for coaching Framingham kids the game of football. Even after I moved out of Framingham long ago, I always remembered Mr. Bograd as a wonderful and friendly man!
Tom Warren
Thomas Warren
Acquaintance
February 16, 2018
I was sad to hear of Barry's passing. He was such a special person.
My connection with him is different than all the others. My parents bought Barry's childhood home in Newtonville from Barry's parents. For years whenever we went down to the raw, cement walled basement I would see painted on the wall in bright gold "Barry Bograd".
Many years later I married and we settled in Framingham and I saw his name in the paper, but never did anything about it. One day I was at Victory Field and he was there, so I walked over and introduced myself and told him our connection. He smiled big and was so proud to meet someone that had lived there after him. He loved that we kept his name in the wall.
Barry was also pleased that we had moved to Framingham and our children were also playing soccer.
Hope this makes the family smile just a little. I'm sure he is very missed and wish you all peace knowing he was so cared about.
Sandy Schlosberg
February 6, 2018
I just found out about Barry's passing. He was a great friend..always upbeat when we covered Framingham North and Framingham South football games on cable. The only time he got a little crazy was when your son intercepted a pass and returned it in to the end zone..He was a little wound up when the officials turned it back...that was in 1986....I wish I knew he was sent up to heaven ..a great guy/ a rock solid friend.

Sorry for your loss Elaine and your family's as well.

Jeff Bakstran
Jeff Bakstran
February 6, 2018
What a great guy! Elaine and boys, Kathy and I were out of the area and missed hearing of Barry's passing. We are so saddened. He was a legend. I think of our old youth soccer days with Fram. United.

Rest in Peace, Barry
You did it all.
John Buckley
February 5, 2018
Barry brought a great deal of joy and happiness to all who knew him. He was a friend, colleague, advisor and a man of many talents. We will all miss his wonderful stories and love of life. May his memories bring comfort and peace to his family.
Brian McDonald
February 5, 2018
Barry, was a friend,collegue and trusted mentor. He has helped me to guide my career. He was always ready to help, share a story and provide advice. May God keep his soul close to Him because that is where Barry belongs.
ken Kimball
February 1, 2018
We pray the love of God enfolds you during your journey through grief. We send you thoughts of comfort and peace. Be Well XO
Cheri Barnes
February 1, 2018
The Bograd Family ~
So sorry to read of Barry's passing. I haven't seen him in years but when I was involved with the town, I always enjoyed our talks. He loved talking about BU hockey. Though our relationship was a professional one, I always considered Barry a friend. May he rest in peace. My thoughts and prayers are with his family.
~ John Acton
Framingham
February 1, 2018
Relatives and friends can be assured that God hears your heart, sees your tears, knows your profound grief...and will provide the tailored comfort, individually, according to it's depth...
...May the widow, individually, be comforted according to her unique circumstance, one day at a time..
Matthew 6:34..1Peter 3:8...
There is no grief that can surpass God's amazing comfort, healing, or trauma...

Please accept my sincere condolences for the loss of your dear loved one. May you find comfort, peace and hope in the weeks and months ahead. 1 Cor. 1:3-4 and 1 Cor. 15:26.
M. Greene
January 31, 2018
It's been almost 9 years since I've worked with Barry, but I still remember him fondly. I called him "coach" when he came in for exercise. A great guy who will be missed, deeply.
My sincerest condolences to the family and friends.
Kevin Cheng
January 31, 2018
We were so very sorry to learn of Barry's illness and subsequent death. May his memory be for a blessing to all who knew and loved him. Joan & Lenny Aronson
January 31, 2018
Condolences from the Grob Family. Our visits were always a memorable event as our families grew up in Sudbury MA and NH. Barry was always interested to share family updates when we called, as distance would separate our visits. A lifetime of professional and community contributions, may these memories comfort all those that knew Barry.
Pamela & Laurie Grob Santa Fe, NM
Bethany Winder - Colorado Springs, CO
Kenneth Grob - Tashkent, Uzbekistan
Pamela & Laurie Grob
January 31, 2018
I am so sorry for the loss of your loved one. Please find peace and comfort in Psalms 119:7.
January 31, 2018
Showing 1 - 16 of 16 results