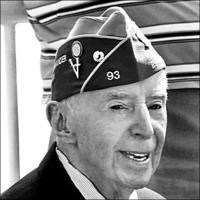 FUNERAL HOME
Urquhart-Murphy Funeral Home
800-812 Greenwich Avenue
Warwick, RI
McCARTHY, DONALD, A. W.W. II VETERAN U.S. ARMY 93, of North Smithfield, RI, formerly of Warwick, RI died Tuesday, August 1, 2017 at Landmark Medical Center. He was the beloved husband of 70 years of Elaine M. (O'Shea) McCarthy. Born in Boston, Donald was a son of the late William A. and Doris M. (McArdle) McCarthy. Donald was employed as a Communications Manager for the former New England Telephone Company at the Newport Naval Base as well as Quonset and Davisville Bases and later was a Communications Manager for Amtrak. He was also the owner and operator of Atlantic Marble Restoration for ten years. During World War II, Donald honorably served in the 1st Battalion 116th Regiment 29th Infantry Division of the US Army. He was the Commander of the 29th Division Association from 1995-96 and made 14 visits to Normandy. On July 24, 2014, he was awarded the French Foreign Legion of Honor in Normandy. Donald was a communicant of St. Francis of Assisi Church in Warwick. He was also a member of the Board of Directors at Save the Bay and a member of the Providence Rotary and the Providence Chamber of Commerce. Prior to residing in RI, Donald lived in Needham, MA where he was active in St. Joseph's Church and the Knights of Columbus. Donald was also a resident of Bristol, RI from 1962 – 1977 and an active communicant of St. Mary Parish. In addition to his beloved wife, Donald is survived by four loving sons: Donald A. McCarthy, Jr. (Denise) of Portsmouth, RI, James I. McCarthy (Janet) of Charlestown, RI, Raymond M. McCarthy of No. Kingstown, RI and William A. McCarthy (Emily) of Exeter, RI; ten grandchildren and seven great-grandchildren. His funeral will be held on Monday, August 7, 2017 at 10 AM in St. Francis of Assisi Church, 596 Jefferson Blvd., Warwick. Full military honors will be bestowed immediately following the Mass and burial will then take place in Belmont Cemetery, Belmont, MA. Relatives and friends are invited and may call at The Urquhart-Murphy Funeral Home, 800 Greenwich Avenue, Warwick on Sunday, August 6, 2017 from 3 PM – 7 PM. In lieu of flowers, gifts in his memory may be made to: St. Francis Church, 596 Jefferson Boulevard., Warwick, RI 02886. www.murphyfunerahomes.org.

View the online memorial for DONALD, A. McCARTHY

Published by Boston Globe from Aug. 3 to Aug. 4, 2017.
To plant trees in memory, please visit the Sympathy Store.
MEMORIAL EVENTS
Aug
6
Calling hours
3:00p.m. - 7:00p.m.
Urquhart-Murphy Funeral Home
800-812 Greenwich Avenue, Warwick, RI
Aug
7
Funeral
10:00a.m.
St. Francis of Assisi Church
596 Jefferson Blvd, Warwick, RI
Funeral services provided by:
Urquhart-Murphy Funeral Home
MAKE A DONATION
MEMORIES & CONDOLENCES
6 Entries
So sad to hear of This great mans passing, i had the honor to meet him in my home county of Cornwall uk where he visited trebah Gardens, (polgwidden cove as it was known in the 40's) on the DDay anniversary of which is where i believe he departed for Normandy. I nervously approached him and shook his hand and thanked him for putting his life on the line as i would not be here today if it wasn't for him and the brave men of his generation. I felt nervous because to me this was one of the greatest men i would ever have the chance to meet, an absolute hero although they didn't like to be refered to as heros but they are. I will never forget him RIP
Robert eddy
Other
July 12, 2021
Words fail me now, Don McCarthy was simply a superb and wonderful person. I am grateful to have known him, and to have spent precious time with him.
My prayers are with you all.
Marsha Smith
Normandy Allies
Marsha Smith
August 8, 2017
Rest in Peace Mr. McCarthy. May the angels hold you in their arms. Thank you for your Service to our country.
Meg Kelliher
August 8, 2017
A kind and gentle man. He will be missed.
Ron Plante
August 5, 2017
We were privileged to have met Don and we are sending deepest sympathies to all your family as you will miss this special man..... with love, all the Weber Family
August 4, 2017
Ernest Corvese
August 3, 2017
Showing 1 - 6 of 6 results