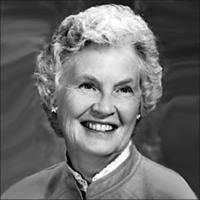 BORN
1922
DIED
2021
FUNERAL HOME
George F. Doherty & Sons Funeral Home
477 Washington Street
Wellesley, MA
CONWAY, Elizabeth "Betsy" (Chafee) Age 99, of North Hill, Needham, and Sorrento, ME, died peacefully October 10, 2021. Family and friends lost their family matriarch, filling all those around her with love, laughter, and music. Woe be to those who would challenge her at golf, tennis, badminton, or croquet! Uninformed with divergent political views had to be ready to defend themselves! Born Sept. 5, 1922, in Barrington, RI to parents Henry S. and Dorothy (Gladding) Chafee, she graduated from Mary C. Wheeler School, Dwight School, and Radcliffe College. She spent two of her primary school years in Switzerland where French became her primary language and skiing and hiking her passion. She would move from Providence and Barrington to the suburbs of Boston (Weston, Wellesley, and Needham) but her home was always her summer place in Sorrento, ME. Everyone would know she was in residence when the American flag flew. Joys in Betsy's life were her extended family and friends, music, sports, traveling, and her country. For much of her life she had two pianos in her living room. She would entice anyone into duets, no matter what skill level. For family and friends, there would always be singing childhood songs. Betsy organized Forty Forte Fingers for two pianos and four ladies in Barrington, joined a group of pianists in her Boston area, and played at North Hill, Needham. She also played the organ at The Dover Church and for more than four decades at Church of the Redeemer, Sorrento. All along, she would contribute music to Bagaduce Music library to include her compositions of two piano, eight hand music. Betsy was an avid golfer known for never getting in trouble on fairways and deadly eye around the greens. Playing until her 90's, her record of wins at Blink Bonnie Golf Links, Sorrento, will probably never be matched. She was the first female member of the Barrington Republican Town Committee, member of League of Women Voters, and active in Wellesley Republican politics where she met husband Frank Conway. Together they would attend many national Republican Presidential Conventions. With Frank, friends, and later her children, she would travel the world enjoying the sights, cultures, and people, but her favorite places always remained Sorrento, American Southwest, and Switzerland. Predeceased by husband Frank H. Conway, she is survived by four children Arthur C. Lee (Helen), Sherrill L. Rosoff, William Jed Lee (Ann), and Henry C. Lee (Maureen), nine grandchildren, and thirteen great-grandchildren. Services to be held 2PM on Nov. 7, 2021, at The Dover Church, 17 Springdale Ave., Dover, MA to be followed by a private interment. Vaccinations and masks requested in Betsy's honor. In lieu of flowers, donations in Betsy's memory may be made to Bagaduce Music, 49 South Street, Blue Hill, ME 04614, or Sorrento VIA (Blink Bonnie Golf Links), PO Box 343, Sorrento, ME 04677. For online guestbook, gfdoherty.com George F. Doherty & Sons Wellesley 781 235 4100